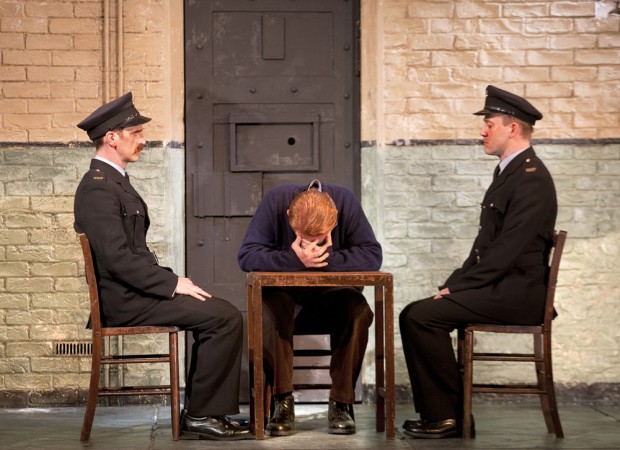 The Critic is beginning to wonder whether his new persona is really up to the job. I mean, he must be the only individual on the planet who hasn’t been interested in this summer’s West End mega-hit, Harry Potter and the Cursed Child (Palace Theatre), which is already one of the most successful shows ever. In fact, its playtext, by Jack Thorne, claims to be the fastest selling drama in history. Shakespeare must be turning in his grave. But there again our Critic isn’t that keen on any flavour of the month, be it Florian Zeller’s latest play or Damon Albarn’s latest musical. Still, as John Osborne’s Archie Rice used to say, “Oh, well, I have a go, don’t I? I ’ave a go.”

Maybe it’s a sign of age, muses our fictional persona, that the big openings and award-winning plays leave him cold: in particular, three of the main Royal Court offerings failed to thrill. The first was Martin McDonagh’s Olivier-award-winner Hangmen (2015), which tells the story of Harry, one of Britain’s last executioners, and takes place on the day that capital punishment was abolished in 1965. Set in Harry’s pub in Oldham, it brings together Harry, his wife and daughter, his assistant Syd, a bunch of chronies and an interloper from the south, the long-haired Mooney, in comedy whose laughs come from jokes aimed at northerners, at blacks, at women and at gays. The working class is mocked; so are the Germans. So are fat people. And deaf people. If this moronic insularity can win so many awards, thinks the Critic, you can see why British people voted for Brexit. No amount of celebrity casting — David Morrissey (Harry) and Reece Shearsmith (Syd) — can compensate. And yet. Should the Critic lighten up? Why’s he taking all this so seriously? Does it matter that the Court is wasting our time on popular drama that is lazy, cynical and leaves a bad taste in the mouth?

And then there was Penelope Skinner’s Linda (2015). Here the off-stage drama almost outdid the staging: Kim Cattrall was due to star, but withdrew at the last minute for medical reasons. So her place was taken by Noma Dumezweni, an Olivier-award-winning performer who incidentally is starring as Hermione in the Harry Potter play. After only 10 days rehearsal, she bravely took on the title role of the 55-year-old Senior Brand Manager for the Swan Beauty Corporation, whose tribulations at home and in the workplace make up the play’s story. Linda is a monster of a character, a highly successful and award-winning woman who falls spectacularly from grace. Her self-absorption, self-belief and self-worth are brilliantly portrayed by Dumezweni. The only problem is the playwriting. Skinner’s storytelling is disappointingly drawn out, predictable and banal. A lot of the dialogues are over-explanatory, and the themes about body image, older women and intergenerational conflict are stated and restated with woeful repetitiveness. The result is three hours of plod. Ghastly.

The third Royal Court disappointment, in a year during which this venue vaguely celebrated the 60th anniversary of Look Back in Anger, is Anthony Neilson’s Unreachable (2016), where celebrity casting once again failed to save the day. This time it was Matt Smith, a former Doctor Who, who sold out the play. Devised with the aid of the cast by the playwright, the story centres on Maxim, a self-destructive film director who is now shooting a dystopian drama. From the start, Maxim seems to be intent on sabotaging his own movie. The main problem with Unreachable is that there are at least three plays crammed into one show. One is a frankly vulgar comedy of manners in which film folk are satirised and sexual jokes rebound around the set. Another play is Maxim’s (Terrence Malick-style) search to express the inexpressible, to create a work of art that feels like a complete summation of life. While this is presented with a blend of ironic pretentiousness and genuine seeking after art, the serious side of the evening is sabotaged (Maxim-fashion) by the comedy, which turns into the third play, a hilarious farce. Although almost completely uncontemporary, it is funny — that’s its triumph and its chief flaw.

Elsewhere, at the Hampstead Theatre, three plays explored historical themes — a sure sign thinks the Critic that playwrights are losing touch with the now. Ian Kelly’s Mr Foote’s Other Leg (2015) revisited 18th-century London, and the career of Samuel Foote, one of the larger-than-life figures of the age of Garrick, who became a metropolitan celebrity for his wild mimicry and satirical skits, often performing in drag. In 1766, while riding with Prince Edward — younger brother of King George III — he is thrown from his horse and has his left leg amputated. Despite having the gift of the irrepressible Simon Russell Beale playing Foote, which guaranteed a transfer to the suitably Georgian Haymarket Theatre, Kelly’s play is too longwinded and too elaborate. By contrast, David Hare’s charming The Moderate Soprano (2015) tells the story of John Christie, an eccentric English businessman who in the 1930s decided to build an opera house next to his home in Sussex, thus creating Glyndebourne. Helped by his wife Audrey, an opera singer whose rather thin timbre led to her being dubbed a moderate soprano, Christie also employs refugees from Nazi Germany. But although Hare shows the vital role of foreigners in the creation of British art, this play is less biting, less angry, than some of his other work. Finally, Howard Brenton’s Lawrence after Arabia (2016) focuses on the early 1920s when Lawrence returned from leading the Arab Revolt. Now a national hero, England loves him, but he doesn’t love England. Having changed his name to Ross, he is hiding out in the house of George Bernard Shaw, and working as an ordinary airman in the Royal Air Force. This rather undercooked drama, thinks the Critic, feels more like a tantalizing mirage than a nourishing oasis. Politically, the play lacks debate, and avoids all discussion of Islam. It feels underwritten and the overall effect is one of mild disappointment.

Undernourished by historical fare, the Critic reflects that his main joy in the past year has been two leftfield plays by veteran playwright Caryl Churchill. At the National Theatre, her Here We Go (2015) is a meditation on death and aging that has one of the most excruciatingly powerful scenes in contemporary new writing: helped by a carer, an old man undresses, then dresses and then undresses again. And again. And again. Wordlessly. Even better is her Escaped Alone (2016), which begins as a meeting of four seventysomething women in a garden, and gradually blooms into a visionary play about environmental disaster and social collapse in which language buckles under the strain of imagining a universe of horror. James Macdonald’s hallucinatory Royal Court production featured a beautiful moment when the four women sang a lovely version of The Crystals’s “Da Do Ron Ron”. Likewise, two other sci-fi offerings — Alistair McDowall’s X (Royal Court, 2016) and Philip Ridley’s Karagula (Styx, 2016) — explored the epic possibilities of the human imagination with stories of other worlds and the relationship between inner and outer space. Yes, thinks the Critic, they are my definition of theatrical pleasure.

Of the National’s new writing contributions, only two stand out. The first is Duncan Macmillan’s award-winning People, Places and Things (2015), a case study of what it feels like to be a drink and drugs addict, in which Denise Gough gave an outstanding performance as Emma, a smalltime actress on the skids. Her performance gave the play an enormous boost, helped paper over some of the cracks in the writing, and ensured a West End transfer. The second is Alexi Kaye Campbell’s Sunset at the Villa Thalia (2016), a drama which used a small house on a Greek island as a metaphor for Greece during the military dictatorship of the 1960s and after. As usual, there have also been a handful of small, but powerful plays that stick in the memory. David Ireland’s Cyprus Avenue (Royal Court, 2016) explored the mindset of Ulster Loyalism with a strong mix of hilarity and horror, while Charlene James’s Cuttin’ It (Young Vic, 2016) denounced the practice of Female Genital Mutilation with passion and heartfelt feeling. By contrast, Hassan Abdulrazzak’s Love, Bombs and Apples (Arcola 2016) took a humorous glance at Middle East politics through the optic of sex, while Jon Brittain’s Rotterdam (Trafalgar, 2016) found unexpected amusement in its story of a transgender lesbian. The Critic hates lists, but he’s a practical man so here is his string of new names worth looking out for: Barney Norris, Brad Birch, Anna Jordan, Stef Smith, Phoebe Eclair-Powell, Tess Berry Hart and Cordelia Lynn.

Some of the best work that excited the Critic came from outside London, and visited the National: Gary Owen’s Iphigenia in Splott, about a single working-class woman, from Wales; Lee Hall’s Our Ladies of Perpetual Succour, about a convent school choir, from Scotland; and Jack Thorne’s The Solid Life of Sugar Water, about a couple who lose a child, from Plymouth via Graeae. On the other hand, the new generation of 2000s playwrights have proved a bit disappointing this year (short titles bad, longer titles good): Mike Bartlett’s Wild (Hampstead, 2016) was too thin and unconvincing to be a good portrait of Edward Snowden, Nick Payne’s Elegy (Donmar, 2016) was too short to delve deeply enough into its account of love and memory loss, and Leo Butler’s Boy (Almeida, 2016) was too inarticulate a snapshot of underclass teen life to be either informative or engrossing.

Since the Critic loves sensation, he was always going to love two psychological thrillers, both transferring from the Hampstead Theatre studio to the West End: James Fitz (Four Minutes Twelve Seconds) and Morgan Lloyd Malcolm (The Wasp) arrived at the Trafalgar Studios with a bang. Less noisy, but similarly thrilling, Simon McBurney’s The Encounter — an adaptation of the story of Loren McIntyre, a photographer for National Geographic magazine, who got lost in the Amazon rainforest while seeking the Mayoruna tribe — had a run at the Barbican before embarking on a world tour. The Critic would like to finish this piece with this masterpiece, but he can’t. Instead he must record that, after the vote in June to leave the European Union, he was grimly amused to see that Stephen Laughton’s Screens (Theatre 503), about a 25-year-old gay British Cypriot, included a mention of Brexit. The first perhaps. But surely not the last.