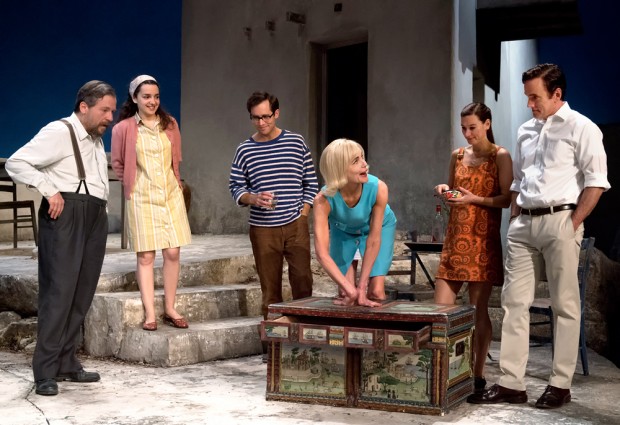 Greece has had a bad press in recent years. A land that used to conjure up visions of lazy days on sun-soaked islands, with summer food and warm seas, now just reminds us of the migration crisis, bodies in the water and economic collapse. The country is used as an example of the failure of the Euro, and of the iniquity of the IMF. It is a place of poverty, and riots; a basket case; a warning; a symbol of the age of austerity. Now Elizabeth McGovern, who sheds her Edwardian Downton Abbey garb for groovy 1960s wear, stars in a play about Greece that explores that country’s troubled postwar history in the decades before the current meltdown.

April 1967, and the Mediterranean sun is blazing down on a peasant cottage on the Greek island of Skiathos. It’s being rented by an English thirtysomething arty couple, playwright Theo and actress Charlotte. After a chance meeting, they invite an older American pair, Harvey and June (McGovern splendid in a bottle-blonde wig), over for drinks. As the alcohol flows, it emerges that Harvey is not just an excitable word junkie, but also that he “works for the Government” (code for CIA). When the Greek owners of the cottage arrive, on the eve of emigrating to Australia because of their country’s poverty, Harvey suggests that Theo and Charlotte should buy the house.

As night falls on the soon-to-be-renamed Villa Thalia, the themes of the play creep out of its cellar: the influence of America on nations where many support, or have supported, the Communists (the programme tells us that while the couples chat a right wing military coup is taking place in Athens); the power of finance; the role of art in articulating the anxieties of society; and the manipulative power of language, especially the language of persuasion and fantasy (spin, if you like). Just how much has the charismatic Harvey been involved in the coup? And why is he helping this rather undistinguished English couple?

For answers we have to wait until the second half of the evening, which is set in 1976, after the fall of the colonels and the start of a new democracy. McGovern, who as Harvey’s drink-guzzling wife doesn’t have much to do in the first half, soon blossoms in the second, with some great comic timing and bright one-liners, all delivered in that familiar silky voice. The addition of two little English children lightens the mood. Then, once again, the atmosphere darkens as the sun sets, and old scores, both personal and political, are finally and dramatically settled.

Alexi Kaye Campbell writes with an appealing facility, and there is good balance between jokes and more serious passages. I also loved the contrast between the characters, Harvey the word magician who represents American world dominance, June the airhead whose vulnerability and pain shows the nether side of this enterprise, Theo the rather ineffectual creative and, best of all, Charlotte the truth-telling English moralist who bites off more than she can chew. I particularly liked the fact that Harvey is no cardboard villain, and that he is able to make his points strongly. Added to this, the metaphor of the house, as well as vivid political images (such as that of the lone Chilean mother who keeps calling for her disappeared pianist son after the military coup of 9/11 1973), are beautifully resonant.

Simon Godwin’s excellent production finds a convincing mix of social comedy and Greek tragedy, and there are some wonderful moments, such as the dance sequence. The cast bring out the fun as well as the pathos of this tale of cultural appropriation and middle-class guilt, with good performances not only from McGovern, but also from Ben Miles (Harvey), Pippa Nixon (Charlotte) and Sam Crane (Theo). Hildegard Bechtler’s heavy concrete set, with its looming edifice, forms a solid background to what is surely Kaye Campbell’s most heartfelt play. If some moments in the first half feel a touch hurried, the climax, however predictable, delivers on its promise. Yes, this is a well-written state-of-the-nation play where not only Americans but Brits too are indicted for exploiting poorer countries.