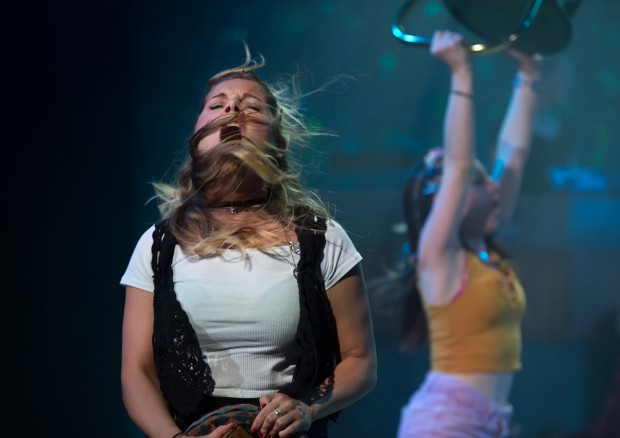 If you just love the feeling of leaving a show, surrounded by the gently glowing faces of happy fellow audience members, then this is one for you. It’s a musical evening full of joyful singing — mixing classics by Mendelssohn and Bartok with a best-of chunk of the back catalogue from the Electric Light Orchestra’s Jeff Lynne — that transports you to a different world. If not, then you might consider getting a heart transplant. Adapted by Billy Elliot author Lee Hall from the 1998 novel Sopranos by Alan Warner, it delights with its onstage music and raucous lust for life, and offers an exceptionally exhilarating explosion of swaggering joy and rampaging excess.

Set in the Mantrap, a rather scuzzy nightclub somewhere in Oban, the play tells the story of six 17-year-old convent schoolgirls, from Our Lady of Perpetual Succour, who travel as a choir to take part in a singing competition in Edinburgh. On the way, the girls have a series of adventures, which mainly involve drink and sex and drugs and rock ’n’ roll, and each experiences changes that mark a decisive step towards adulthood. It’s a powerful metaphor of growing up, and an equally compelling evocation of that moment in teen life when you’re secure as part of a school class, yet ready at last to break out into the wider world. Indeed, it sometimes feels as if it’s not succour these lasses need, but restraint.

Each of the six has a distinct mix of vulgar energy and vulnerability. There’s the leader Fionnula (Dawn Sievewright), whose sexual confidence hides a deeper uncertainty; Kylah (Frances Mayli McCann), who sings in a band but has doubts about fame; Chell (Caroline Deyga), whose brash confidence conceals an experience of loss; and then there’s the thin, sickly Orla (Melissa Allan), a victim of cancer who has been cured by a trip to Lourdes; the posh Kay (Karen Fishwick), a goody-goody with a devastating secret; and finally the punky Manda (Kirsty MacLaren), a wild girl who suffers from depression. The young Scottish cast — playing not only their own characters but a host of walk-on parts — have a really great onstage rapport, and are clearly having the time of their lives. Their singing is both heartwarmingly sweet and stompingly raunchy.

Okay, anyone who has actually met a 17-year-old schoolgirl won’t be convinced that this is a realistic portrait of teen awkwardness. Instead, it’s a blatant manifesto of freedom and self-realisation, complete with a finger-wagging ending about being yourself, a prelude to the sound of the dulcet strains of Bob Marley’s confident refrain of “Everything’s gonna be alright” from “No Woman, No Cry”. Does this matter? Nope. For the hyper-critical, this show will not only be a fantasy, but a male fantasy at that. It’s got a touch of voyeurism in its dreamlike unreality. Does this matter? Nope. What the show triumphantly, and I really mean triumphantly, captures is the sheer exuberance of being 17. Immortal; invincible. It’s about a spirit, a feeling. It’s not a documentary.

There’s a neat contrast between the small-town life of the six and their explosion onto the scene of the big city, and pretty soon the problems of growing up — unwanted pregnancy, sexual confusion and fear of death — come storming onto the stage. But the girls blast these difficulties away with their singing, their dancing and the sheer energy of their performances. A small onstage band, led by Amy Shackcloth, is a great help, and the goosebumps provoked by the songs are a sure sign that this show is hot, hot, hot. The more serious issues about Catholic guilt being imposed on impressionable minds are introduced but don’t linger too long, and the ending has a couple of genuinely sad moments that are well earned and convincing.

Vicky Featherstone’s wonderful production, co-produced by the National Theatre of Scotland and Live Theatre, and which was first seen in Edinburgh last year, has all the flamboyance, hilarity and theatricality that seems to typify Scottish stages at the moment, and the evening is funny and touching and thrilling, all at the same time. A big part of the effect comes from Martin Lowe, who has brilliantly sourced and arranged the music, while Chloe Lamford’s design oozes the stickiness and stink of spilled alcopops, all overlooked by a statue of the Virgin Mary whose heart glows red at crucial moments. (Lowe’s arrangement of the ELO’s “Don’t Bring Me Down” is thrillingly, and unforgettably, brilliant.) Unless you really mind that the story seems set in a nostalgic past when schoolgirls had no mobile phones and sallied forth with the battle-cry of “We’re going mental!”, this is an evening that is life-affirming, ridiculously funny and completely alive — little short of miraculous.