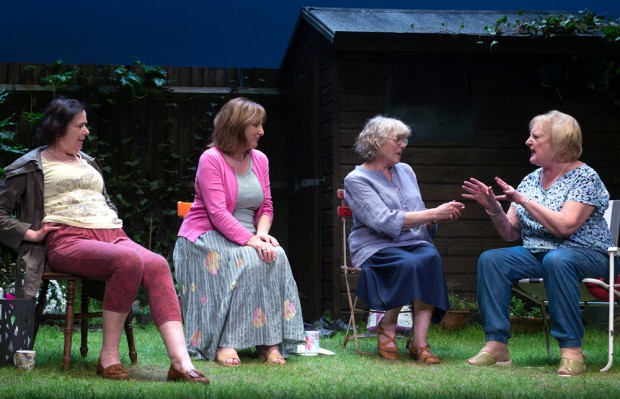 Caryl Churchill is phenomenonal. Now 77 years old, she remains not only prolific but also immensely inventive, having notched up more than 35 original plays, many of which have been innovative in form and imaginative in content. Added to this, she has penned dramas for radio and television, as well as adaptations of the classics. She also retains the power to annoy: the National Theatre’s staging of her Here We Go last autumn provoked walkouts and howls of critical derision. So what’s her latest like?

In common with some of her other most intensely vivid plays — I’m thinking of Far Away, Drunk Enough To Say I Love You? or Love and Information — it mixes the banal exchanges of everyday life with a more troubling, and troublesome reality. It also shows how language buckles under the pressure of horror and opens out into the landscape of the imagination where there is no limit to possibilities and therefore no limit to fear. This instantly recognisable place could be called Churchillia, a land, a world, of infinite nightmares that lies as close to prosaic daily reality as the head is close to the pillow during unquiet sleep.

The story of this 55-minute play is deceptively simple. Three old women — the stage directions specify that they should be “all at least 70” — spend afternoon after afternoon having tea in a small backyard. They are Sally, an ex-GP whose place this is, and her old friends Vi (ex-hairdresser) and Lena (ex-office worker). Their neighbour, Mrs Jarrett (ex-lollipop lady), pops in every day to have tea, biscuits and a chat. As you’d expect, they talk about all the normal things that people talk about.

About their children, about family members, about television shows and television series, about aches and pains, and where they keep their keys, being good at sums, the state of the local shops, about food, about hair, about other neighbours, racial prejudice… And so on. And so on. At one point, they sing a lovely version of “Da Do Ron Ron” (originally by The Crystals). Sublime. The atmosphere is dreamy, relaxed, chatty, with sentences left half finished or interrupted as memories decay with age and intimate knowledge of each other dictates that most of what is said is already well known. Or is it?

For through the cracks of this banal situation there seeps a parallel universe of horrors. Just as Churchill’s Far Away finished on a visionary speech where every element of the universe was engaged in total war with everything else, so here Mrs Jarrett steps out of the buzzing red-lit frame of the afternoon in the garden to tell us seven scenarios of catastrophe and chaos. These monologues are heightened contemporary versions of the ten plagues of ancient Egypt (the play’s title is, after all, from the Book of Job) and they offer a wildly imaginative illustration of the culture of fear during the currently ongoing war on terror.

The first begins “Four hundred thousand tons of rock paid for by senior executives split off the hillside to smash through the roofs, each fragment onto the designated child’s head.” Nature and humankind become monstrous and the terror lurks just under the surface of normality; horror is both humorously absurd and unacceptably disgusting; the deaths and diseases pile up. No one is safe; no one is immune; the Earth is slowly dying. And humankind, not the Bible, is responsible. At the same time, the casual chats in the sunny backyard also turn ugly, as it emerges that one of the women once killed someone.

Churchill also offers quick peeks into the subjectivity of each of the women, revealing more worlds of anxiety, phobia and neurosis, as well as apocalyptic frightmares. The essential solitude of the human subjectivity comes across strongly — all of these women are alone in the world. So as the sunny lawn in the backyard — designed with a sense of hallucinatory brightness by Miriam Buether in James Macdonald’s meticulous if emotionally rather cool production — becomes darkened by passing clouds so the mental landscape of Churchillia is o’ercast by gloom. Each of the props, whether it’s the tea tray or the toys of the grandchildren, the garden hose or the wooden shed, seems to be hiding grotesque secrets and telling ghastly tales.

You could quibble that the form of the play — scenes of four women chatting followed by solo monologues by Mrs Jarrett — rapidly becomes a bit predictable and that nothing really vertiginous happens, but it’s hard to fault the performances of Macdonald’s cast, although they seem more youthful than the text specifies. As Mrs Jarrett, national treasure Linda Bassett brings a Cockney matter-of-factness into querulous proximity with tales of outlandish horror, while each of the other women — Deborah Findlay (Sally), June Watson (Vi) and Kika Markham (Lena) — also perfectly convey the brutal flipsides of their otherwise summery dispositions. All in all, this is a magnificent show which demands repeated viewing to reveal its full richness.