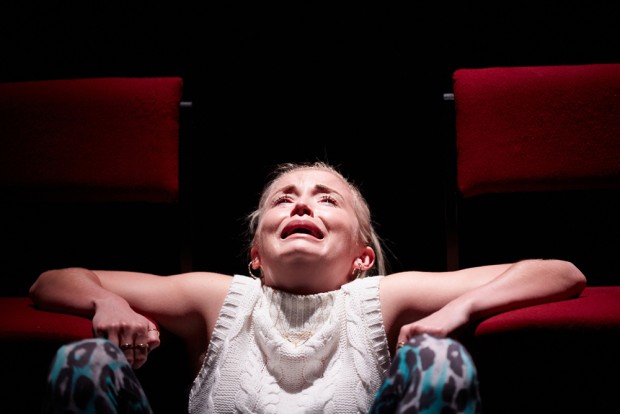 Some of the best theatre in London at the moment has its origins in other parts of the UK. At the Royal Court, Anna Jordan’s Yen has come storming in from Manchester’s Royal Exchange Theatre, while two other shows have a proudly local provenance, and have blown into London from the West of the country: they are Owen Sheers’s Pink Mist, which arrives from the Bristol Old Vic, and Gary Owen’s Iphigenia in Splott, which comes in from the Sherman Theatre in Cardiff.

There are other similarities between these two: they are both narrated tales of the underclass, that part of the working class that respectable citizens fear, and much of our culture demonises, and they both feature injured soldiers. And both are overtly compassionate and overtly political. Owen’s play, which relocates the ancient Greek myth to a district in Cardiff, is a monologue in which Effie, a young unemployed woman, gives us a hectic tour of her bruised and battered life.

Although at the start Effie stresses that for this show we the middle-class audience will be grateful, “you are all here to give thanks”, at first it seems that we are just here to gawp. Because her life is awful. Really bad. She gets hammered every night, she has horrendous hangovers and she is a no hoper. Surplus DNA. A bucket for alcohol and drugs. Subsisting on handouts from the state and from her Nan, she is senselessly promiscuous and aggressively confrontational. Within minutes of the show starting, she is bad-mouthing “some fat mum with a massive buggy full of fat kids”.

Effie’s boyfriend, a similarly hopeless young man called Kev, is no better, and the two carry on their argumentative routines long into the night. Then one evening, to her surprise, Effie sheds her grey hoodie and meets Lee, a wounded soldier, and falls in love with him. Head over shiny-trainer heels. What happens next is a wild story that takes off and roars, screeches and powers through a dozen twists and turns until it crashes right through the barriers of our emotions to arrive at an ending which is one of the most highly charged moments I’ve ever experienced in the theatre. Yes, it really is that good.

Owen’s title alerts us to the fact that this is a story about soldiers, about war, and finally and inevitably about sacrifice. In the ancient Greek original, Iphigenia is the daughter of the Greek general Agamemnon and she is sacrificed by him so that his becalmed fleet can be freed to set sail to besiege Troy. Owen has also noted that her name means “born to strength” and “she who gives birth to strong offspring” — and his play dwells on this with enormous irony. But while Effie does make a sacrifice — in fact she makes several — her monologue ends on a note of breathtaking defiance, with one of the most moving and thrilling political declarations in recent British theatre history. Yes, it really is that good. Sorry to repeat the phrase, but I can still feel this sense of a special theatrical moment.

And yet. Although I felt the full intensity of this moment, I left the theatre troubled by the politics of the piece. For although this is a story of government cuts, and as such is angry, defiant and inspiring, isn’t there something just a bit traditional and old-fashioned about the image of a woman sacrificing herself for the common good? Isn’t this idea of women doing stuff for others as old as, well, as old as the Greeks? Similarly, it is surely a bit sad that Effie’s final gesture of political protest is an individual act, not a collective one. This is a pity since the speech reminded me for a second of Inspector Goole’s great final tirade from JB Priestley’s An Inspector Calls, with its warning of “fire and blood and anguish”. Although Priestley clearly advocates a collective consciousness, Owen focuses on one person’s clenched fists instead of showing a community coming together to make a point. It’s emotionally stunning, but politically questionable.

Still, it’s hard not to be blown away by Sophie Melville’s tremendous performance in Rachel O’Riordan’s superb production. Melville’s voice is her instrument and she snarls, she whispers, she yells, she mutters, she curls her lip in contempt. Then she starts to move, she strides, she jumps, she pirouettes, she dances, she climbs on top of a chair. She’s angry, she’s funny, she’s coy, she’s enraptured. She animates an intelligent text with one of the most intelligent and emotionally true performances you are ever likely to see.

To give her room, O’Riordan and her designer Hayley Grindle keep the stage bare except for three red seats and a cascade of neon rods which give off a sinister sizzle or an unsettling crackle. Fuelled by the powerful emotions of the writing, the show has an energy that grips you and never lets go, and at the end of some 75 minutes we are left a bit shaken by Effie’s attraction to everything that is damaged and by the rhapsody that is Owen’s final scene. Questionable politics, okay, but riveting theatre.