Home » Writings » Brief Notes Towards a Definition of Leftfield Theatre

Brief Notes Towards a Definition of Leftfield Theatre 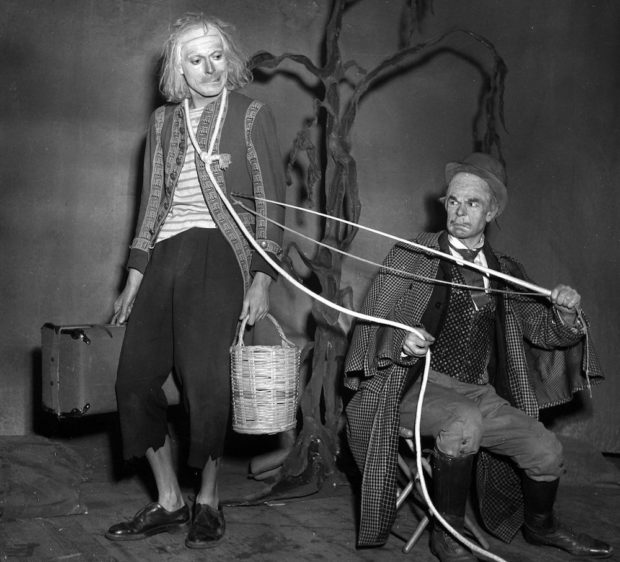 In his wide-ranging, and widely read, survey of postwar British theatre, called State of the Nation, the Guardian critic Michael Billington sets out his stall: in the introduction to the book he says that he has been motivated by the impulse “to try and discover the links between theatre and society.” For him, the canon of “modern British drama” lies in the vast arena covered by two questions: “Does theatre simply reflect society? Or does it, in any way, help to create and modify it?” Now these are good questions, but the implication is that the canon of postwar British theatre in some naïve way merely holds up a mirror to society. Here, British playwriting is praised for its ability to embody social issues, for its capacity to reflect the nation unto itself, and for its attitudes of moral inquiry and political intervention. However, all this is usually done at the cost of downgrading, ignoring or even attacking work whose characteristic is its ability to think outside the box, to actively re-imagine the world by using the elements of wild imaginings, fantasy, science-fiction, the gothic, the grotesque and overtly unrealistic writing.

This paper will focus on the more fantastical and surreal works that, to use a line from Philip Ridley’s Moonfleece, “mix fantasy up with real stuff”, and on those plays that actively distort or fracture or fragment social reality. Please note that it’s still “real stuff”, but now it has been leavened with fantasy. In calling this kind of work the leftfield, I’m conscious that I’m giving perhaps too much coherence to a whole variety of playwriting activities, but I think it’s worth trying to classify the unclassifiable. So here are some definitions: if the canon of British playwriting is conceived of as the mainstream, then the leftfield is, to use the words of the Oxford dictionary, “surprising”, “unconventional”, and “radical or experimental”. The Encarta dictionary defines leftfield as “very unusual: considered very different from mainstream attitudes or ideas and therefore not generally taken seriously” and “not typical of genre: going beyond the bounds of a genre”. If the creation of the canon is a way of making sense of the repertoire, the leftfield is everything that doesn’t make sense. If genre prepares audiences for certain predictable kinds of experience, the leftfield is unpredictable. So what I’m talking about are plays that are absurd, surreal or just plain weird. In fact, because these types of play constantly shift in relationship to the mainstream, it doesn’t much matter what you call them: what is important is their relationship to the mainstream and the role they play in pushing forward the story of postwar British theatre.

First, a thumbnail sketch of the characteristics of the leftfield.

1) Writing against (motivation). Generally, it refers to work which is written against the mainstream, which is consciously oppositional in an aesthetic sense. Such shows are usually anti-naturalistic or have an unsettled relationship with naturalism.

2) Shock of the new (reception). The new here can be defined as any innovation in the theatre process — whether it concerns writing, directing or acting or the spaces in which this happens — that surprises its first audiences.

3) Experiments in form (structure). Clearly some of the most prominent examples of this kind of writing are those which consciously oppose the forms in which popular culture tells its narratives. Questioning traditional theatre form is one of the commonest aspects of the leftfield, although it should be noted that some experiments in form are more leftfield than others. Messing around with the linear format of most straight plays immediately puts into question the whole tradition of naturalism and social realism, and it also brings the act of theatre into immediate focus — we can no longer make believe that something is just like real life, the otherness of the art of creating a play is brought to the fore.

4) Dream worlds (fantasy). Creating deliberately anti-realistic worlds which have essential differences from the world as normally experienced, preferring fantasy existences, sometimes utopias, more commonly dystopias, occasionally science fiction scenarios is a way of both offering an estrangement effect and creating an alternative world in which audiences can immerse themselves. This also underlines the fictional aspect of storytelling fictions.

5) Inner space (subjectivity). Some plays take place in rooms, some take place outside rooms and some examples of the leftfield take place inside the heads of the characters, or the playwright.

I would argue, moreover, that the leftfield is not just different to the mainstream, but is in constant tension with the mainstream. The leftfield exists to question the canon, to trouble the canon, and eventually — in some cases only — to become part of the canon. Clearly, since the war, the powerful mainstream of British playwriting is frequently replenished by the odd, the unusual, and the downright uncanny. The key play here is Samuel Beckett’s Waiting for Godot, a show which make the long journey from a French art theatre to a small London theatre club to revivals in major subsidised venues to West End popular successes with star actors.

We don’t have time to do more than sketch out some the history of the leftfield in Britain, but a few highlights do suggest themselves. N F Simpson’s A Resounding Tinkle, Ann Jellicoe’s The Sport of My Mad Mother, Harold Pinter’s The Birthday Party, Edward Bond’s Early Morning and the alternative theatre of the post-1968 era, which gave the weird and wonderful a shot in the arm, from David Halliwell’s KD Dufford Hears KD Dufford Ask KD Dufford How KD Dufford’ll Make KD Dufford (1969) to Heathcote Williams’s AC/DC. Just think of people like Snoo Wilson and the late great Ken Campbell.

One of the obvious tendencies of this kind of playwriting is that some examples almost immediately become accepted by the mainstream. There are many plays of the past 30 or so years which could be identified as leftfield lite, where some of the dramaturgy of innovative theatre surfaces in a safe and unchallenging form in mainstream drama.

Clearly the key figures in the development of the leftfield were Beckett, Pinter and Churchill, closely followed by Howard Barker and Martin Crimp and Sarah Kane. Today, plays by Philip Ridley or Anthony Neilson or Tim Crouch still have the ability to disturb, and so do moments in the work of writers such as Simon Stephens and Richard Bean. In terms of structure, debbie tucker green and Dennis Kelly spring to mind. While green’s Stoning Mary upset some critics, Kelly’s Taking Care of Baby scratched away at the whole genre of verbatim theatre. Dramas such as Laura Wade’s Breathing Corpses or Winsome Pinnock’s One Under play a dizzying game with time. In terms of fantasy worlds, Caryl Churchill’s Far Away or Drunk Enough To Say I Love You offer new ways of looking at politics; in terms of plays that take place inside the heads of the author, Martin Crimp’s Fewer Emergencies is hard to beat. Playwrights who include ghosts or spirits in their plays suggest a flirtation with the leftfield, and question the relentlessly secular bent of mainstream playwriting. Plays such as Lucy Kirkwood’s vigorously surreal Tinderbox imply that the dead hand of British naturalism can be shaken off, if only occasionally. Most recently, Mike Bartlett’s Earthquakes in London, directed by Rupert Goold, is leftfield in its overtly science-fiction ending, where the desire for a rational explanation of what’s going on is in a tense relationship with sheer fantasy.

I’d now like to wind down with a few areas of inquiry suggested by some questions:

1) What does the leftfield offer? It’s hard to give a general answer to this question because the leftfield is such a varied and shape-shifting area of theatre. But I would suggest that plays which “mix fantasy up with real stuff” are often more resonant than plays which remain rooted to earthbound plots and linear structures. The leftfield has the ability to create an impression that is at once more intense and memorable than most regular fare. Often, it is a seed from which uncertainty grows. Experiments in form question not only the mass-produced narratives familiar to us from television and the movies, but create stories that favour unexpected outcomes and unusual twists. The world of metaphors, uncanny images and weird meetings allows for more open interpretations than the rather limited linguistic and visual vocabulary of straight mainstream theatre. They also allow us to explore the landscapes of dream.

2) Why has the leftfield, in general, been undervalued? This is a complex question but I would suggest a couple of quick answers: First, there is a strong pull in British theatre culture towards naturalism and social realism. This amounts to an aesthetic ideology which exerts a hegemonic control over theatre programmers, theatre directors, theatre critics and, indeed, most theatre audiences. Work outside the mainstream, or which explicitly challenges the mainstream, is perceived as beyond the pale, as difficult or, sometimes, even as foreign. If creating a canon is about drawing boundaries, then the distinction between us and them, between understandable Brits and incomprehensible foreigners is clearly a common, if deplorable, stance. Second, when theatre practitioners deliberately define themselves against the mainstream, it is hardly surprising that the mainstream undervalues them. Likewise, most leftfield theatre is hard to assess. When work deliberately questions aesthetic norms, critical vocabulary is inevitably left behind. It sometimes takes decades to catch up. Similarly, most British playwrights feel compelled, even when they experiment with form, to write everyday dialogue. With a handful of exceptions, such as Howard Barker (and the rare oddity such as Joanna Laurens), very few writers explore the more literary ways of writing which are so common on the Continent.

3) Is this kind of work robust enough to hold out against the prevailing, and narrow, definition of the developing canon? On one level, the answer is yes. The success of recent West End revivals of plays by Beckett and Pinter is a powerful argument that the once obscure can become the reasonably clear (or is this achieved by undervaluing what remains genuinely, shocking strange about such work?). The once-absurd has, decades after Monty Python, become part of our cultural vocabulary. On the other hand, it is unlikely that, to choose a random example, The Sport of My Mad Mother will be on the Olivier stage any time soon. However, many British productions experience a certain pull towards the mainstream, where the wild weird is tamed by the naturalistic. Sarah Kane’s Blasted, a play in which the second half is a metaphor, a dream or a fable, and whose central character Ian carries on speaking despite his death, was originally produced in 1995 as if it was a bedsit drama. In this way, dream plays can become almost mundane.

I’d like to end by stressing that the leftfield is not a coherent tradition in the sense that the mainstream is. It is not, repeat not, an alternative canon. It is not a movement. It doesn’t have a manifesto. The role of the leftfield of British theatre is to be an active anomaly, to trouble the canon, to irritate expectations, and by so doing to help redefine the canon, pushing on the story of new writing throughout the postwar era. In other words, to make of history not a fixed series of events but a process, a work always in progress. If anything, the leftfield is a question mark.