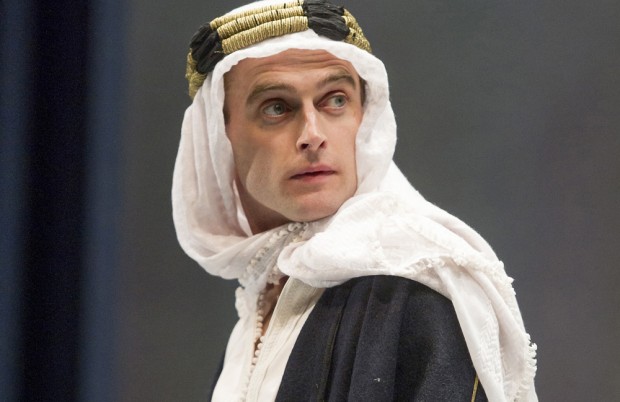 There’s something endlessly fascinating about T E Lawrence. In popular culture, he has been immortalised by Peter O’Toole’s dazzlingly blue-eyed and heroic performance in David Lean’s film, Lawrence of Arabia, but is there more to this English eccentric than freedom fighting on the side of the Arab Revolt against the Ottoman Turks? Howard Brenton certainly thinks so, and his portrait of this strange, curiously unworldly and painfully conflicted character is, like its hero, full of great potential, much of which it fails to realise.

It’s 1922—23, and Lawrence has returned from the Middle East, now a national hero and celebrity. England loves him, but he doesn’t love England. Having changed his name to Ross, he is hiding out in the house of George Bernard Shaw and his wife Charlotte, and working as an ordinary airman in the Royal Air Force. Although he has stoked the fires of his own legend, he is now ashamed of his fame as the so-called saviour of the Arabs.

In fact, Lawrence is riddled with guilt: after all, he had promised the Arab leader King Faisal and his people a free country, while knowing that the big powers — Britain and France especially – had no intention of creating a free state in the Middle East. Lawrence has betrayed his former comrades and friends, and it’s killing him. At the same time, playwright George Bernard Shaw is writing his play Saint Joan. With flashes of insight, Brenton suggests connections between this medieval warrior saint and Lawrence, showing with imaginative empathy how the privileged Englishman was struggling with his own demons as well as with his country’s Establishment.

As the story unfolds, some scenes flash back to the years of the Arab Revolt — which started one hundred years ago and whose anniversary provoked this play’s commission — and these fill out the historical narrative. The best moments centre on the quintessential conflict in English culture between the Establishment (represented by the vividly realised Field Marshall Edmund Allenby) and the oppositional bohemian artist types (the Shaws and Lawrence). There’s some charming eccentricity in the character of Blanche Patch, Shaw’s secretary, as well as the oh-so-easy-to-despise American journalist Lowell Thomas (who popularised Lawrence’s exploits). By showing how the Arabs were a “nation without borders”, who were not only betrayed by Lawrence, but also found their lands were parceled up into artificial entities, with ruler-straight borders drawn in London and Paris, there is a lot of potential for contemporary resonance in this story. The names Iraq, Syria and Damascus echo loudly in our ears.

But it is also personal. At the heart of Lawrence After Arabia is a revisionist account of the notorious episode when Lawrence was captured by the Turkish army in Daraa, then beaten and raped. But is this exactly what happened? And, if not, how was Lawrence acting out his own masochism and guilt when he told, and retold, this incident? But such interesting moments are rare in this rather undercooked drama, which feels more like a tantalizing mirage than a nourishing oasis. Politically, the play is lacking in debate, and there is no discussion of the Muslim religion or culture. Nor of the sense of entitlement that allows public-schoolboys to go to foreign countries and assume leadership of their destiny, which usually results in tragic partitions. In fact, I think that Brenton’s Drawing the Line, his other play about artificial borders, is a fuller and more satisfying account. Speaking of partitions, the conflict between Ireland (Shaw) and England (Allenby) is likewise only hinted at. A lot of the possibilities for contemporary resonance die in the desert air.

John Dove’s production is also a bit lackluster, with designer Michael Taylor’s stage picture and the cast’s acting never really catching fire. As Lawrence, Jack Laskey is lacking in both charisma and depth of feeling, although Geraldine James’s Charlotte and Jeff Rawle’s Shaw are better. Best of all is William Chubb’s straitlaced Allenby, closely followed by Rosalind March’s quietly comic Blanche. So while the evening has its fair share of insights, and humorous and delightful moments, the play feels a bit underwritten and the overall effect is one of mild disappointment.