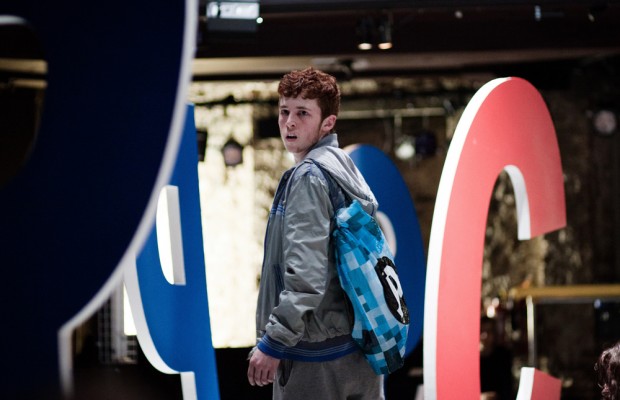 How do you stage acute loneliness? Once solution is offered by Alistair McDowall’s X, where the mental stress of a sense of total isolation is conveyed by setting the play in a space station far from Earth; another is created by Leo Butler’s Boy, which communicates the idea of abandonment and futility by placing his main character, a 17-year-old boy called Liam, right in the middle of an alienated — and alienating — urban cityscape: London. Just as opium-eater Thomas De Quincey called Oxford Street a “stony-hearted step-mother” at the start of the 19th century so Butler shows the effects of an equally unyielding metropolis two hundred years later.

Liam is a young lad in a grey tracksuit and he’s lost in the city. Not only literally, but also in terms of his life chances: he’s just left school, and he’s not in education, employment or training. The government might classify him as a NEET. And the tabloids might see him as “feral”. But Butler wants to go beyond such simple labelling and show us the person behind the hoodie. Liam appears to be a loping, lanky guy, who chats in the language of youth culture, and who doesn’t care about anything much — but the fact is that society doesn’t care about him either.

This theatre piece follows Liam for about a day and a half, starting with a visit to his GP, who tests him for an STI, unaware that that’s not what’s on his mind, and then Liam travels through streets, resting at a bus stop, to a council estate and a shopping centre, hanging around a park (where he tries to have solo sex), and then going uptown. As he lopes along, he crosses paths with all and sundry: schoolgirls chatting while eating fried chicken, a teenager dealing drugs, a mother blocking his access to an old school friend, commuters glued to their phones, other travellers, foreign construction workers, a toilet attendant, a blonde neighbour, various claimants at a job centre, and homeless people.

What strikes you most strongly in this impressionistic panorama is Miriam Buether’s design, an airport-style carousel that snakes around the theatre, helping the actors create a sense of constant movement in a restless cityscape. This also provides a strong visual metaphor of urban life as a huge machine, which crushes up the weak and is ridden by the strong. And Liam is one of the weak. It also suggests that human beings are only so much baggage. In order to survive, Liam imitates the people he meets, trying, and usually failing, to say the right thing, before tailing off into inarticulacy. Unfortunately, Butler hasn’t given him any real inner life, so our sympathies for him are muted since we don’t really know what he’s thinking, or imagining.

Butler indicts the Welfare State by showing that its chief functionaries are simply too ill-equipped to handle youngsters like Liam, who by now is fast becoming a symbol of our uncaring society. The age of austerity might be good for people who watch their house prices rising through the roof, but it does no favours to people like Liam, who have nothing to do and few prospects. He’s the quintessential guy you pass by in the street. He’s got no credit card, no oyster credit, no phone credit, no cash and little hope. He’s a loser, except that this play implicitly argues that we are the losers to think of him like that.

Frankie Fox plays Liam with admirable restraint, drifting from one hopeless encounter to another, arguing with his younger half-sister, being hassled by a cop on the tube or barred from a shop, and eating the food left over by other people. In Sacha Wares’ production, the other 25 or so cast members — who like London itself are an illustration of a wonderful range of cultural and racial diversity — play several roles each, creating a kaleidoscope of city life.

The trouble is that the novelty of the 70-minute show wears off after about 20 minutes and the deliberately impressionistic scenes are hard to follow — dialogues are deliberately muffled by ambient music and general stage busy-ness. This means that the story, such as it is, gets a bit lost in the hurly-burly. Once the excitement of the staging wears off, and you can soon tire of seeing all the cast doing the “invisible chair effect”, the thinness of the play begins to annoy, and isn’t there something a bit patronising about a middle-class theatre lecturing us about being uncaring? Surely, they don’t really think that we are unaware of all the Liams who have nowhere to go in the cold rain of London town? The play presents a vivid picture of reality, but fails to dramatise it. I think the evening lacks drama, lacks characterisation and finally, and paradoxically, itself lacks compassion.