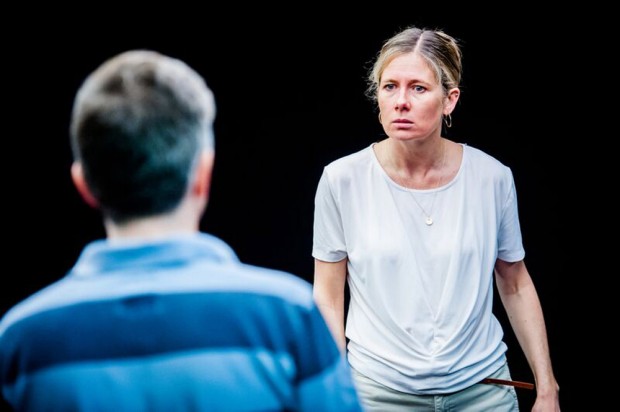 How well do parents know their kids? Especially their teenage kids. Jack appears to be a nice, well-spoken 17-year-old youngster about to take his exams. You see, he has ambitions to study law at Durham University. His parents, David and Di, think he’s a normal boy and they are really proud of all of his hard work. And of his good grades. But, in James Fritz’s compelling 90-minute play, they are about to be disillusioned. And the trick is that we never get to see Jack: he remains offstage, so all we are left with is the reactions of his parents and friends.

Let’s start with the parents. One day, Di spots David holding one of Jack’s shirts. It’s got blood on it, but her husband tries to tell her that it’s nothing, just a nosebleed. That’s funny, she never knew Jack had nose bleeds. Is David telling the truth? Of course not, and soon the facts tumble out. Jack has been dumped by his girlfriend Cara, who is upset with him. In revenge he has posted a short video (the length of which makes up the drama’s title) of them having sex onto an internet porn website. Or has he? Maybe it was his mate Nick who did it. Either way, Cara’s vicious father and her brother are out to get Jack — and they have already given him a thumping.

Di is appalled. Although both parents defend their boy, they need to get to the bottom of what’s been happening, and with an almost mesmerising intensity the whole family begins a downward spiral into darkness. Both Di and David face a real problem: if Cara’s family is menacing their son, maybe they should inform the police. But when David tells his wife that the video seems to imply that Jack forced himself on Cara, they run into their first (of many) ethical problems: if he raped her, they don’t want to involve the authorities. But did he, or was it just a game, and what is truth, and what is consent? David is relaxed about his manly son’s behaviour; Di isn’t.

Both parents are from a working-class background, and they know Cara’s family from when they were all at the local West Croydon school together, but now that Jack has the brains and the aspirations to move up the social scale, they want to protect their investment in him. Besides, these internet things stay on the web forever, don’t they? But while the older generation talks about the internet, what about the other teens? What do they think?  Di first questions Jack’s mate Nick, then finally meets Cara — and Cara has another story which tips the balance of the whole situation.

Fritz’s writing is fast and dymanic, and his story is both a thriller and a powerful contemporary social document. Having mastered the art of coming late into any scene and leaving early, he pulls the audience through the story at a cracking pace. Shocks come thick and quick, and our expectations do somersaults as more and more information is revealed. At the same time, there is enough space for the bigger issues about the role of image in our society, of peer pressure, of consent before sex, of generational differences, to appear, however fleetingly.

But the main focus is on relationships. Men, perhaps unsurprisingly, don’t come out of this very well. Not only are they pretty sexist, but also they all — with the exception of Nick — do some really stupid things. Yet, just as you are beginning to think that Fritz is a pro-feminist, he shows you Di in a very unflattering light. By the end, the marriage of David and Di seems to have been built on, or sustained by, lies. Chronic secrecy surrounds the use of the web by both David and his son; meanwhile, the youngsters live in a world where sexualised images are freely passed around, and evade the delete button at every turn. The results are potentially devastating for all involved.

Yet as well as being a cautionary tale, this is also a brutally frank account of difficult emotions. Issues of ethical behaviour, moral choice and social justice weave in and out of the belting text. If the conclusion that parents will do anything for their son is unsurprising, the hoops they have to jump through in this story certainly are. But the time the last words — “He did really well” — are uttered, they sound like the saddest judgment of the whole story. The notion that Jack is a “good kid” and that his parents are “good people” gets a thorough mugging. And we find out the answer to the question of whether he has made a “stupid mistake” or committed a serious crime soon enough.

This West End transfer from Hampstead Theatre, the first of a couple this autumn, is directed with enormous empathy and skill by Anna Ledwich on Janet Bird’s virtually propless set, whose only decoration is a buzzy pattern vaguely suggestive of the internet. Both Kate Maravan and Jonathan McGuinness deliver detailed, controlled and thoroughly convincing performances as the parents, and both make an appreciable journey during the course of the play. Ria Zmitrowicz and Anyebe Godwin provide good support as the feisty Cara and the caring Nick. All contribute to a really fine play that is thought-provoking as well as viscerally exciting.