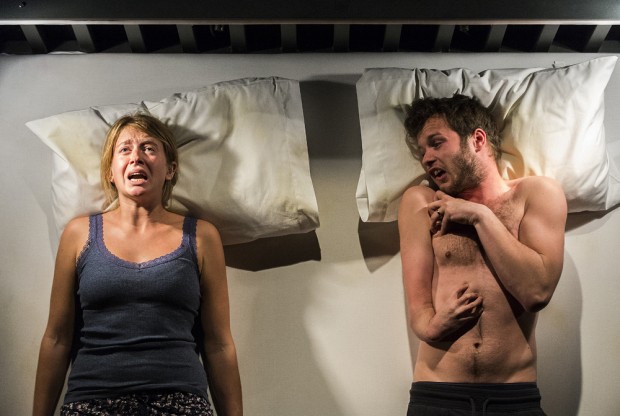 Hurray, the two-part epic wizard-fest Harry Potter and the Cursed Child lands in the West End this summer, and all hail its ever-versatile playwright Jack Thorne (who also successfully adapted the vampire romance Let the Right One In for the stage). But audiences who’d like to enjoy Thorne at his thorniest, rather than most Rowlingesque, might prefer to take a look at this, his 2015 two-hander about a couple and their loss of a child. It’s a Hogwarts-free zone and its main emotional fuel is horrific pain coupled with courageous honesty. Strictly for adults only.

Like any romcom, the story of Phil and Alice begins with a quirky meeting, then stumbles through some hiccups around dating, before finally getting down and dirty with sex and marriage and pregnancy. It’s a play that exalts in its own physicality, in love juices and leakages, a play about sperm and blood and placenta. Anyway, Phil is a 31-year-old Englishman who comes across as “harmless”, a bit clumsy, a bit awkward, with an offhand charm that would be improved if he didn’t say “sorry” quite so often. Alice is slightly younger, but more confident, quite forthright and quite a knowing sort of woman. When she gives him a questioning look, there’s a sparkle in her eye. Oh, and she’s deaf, and he — in this production — has a physical disability in his right arm.

After some three years of marriage, Phil and Alice try for a baby. She soon gets pregnant and then loses her child after an antepartum haemorrhage. Yes, it’s as bad as that sounds. Unimaginably bad. Thorne tells this tragic story with enormous control, intercutting the awful events — and they really are dreadful — of the baby’s loss with lighter material about the couple’s relationship, told with an unforgettable mixture of sexual and emotional explicitness and unflinching honesty. The result is an experience that not only punches you in the guts, but also pauses to stroke your hair and dab your tears with a tissue. (At one point, when Phil and Alice first kiss, I swear I could feel my eyes filling up with tears.)

What makes this saddest of sad tales watchable and compelling is Thorne’s writing. He uses constant repetition and reiteration to create an almost incantatory effect that suggests a joy in language as well as a desire to communicate the uncommunicable. The descriptions of sex are breathtakingly explicit and full of intensely observed detail. By immediately pulling us into the zone of the acutest discomfort, Thorne opens a direct route to our hearts, making the tragic end of Alice’s pregnancy one of the most heartbreaking passages on the contemporary British stage. The predictably mute incomprehension of both characters in the face of awfulness is terribly moving.

A whole series of plays about harrowing situations has arrived in London recently and, like them, The Solid Life of Sugar Water originates outside the metropolis. A co-production between the Theatre Royal Plymouth and Graeae — a company that specialises in giving opportunities to disabled people — the play wowed audiences in Edinburgh last year, and it certainly wows me now. In Amit Sharma’s perfectly judged production, which brings out the humour as well as the heartbreak, Genevieve Barr (who is deaf) and Arthur Hughes turn in a pair of beautifully matched performances which are, by turns, courageous, funny, delicate, compassionate and quietly inspiring.

If I left the theatre wanting to know a bit more about what happened next to Phil and Alice, the time spent with them was enhanced by designer Lily Arnold’s upright bed with its frame of mood-changing coloured lighting. Although in the story there are very few details about their lives apart from their sex lives, there are a couple of especially memorable moments, one a joke about Tracey Emin’s Bed and the other a riff on Dire Straits’s “Romeo and Juliet”, that sugar the more bitter pills of the evening. And the acute humour of the gender politics sits nicely alongside the physicality of the piece. In the end, it is the awareness that the characters have about their own plight added to the production’s ability to mix the gross and the uplifting that makes this depiction of trauma both vivid and invincible. It’s a brilliant piece of theatre, full of deep feeling and a profound sense of how humans survive disaster.