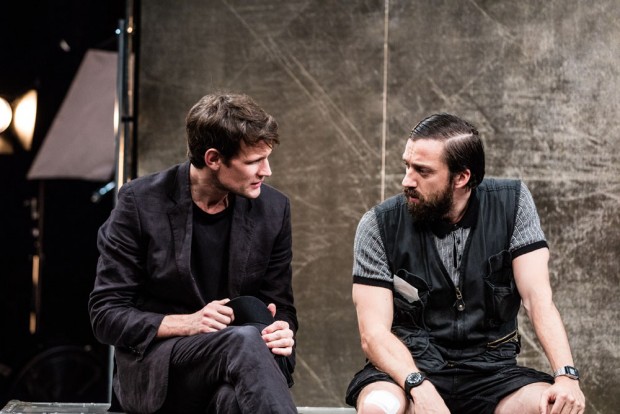 There’s a moment near the end of the first half of Anthony Neilson’s new play, Unreachable, when I started laughing so much that I thought I might have finally really lost it. This feeling had crept up on me very slowly and subtly so that I was both surprised and a bit baffled. It was one of those moments when the emotion behind the laughter was almost inexpressible, almost unreachable in fact, an odd mix of hilarity and shock, or maybe fun and a weird kind of fury, a sudden urge to self-destruct. Afterwards, this sense of a self, my self, on the edge of chaos felt exactly right for a play that plays with both humour and with the ineffable.

Devised with the cast in rehearsal by Neilson, who also directs, the story centres on Maxim, a perfectionist and self-destructive film director, who — having won the Palme D’Or at Cannes — is now shooting Child of Ashes, a dystopian drama that involves survivors struggling to make a living in a post-apocalyptic world. From the start of the play, Maxim seems to be intent on sabotaging his own movie. To the horror of Carl, his chief cameraman, and Anastasia, his producer, he switches from digital to film, sneers repeatedly at Eva, the deaf finance supervisor, bullies Natasha, the star actor, before finally employing Ivan, another actor, and one who resembles a human catastrophe. With him on board, the film is bound to flounder.

Why is Maxim undermining his own project? The biographical details of his character, abandoned by his parents at an early age, offer an easily dismissible reason which doesn’t carry much conviction, so the roots of his perfectionist psychology are obscure. But, as portrayed by the ever-watchable Matt Smith, whose ex-Doctor Who star appeal and mildly earnest openness is one of the evening’s main draws, Maxim is a rather gentle fanatic who has quietly sacrificed everything in life in pursuit of his artistic vision, in this case his desire to capture a certain quality of light, the kind that “suddenly hits you with a wave of emotion”.

For me, the main problem with Unreachable is that there are at least three plays crammed into one show. One is a frankly vulgar comedy of manners in which film folk are satirised and sexual jokes (about female ejaculation, coprophilic copulation and other bodily juice smirks) bonk around the bare set. Another play is Maxim’s (Terrence Malick-style) search to express the inexpressible, to create a work of art that feels like a homecoming, a complete summation of life. While this is nicely presented with a blend of ironic pretentiousness and genuine seeking after art, the serious side of the evening is sabotaged (Maxim-fashion) by the comedy, which — when the Balkan Ivan (a larger-than-life Klaus Kinski-type character) arrives — turns into the third play, a hilarious farce.

Known as the Brute, Ivan has in Jonjo O’Neill’s hands a huge stage presence which dominates the second half of the play. The verbal element of the show suddenly takes off, with a delicious baroque language which enlivens what was previously a very linguistically conservative play. The Brute’s “I have walked a thousand miles to save a fly” speech or his caustic putdowns, all fantastically elaborate, both bring the story to life and partially unbalance the whole evening. Vaguely reminiscent of Richard Bean’s most eccentric characters, Ivan is the star scene-stealer of the show.

For the rest, Unreachable presents a picture of the creative world that is a place of extreme cruelty, savage humiliations and sexually charged encounters. There are taboo-busting jokes about disability, deftly performed by deaf actor Genevieve Barr (Eva), an amusing sex scene between Carl and Anastasia, and a lovely seductive episode between the Beast and Eva. Because the play was created from scratch in rehearsal, and is constantly amended during the course of its run, there was a moment of delightful corpsing in this seduction scene. But these nice touches cannot dispel the fact that the film industry is here depicted as a place where overwrought and selfish people get hurt, and creativity is only achieved at enormous human cost. At the same time, Neilson is clever enough to satirise the excesses of pretension, as when Maxim insists that Natasha excavates her deep “personal buried pain” in her performance, while she hits back: “I’m an actress — if you want me to feel something, then you have to fucking pay me.” On the night I saw the show, this line brought the entire house down.

The artistic compromises and air of cynicism are well conveyed by Neilson’s cast, with Amanda Drew’s Anastasia, Richard Pyros’s Carl and Tamara Lawrence’s Natasha particularly engaging, but these careful performances tend to be overwhelmed by the mega-battle between Smith and O’Neill. Chloe Lamford’s empty set, with its light screens and metallic equipment boxes, allows plenty of room for the farcical physical comedy, but the play remains oddly un-contemporary, while the coup de theatre at the end suffers if you compare it with either Mike Bartlett’s Wild or the effects in Jennifer Haley’s The Nether. Unreachable is not as revelatory, nor as satisfying, as Tim Crouch’s Adler & Gibb, which says a lot more about both theatre and creativity, but it is very, very funny. It’s a comic masterpiece — that is both its triumph and its chief flaw.