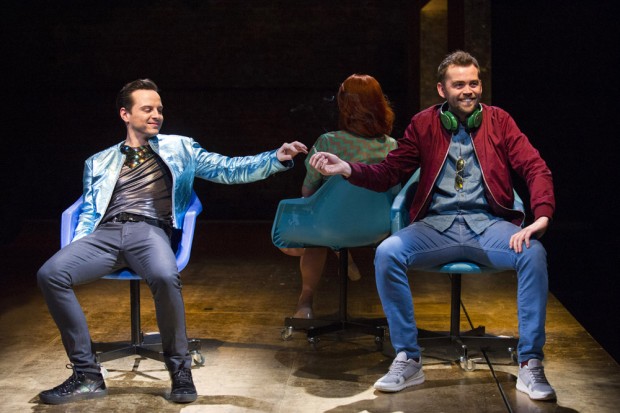 What kind of year was 2014 for new writing? The theatregoer looks back at twelve months of British theatre and searches his mind for a different way of writing about what happened. What he needs is something a tiny bit more colourful than the usual rather bloodless litany of new plays. Something more personal perhaps. The penny drops. What he needs is a gimmick. He is, after all, a journalist. So he steps cautiously, very cautiously, into a fictional persona. He invents the Critic.

Clearly, this persona is more decisive than his real self. For the Critic, there are only three key evenings of the entire year: the first is the opening night of Simon Stephens’s Birdland at the Royal Court. It is April; rain pelting down. Which suits the Critic’s mood. He thinks the play, which is a portrait of a rock star (played by the charismatic Andrew Scott), fails utterly to convey the wicked wildness of rock. It lacks drama. It lacks vitality. It lacks life. The ideas that lightly litter the text like a sprinkling of stale confetti are too thin to cover its blemishes. Although not all of the writing is bad — there’s a strikingly chilly passage about what it feels like to be dead — what’s really missing is a powerful metaphor. After all, Patti Smith’s ‘Birdland’ (1975), which Stephens uses for his title, gasps and oozes and screams with imagery: the belly of a ship, the white opal eyes, the helium raven. But such images are missing from Stephens’s text (although his previous work abounds in them). What makes this a key evening is not the writing, but the production, by Carrie Cracknell. Throwing the naturalistic bible out of the rock star’s fifteenth-floor hotel-suite window, her staging brims with visuals. Vividly coloured plastic chairs, actors who play different roles but never change their day-glo costumes, and final scenes that blossom like a kind of evil bloom as a vile liquid seeps onto the stage, a sensation of deathliness. For once, new writing gets a thrillingly imaginative production. Farewell naturalism; hello director’s theatre. Bye, bye Little England; come in Continental Europe.

The second key evening is Tim Crouch’s Adler & Gibb, which tells the story of a fictional artist, Janet Adler, and her lover Margaret Gibb. The play opens with a student giving an academic presentation on the work of this radical anti-artist, who destroys her own work and eats a critic’s painting, and then follows Sam and Louise, a director and actor, who plan to film the abandoned house where the reclusive women used to live. Both are surprised to discover that Gibb is still alive. Crouch’s main theme is the relationship between art and reality, and he joyfully satirises academic descriptions of artistic creativity, while commenting on how film-makers, art critics and biographers vampirise the lives of artists. But he also, and typically, explores the nature of theatre, and theatrical representation. On stage there are two kids who play a variety of roles — from a deer to a dog to a corpse — but never in a literal or representational way. In this play, there are many objects on stage, but they rarely stand for what they are in the story: a bit like conceptual art. At various moments, Louise becomes Adler, wearing the dead woman’s clothes, imitating her accent. Likewise, the actor playing Sam has a Scottish accent, although he is meant to be an American. In the second half of a short evening the story takes a couple of disconcerting leaps, and things turn very ugly as the unpleasant ambitions of Louise take centre stage. At the end, as Sam’s film is screened, the Critic is a bit disappointed in its rather literal inconsequentiality.

The third evening is Mike Bartlett’s King Charles III, which transfers from the Almeida to the West End. This thoroughly engrossing play explores a futuristic scenario in which Prince Charles (Tim Pigott-Smith at his posh best) becomes king and immediately plunges the monarchy into a constitutional crisis. Asked to sign off a parliamentary bill that curtails the freedom of the press, Charles succumbs to a crisis of conscience and refuses. This provokes parliament to pass it without his formal ascent, and Charles III — in an echo of Charles I — dissolves parliament. With the country split between his supporters and his opponents, civil war is threatened. As events unfold, Bartlett shows how the younger generation of royals — namely William and Kate — could play their part. He also develops a subplot in which Prince Harry strikes up a relationship with Jess, a squatter art student, who is a republican and an activist. When riots break out, and the ghost of Princess Diana haunts Buckingham Palace, all of the characters have to choose sides. Both a speculative political piece and a highly entertaining evening in the theatre, the play is written in blank verse, with deliberate Shakespearean echoes (the Critic ticks off references to Henry IV, Richard II, Macbeth and King Lear). Sometimes, the effect is dizzying; at other times, the verse provokes unexpected laughter. Like a renaissance history play, this is a family conflict as well as a matter of state, and Bartlett nimbly scrutinises the minds of his protagonists. Clearly, it is best not to subject the central premise to too much scrutiny. The play is more about poetic truth than literal fact, and not only is it fired by a wonderfully original idea, it is also entertainingly realized in a superb production by Almeida supremo Rupert Goold.

Apart from these three plays, most other examples of new writing are, thinks the Critic, not worth discussing. The most significant trend of the year, the Critic believes, is soft socialism. More and more theatres put on plays where the radical gesture is more important than any radical content. It’s as if they want to proclaim their oppositional credentials without the effort involved in actually taking on the forces of power. And middle-class audiences are hugely entertained by seeing middle-class people doing radical things, clearly an easy way of changing the world. Examples of this woeful trend are Nick Payne’s devised show Blurred Lines (National), which offers easy feminism, James Graham’s Privacy (Donmar), which offers easy criticism of the misuse of digital personal information, Alecky Blythe’s Little Revolution (Almeida), which offers easy participation in the summer riots of 2011, Tim Price’s Teh Internet Is Serious Business (Royal Court), which offers easy applause of hacktivism, and Duncan Macmillan and Chris Rapley’s 2071 (Royal Court), which offers easy green politics. The missing ingredient is a real sense of anger.

Added to this dismal fare, the Critic thinks that the Royal Court has lost its way under its new artistic director, Vicky Featherstone. Although the venue is meant to be a new writing theatre, it has had more success with adaptations of books — the Scandinavian Let the Right One In and the American The Mistress Contract — than with innovative new writing. Much of the place’s energy tends to be absorbed in small projects for coterie audiences, rather than in developing full-length plays. Luckily, there are a couple of exceptions: Rory Mullarkey’s richly surreal and imaginative The Wolf from the Door and Molly Davies’s satire on primary education, God Bless the Child, prove that there are some original young British talents out there (although these were confined to the studio space so as not to infect too many members of the public).

Other examples of a more diffuse soft socialism, says the Critic, regrettably relapsing into list-mode, include plays about the National Health Service, such Stella Feehily’s agitprop This May Hurt a Bit (Out of Joint) and a revival of Nina Raine’s Tiger Country (Hampstead), as well as plays about the police, such as Roy Williams’s Wildefire and Atiha Sen Gupta’s State Red (both also Hampstead). The 1980s are the favourite destination for plays that time travel: and miners, and the miners’ strike of 1984, are, as Matthew Warchus’s film Pride exemplifies, the main focus of historical attention: onstage there are plenty of miners in Chris Urch’s Land of Our Fathers (Theatre 503), Beth Steel’s Wonderland (Hampstead) and, featuring also a miner’s sister, Bryony Lavery’s Queen Coal (Sheffield). All this is rather parochial so it’s a relief to report that David Edgar’s loose Iron Curtain trilogy — The Shape of the Table, Pentecost and The Prisoner’s Dilemma (Cockpit) — has been successfully revived on the twenty-fifth anniversary of the Fall of the Berlin Wall by the American Burning Coal Company.

Elsewhere, the big new writing West End transfers include Moira Buffini’s Handbagged (Tricycle), about Thatcher and, once again, the 1980s, and Richard Bean’s Great Britain (National), an overlong and unfunny account of British tabloid journalism, Rupert Murdoch and the phone-hacking scandal. In the year of the Scottish Referendum, Rona Munro’s The James Plays trilogy, a co-production between the national theatres of Britain and Scotland, take a glance at the present through the lens of history. On a cuddly note, thinks the Critic, his heart momentarily glowing, the adaptation of the year must be Lee Hall’s version of the 1998 film Shakespeare in Love, an entertaining delight whose main star is a lovable dog.

As family dramas take the place of “me and my mates” plays, the examples of the year are Polly Stenham’s ferocious Hotel (National) and Gurpreet Kaur Bhatti’s charming Khandan (Birmingham). As usual, there are plenty of small plays, with small casts and small imaginations, occasionally written by actors rather than playwrights, many of which are perfectly lovely but soon forgotten. And of course there are, mutters the Critic, plenty of excellent new plays set in America, in Ireland and in the past, but where are the urgent British plays that explore the present? Whatever happened to anger? Maybe next year will provide an answer.