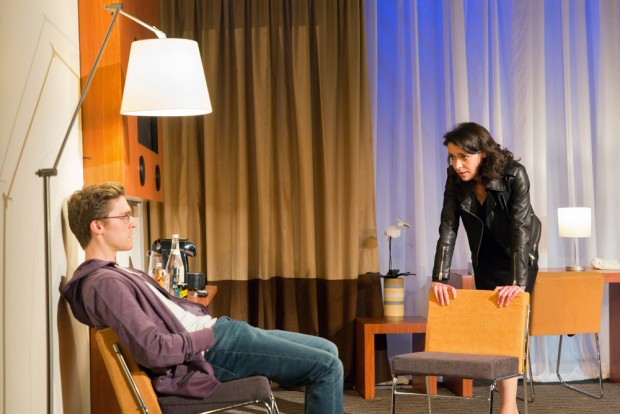 Edward Snowden is easier to respect than to like. In 2013, the American computer specialist and former CIA employee copied and leaked more than 150,000 classified documents which revealed American military and diplomatic secrets, especially about global surveillance systems. Having been responsible for one of the biggest acts of whistleblowing in history, he was now the most wanted man on the planet, and his whole life changed dramatically. After giving interviews to the media in Hong Kong, he evaded American attempts to extradite him by fleeing to Moscow, for a while being holed up in a hotel room, which is where Mike Bartlett’s new play, Wild, is set.

Like Snowden, Bartlett’s Andrew is an uptight, slightly geeky and rather unprepossessing individual. In his hotel room he is being visited by a young leather-jacketed woman who claims to be called George Prism — an amusing reference to Oscar Wilde’s The Importance of Being Earnest (“George was the name of the first actor to play the part”) — and who he thinks, with typical naivety, has been sent by WikiLeaks founder Julian Assange. Their talk begins awkwardly because while she is very jokey and very flippant, he is very serious and very scared.

The premise is not altogether convincing. Bartlett never really tells us exactly what deal Assange might be able to arrange, nor why his Andrew should believe that he is in any position to make any kind of deal. As Prism points out, “You have no freedom, no choice, at the moment you don’t even have a passport.” And she contradicts Andrew’s simple-minded idea that he has human rights which will be respected by those in power. Clearly, we can see early on that Prism doesn’t represent the good guys, whoever they are, but is a secret service operative of some kind. This is confirmed when, after she leaves, a man knocks on the hotel room door.

He is also called George, and his manner makes a nice contrast to Prism’s. He is serious, intense and menacing, and clearly not a representative of the WikiLeaks founder. Both of these scenes, and a repeat visit by Prism, underline Andrew’s plight. He’s 28 years old and he has already done the only thing that he will ever be remembered for. If he can avoid being killed by the CIA, he can never have a normal life, meet normal people, have normal relationships. He has effectively blown up his entire existence — and done it voluntarily. From now on, he’s alone. And, Bartlett points out, he misses his previous life. It’s a touching point.

Wild sketches out the politics of whistleblowing, and its human costs. There are eloquent passages about the surveillance society and the way that power, of whatever country or corporation, negatively affects our lives. We are, say the characters, not free, even in the land of the free. In the digital age, privacy is a dinosaur concept. While none of this is new, it is stated with an engaging simplicity and directness. More problematic is the fact that this is a play about one man who is stuck in a room, and whose visitors keep making the same points. However Pinteresque the air of menace, there is precious little drama here. Andrew has no choice but to accept what his visitors say, and he does accept what they say. He has no choice. And we know this from the very start.

While the 100-minute play is short on drama, James Macdonald’s production is good on character and pace. The good-natured Andrew is played with sincerity and integrity by Jack Farthing, and his quiet struggle to maintain his identity as a human-rights activist, as well as his rather deflated quality of priggish superiority, is contrasted well with Caoilfhionn Dunne’s Prism, who is scatty and rapidly switches from jokiness to seductiveness to cleverness to boasting about her Cambridge university education. As the male George, John Mackay is equally good, being both sullen and threatening. Their good cop/bad cop routine is a pleasure to watch.

In contrast to the inherent interest of the play’s smooth dialogues about progress and history, there’s a slightly cynical air to the story, which suggests that all resistance to power is useless. Power is absolute and only total anonymity can protect us. Really? Otherwise, the main effect of Bartlett’s playwriting is the creation of an atmosphere of metaphysical uncertainty, which builds up and bursts out in the last 10 minutes in a vertiginous ending — designer Miriam Buether’s great coup de theatre. A play called Wild finally delivers on its title and communicates, beyond words, the idea of a world spinning out of control. This is a brilliantly eye-opening scene, but I still couldn’t help thinking that it was a visual solution to an intellectual stalemate. I just hope it doesn’t catch on — other playwrights might be tempted to solve a plot impasse by reaching for a visually extravagant metaphor. And that could get very boring.