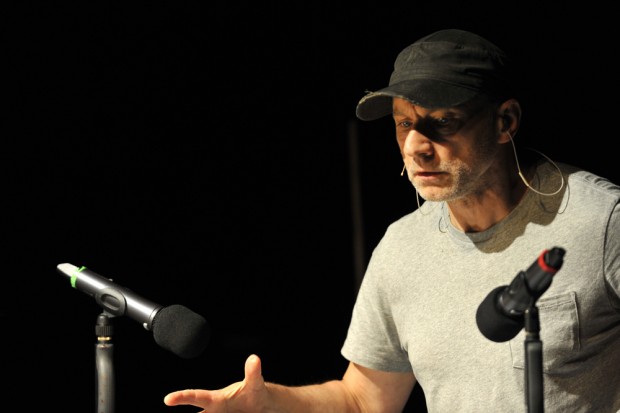 Actor and director Simon McBurney’s one-man show has arrived in London after gathering plaudits in Edinburgh and elsewhere last year — before setting off again on a nationwide and European tour. It’s the story of a much more adventurous journey, which took place in 1969 when Loren McIntyre, a photographer for National Geographic magazine, got lost in the Amazonian rainforest while seeking the Mayoruna tribe, the “cat people”. Although he made contact with them, he found himself suddenly and completely dependent on their good will.

It’s a situation that immediately suggests the question: what would you do in a similar plight? McBurney uses contemporary technology (basically, headphones for every audience member) not only to tell this story, but also to convey his own ideas about perception and communication right into the space between our ears. Inspired by Petru Popescu’s book Amazon Beaming, which is based on McIntyre’s experiences, the show transports us deep into the jungle to experience what happens to McIntyre as he realises that the Mayoruna people are almost as lost as he is.

It’s a brilliant piece of theatre: McIntyre cannot communicate because he shares no language with the native peoples, and McBurney allows us to feel something similar by using headphones that cut one member of the audience off from another. Instead of sharing the theatre space, we are each atomised individuals, trapped within our own perceptions, cut off from the rest of humanity. At first, this annoyed me: what a gimmick, I thought. And when McBurney starts the show by chatting informally to the audience, making jokes about latecomers and about mobile phones, I remembered that he had done the same in his 1999 show, Mnemonic. How repetitive, I thought.

But then his retelling of McIntyre’s journey into the Brazilian forest begins to weave its seductive charm. Interspersed with comments about time, language and perception from interviews with boffins such as Marcus du Sautoy and Steven Rose — as well as contributions from McBurney’s five-year-old daughter — the story takes off like an epic adventure, with treks and betrayals and anthropological rituals. At one point, McIntyre jogs around the tribe’s village in a hexing match; at another, there is a jaguar hunt that ends up in a thorn bush. All along the way, there are many beautiful and enthralling moments: a mosquito buzzes convincingly around our heads, McBurney snips some hair next to our ear, he takes a swig from a water bottle and then uses it to represent a river. A pile of scrunched-up audio tape is used to create the sound of jungle leaves. Various other simple sound effects find our eardrums.

At the climax of the two-hour play is a tribal event which gripped me in a very unusual way. Suddenly I found myself in another time and place: not in the Barbican; not on this Tuesday night. Out of my head. Not really there. Completely zoned out. Like some odd hallucinatory drug, it was trippy, like being very stoned. Or rather spaced. And then I realised that this powerful sense of not-ness was my very own poor equivalent to the spirit of McIntyre’s amazing story. I was feeling the tale. It reminded me most of when I was a hippy, when we used talk about Claude Lévi-Strauss and Carlos Castaneda, so I was time-travelling in parallel with the show.

What converted me from scepticism to a wholehearted embrace of this theatrical experience was McBurney’s persuasive and passionate intelligence. He’s an enthusiast for ideas and for storytelling, with an energetic interest in what makes human beings tick. He strides across the stage, he uses different mikes, he spins the yarn in all its high-tech and low-tech glory. He clearly loves this story, so it’s easy to love him. And for The Encounter, he gets some wonderful assistance from co-director Kirsty Housley, and sound designers Gareth Fry and Pete Malkin, not to forget sound operators Helen Skiera and Ella Wahlström.

And when McBurney shows how we can sometimes communicate without the use of ordinary language; how we can “beam”, a kind of soundless telepathy between humans who share no language, I was ready to love the idea in all its manifestations. Amazon beaming indeed. Believe. Yes, this is a marvellously luminous and engaging show that teaches us, entertains us and finally transports us.