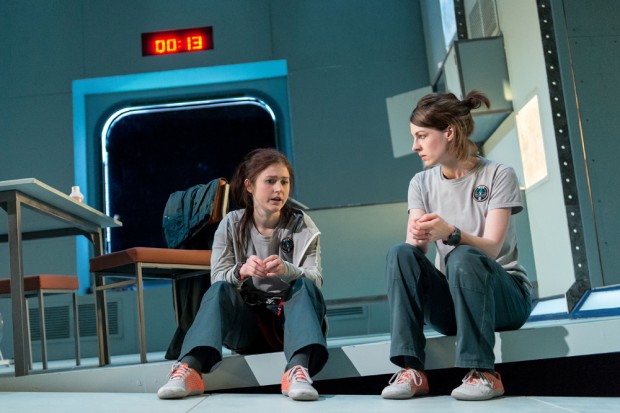 Somewhere in space a middle-aged man is crying. Crying. Dying. It’s a sad sight, but then Alistair McDowall’s X is in the end a pretty sad play, although I was determined to like it simply because it is set on a lonely research station on Pluto, and I love the idea of a science-fiction scenario as a metaphor for the human condition. Although McDowall is one of the most exciting and original voices in today’s new writing, it’s not a perfect play, but it is a very intriguing one, with its echoes of modern classics and its strong flavour of the contemporary.

Act One is a non-linear account of what happens to the Captain and crew of the British research station when they lose contact with Earth. As in the David Bowie song “Five Years”, the home planet is dying, with trees and birds becoming extinct, and whole countries disappearing. Ecological disaster has engulfed the world. Does the loss of contact between our astronauts and scientists and the home planet mean that the human race has died out, or is there something wrong with the station’s equipment? Will the Earth base send help to Pluto, an enterprise which represents an massive investment, or has it abandoned them to their fate?

Waiting for help to arrive is the Captain, Ray, a pill-popping ornithologist who tries to keep alive his memory of bird song; Gilda, his febrile second-in-command, whose science is astro-geology; Clark, an uncooperative Scottish commuter scientist responsible for communications; and Cole, a meteorologist and mathematician. Oh, and then there’s Mattie, an ambiguous presence on this freakish space station. As time passes, the crew begin to experience cabin fever, and strange things happen. In Act Two, the beautiful weirdness resembles a cross between 2001: A Space Odyssey and a rogue episode from the Red Dwarf  franchise. There might even be more than a touch of Solaris in there too. Above all, it brings the idea of sci-fi horror centre stage: a bloody X appears on a black window; there’s a hallucination of a child with an X scar for a mouth.

And then there’s the disorientation. Firstly, time — which is meant to be synchronised with Earth time — starts to become malleable as the clocks begin to go wrong, and days stretch and flip into endless nights. As shadows gather, the play’s big themes come in from the infinite cold of outer space: solitude, loneliness and isolation; then trust and distrust among the crew members; communication and non-communication; then breakdown, despair and suicide. Time starts to eat into the memories of the characters, as they tell each other’s stories, repeat each other’s words, and — in one horrific scene — find language itself breaking down. If we are the sum of our memories, here character melts away. If X is the answer, what on Earth (or beyond) is the question?

Like Samuel Beckett’s Waiting for Godot, this is story about waiting, and how humans fill the time available. Like Caryl Churchill’s Blue Kettle, it’s also about the decay of language and the tricks that the mind plays on our consciousness. At its best moments, the characters long for authenticity in a world which seems so unreal — space is fundamentally alien. And for them the digital world can no longer satisfy their deepest desires. I have to say that some of McDowall’s writing is a bit undisciplined, and the last scene is unnecessarily drawn out, but the intensity of his vision finally carries the day.

The central ambiguity of the story — does everything happen in the abandoned Gilda’s diseased mind? Or are all the crew members equally destroyed by the endless silence of outer space? And who exactly is Mattie? — casts a beguiling spell and Vicky Featherstone’s slick production has some beautiful moments. I thought that designer Merle Hensel’s set could have been a bit more claustrophobic, but it’s hard to fault the intense and energetic cast: Jessica Raine (Gilda) performs a masterclass in neurosis and denial, insecurely chewing her hair and suggesting childhood abandonment, while Darrell D’Silva (Ray), James Harkness (Clark), Rudi Dharmalingam (Cole) and Ria Zmitrowicz (Mattie) step up nicely to the plate. Although not as dazzlingly impressive as his Pomona, McDowall’s play is certainly both thought-provoking and emotionally fraught. It leaves a taste of desolation in the mouth that feels chokingly like space dust.