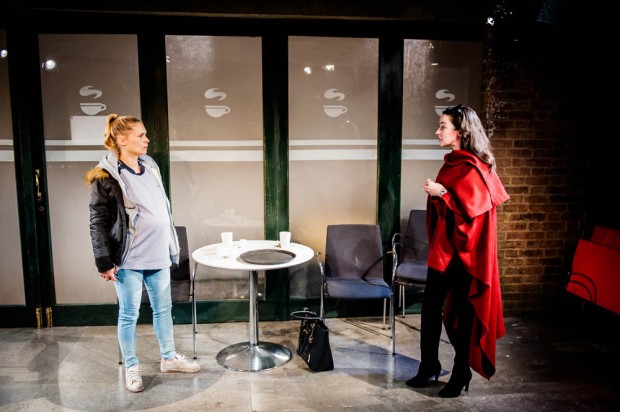 Critics like to identify trends, and to label new genres. So let me introduce the Hampstead Downstairs play, a sub-species of studio drama which is characterised by a small cast and an electric plot. Examples include David Eldridge’s The Stock Da’wa and Atiha Sen Gupta’s State Red, and most recently James Fritz’s Four Minutes Twelve Seconds. Hampstead Theatre has taken a creative approach to funding this new work in its Downstairs studio space by cutting back rehearsal time, and this helps to produce drama that might seem a bit rough at the start of its run, but is also excitingly edgy and urgent. For a while now, the best of this work graduates either to the main stage of this venue, or transfers to the studio space at Trafalgar Studios, where it invariably attracts plaudits. Thus it is with Morgan Lloyd Malcolm’s The Wasp.

The story is about two very different young women. Carla is a chavvy mum, with four kids and an accent that says “council estate”. Although she’s clearly pregnant again, she keeps smoking. Dressed as usual in a hoodie, cheap jeans and sweat-shirt, her appearance suggests under-privilege and poverty. By contrast, the plummy tones coming out of Heather’s well-made-up face instantly identify her as middle class. She is well groomed, fashionably dressed and drips privilege. She has not just a job, but a career, plus a high-flying husband and a lovely home. She sports a “statement handbag”. She’s a world away from her former schoolfriend. So when the two meet, we are immediately intrigued: it’s been almost two decades since they went to the same comprehensive, so why are they meeting?

We soon learn that Heather has looked up her former childhood friend via Facebook, and that things are not as good as they appear. Although she is married to Simon, the couple have been unable to conceive a child. On hearing this, Carla’s immediate reaction is to assume that Heather wants her to be a surrogate mother, given that she gets pregnant so easily. And at first the fact that there is an impressive amount of money in Heather’s handbag seems to confirm that the richer woman wants something from her former friend, who it soon transpires was not such a good friend when the women were teens. But when she gets around to making her proposal, both Carla, and the audience, get the first shock of an evening during which successive shocks propel the plot forward at a cracking pace.

Morgan Lloyd Malcolm scripts the story using all the ingredients of a classic thriller. The first deal between Heather and Carla is twisted, contradicted, upended and finally completely altered. With each exciting step we descend further and further down into the dark realms of manipulation and double cross. Each move provokes a counter move; each cheat is cheated. And this elaborate game of deception and counter-deception is brilliantly carried by both actors, MyAnna Buring (Ripper Street, Downton Abbey and now Carla) and Laura Donnelly (Outlander, Beowulf and Heather). Both not only have to play their roles, but also the role play that their characters’ schemes require. We’re watching actors playing people who are acting.

Of course, the entry ticket is that you have to suspend belief — and accept the complicated, almost baroque, quality of the story. At the same time, however unlikely the plot twists, what remains constant is the emotional truth of the relationship between Carla and Heather. At its most extreme moments, all the anguish of jealousy, resentment, betrayal, anger and hatred pulses through the play in a way that reminded me of the glory days of in-yer-face theatre, of the early work of Philip Ridley and Anthony Neilson. There’s a pregnant woman; there’s a sharp knife; and emotional antagonism. Guess what happens. Oh the guilty joys of rampant viciousness.

But this is more than a shocker. While the thriller thrills, and the emotions between the two women become clearer and more extreme, so are our prejudices challenged. All chavs are violent: right? Wrong! All nice middle-class women are harmless: right? Wrong! Not only are our class prejudices confronted, but also our society’s values. Notions of marriage, love of children and the desire for justice are all put into question. And Morgan Lloyd Malcolm both observes this with a sharp eye for detail and throws it all into our faces. For how long would we bear a grudge? How far would we go to extract revenge? Like ice, like fire; this is sensational.

The play takes its title from a central image — Simon’s collection of framed insects which includes an impressive wasp called a Tarantula Hawk, which stings its prey and plants its eggs inside them. Ugh. “Nasty sting,” comments Carla. And for a draining 90 minutes, Tom Attenborough’s compelling production delivers its stings and shocks with economy, emotional truth and no melodrama. On David Woodhead’s set, both Buring and Donnelly are convincing and enjoy the power play between their very different characters. They manage to be sympathetic and repulsive in a story that, however crazy, never rests and never lets you sleep.