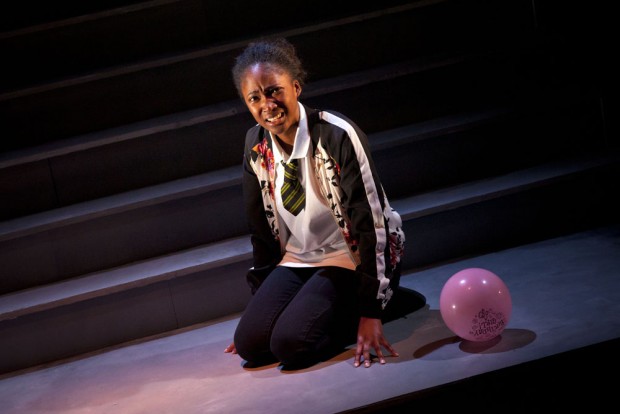 I’ve started this review several times, but deleted the results, so I hope that I can write it properly this time. I find it hard to stay cool about very emotive subjects. And emotive is a pretty poor word to describe Charlene James’s Cuttin’ It. When the performance I attended ended, the woman next to me was quietly sobbing, and everyone around me, including myself, seemed to be in various stages of shock. I found it hard to put my raincoat on. The actors in this 75-minute two-hander got a standing ovation, but the audience left the theatre in an unusually sombre mood. Why? Well, the subject of the play is female genital mutilation (FGM), and it’s hard to think of a more emotive subject.

As a nice, middle-class, white liberal male, I find the idea of FGM to be completely indefensible. Yet you can’t write a good drama about this practice with such an attitude — it would just be a rant. So the first thing to say about James’s powerful, award-winning, play is that it puts both sides of the argument. And with a subject as highly charged as FGM that really is an achievement. The result is both passionately imagined and moving, although once again maybe “moving” is too weak a word to describe the intensity of the feelings that radiate off the stage.

Set in contemporary London, the story starts with two fifteen-year-old girls who go to the same school, but don’t really know each other. They are a study in contrast: Muna is running late, and is slack and funny; Iqra is punctual, and is precise and serious. Both were born in Somalia, but although Muna has been raised in England since the age of three, Iqra arrived here at the age of ten, and has a Somali accent. On the 47 bus to school, Muna sits on the top deck listening to Rihanna, and texting her mates, while Iqra travels downstairs alone and a bit friendless.

Although they are opposites, Muna and Iqra are drawn together in what starts off as a rather tender play about female companionship. It’s no spoiler to say that both have suffered FMG while they were extremely young, and that Muna is worried that her sister Leyla, who’s about to celebrate her seventh birthday, will also be a victim of this barbaric practice. As her anxiety levels mount, the details of FGM in Britain today are revealed in a genuinely horrifying way. This is not only shocking, but also unforgettable — and not in a good way.

James writes with enormous confidence and candour about a thoroughly difficult subject. But the chief problem with the play is that although Muna is, from the first moments, abundantly alive, the character of Iqra is slightly less well rounded. Of course, James includes plenty of detail about Iqra’s terrible experiences of political violence in Somalia, and the young teen has clearly been traumatised, but somehow you feel that her creator has not quite got hold of the truth of her character, especially when compared with the mouthy and humorous Muna. But perhaps this simply shows that it’s harder to create a serious, traditionally minded teen than it is to write a more bouncy modern character.

Both Muna and Iqra have strong views about FGM. And they argue about the subject in the most heartfelt way: Muna is horrified that it could happen to her sister, and she condemns the practice as a form of unnecessary torture which has no religious sanction and which leaves women with medical problems for the rest of their lives. And problems that they are too ashamed and too afraid to seek help for. On the other hand, Iqra argues that this is practice sanctioned by tradition, and is an integral part of Muslim female identity. It is a ritual of cleansing and prepares girls for womanhood.

However deeply felt, Iqra’s arguments are less developed, and to my mind less passionately written, than Muna’s, although this hardly affects the compelling forward drive of the plot, nor its ghastly climax. It’s a hard play to watch, and the easy laughter of the opening minutes soon turns into a sickening feeling as the practice of FGM is described in excruciating detail. At the same time, Cuttin’ It raises troubling issues about religion, in this case Islam, and its traditional practices, in a truly compelling way. Is it acceptable that FGM should be practised in Britain today? Obviously not. But how do you stop it?

Gbolahan Obisesan’s superb production is well-judged and strongly performed by Adelayo Adedayo as Muna and Tsion Habte as Iqra. Both actors bring a total conviction and commitment to their contrasting characters which does a lot to make the show both credible and heart-stopping. Joanna Scotcher’s simple but effective grey-steps set has a red, torn-metal canopy which is a strong visual metaphor for the pain of the story, and the production’s final coup de theatre uses kids’ shoes as an even more powerful symbol of lost childhood. This is an urgent and vital piece of new writing. It’s also uniquely upsetting.