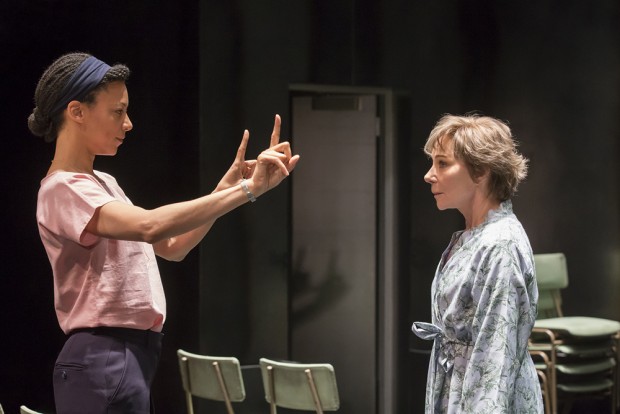 Playwright Nick Payne has carved out a distinctive dramatic territory — neuroscience. In his big 2012 hit, Constellations, he explored the effect on memory of living with a brain tumour, while two years later in Incognito, he married the story of what happened to Albert Einstein’s brain to the case of a man who had parts of his grey matter removed to cure his epileptic seizures. Now Payne returns to the fertile landscape of inner space with a story about a lesbian couple who, when one of them fails ill with a dangerous cerebral condition, benefit from rapid advances in medical science.

Set in the near future, Elegy is a mildly sci-fi story about a world in which diseases of the brain can be cured by means of a mixture of surgical removal of malfunctioning tissue and microchip implants that restore functionality. There is only one drawback: the memories eliminated by the removal of grey matter cannot be replaced. Payne then applies this scenario to a sixtysomething married couple — Lorna and Carrie. Lorna has fallen ill with a degenerative disease whose symptoms resemble a ghastly blend of dementia and tumour.

After her doctor Miriam outlines the brave new world of microchip implants, and increased survival rates, Lorna talks about her options with her wife, and both of them struggle with the implications of making a decision. The questions they face are acute: what’s the point of overcoming a terrible illness if your memory of the past 25 years — more or less the exact duration of Lorna and Carrie’s relationship — is completely lost? But then the alternative is a painful and humiliating death. Yet wiping out two and a half decades of your life is scarcely problem-free. It might liberate you, but what will it do to your partner? And, as the patient descends deeper into her illness, who should make the decision?

Payne writes with economy and grace, and his characterisation and humorous touches are attractively light. There are some neat little clashes between medical jargon and the experience of the patient, and the fact that both Lorna and Carrie are middle-class teachers allows for the seamless introduction of Scottish poet Douglas Dunn’s Elegies, especially a quotation from his poem “Anniversaries”: “It was September blue/ When I walked with you first, my love.” There’s a strong resonance in this moment with Dunn, who was mourning the early death of his wife, and the main themes of Payne’s play. But is this enough?

Not really. Although Payne has chosen a theatrical form — the non-linear play — which perfectly suits a story about memory and forgetting, the content of Elegy is disappointing. For while the subject of memory, identity and neuroscience is a fascinating one, what we get here is a smattering of ideas rather than a full and satisfying discussion. Having been introduced to these three characters I wanted them to stay around longer and say more than the 70 minutes of running time allowed. So the experience of watching this show is ultimately frustrating — and the result feels tricksy and superficial. Like a 10-minute 111 NHS helpline call rather than an hour-long consultation with a qualified doctor.

Josie Rourke’s production respects the acute intimacy of the play’s situation and Tom Scutt’s lightly futuristic set features a petrified tree, split down the middle and encased behind glass, in a room of pale pastel green institutional chairs. The theme of religious belief is subtly handled by Barbara Flynn’s emotional Carrie while Zoë Wanamaker makes the moving journey through disease, with some added help from Paule Constable’s excellent lighting, which at one point mirrors her mental state. Small gestures matter: at a particularly tense moment Wanamaker walks around the grey floor tearing at her hair. It looks so intensely felt. As Miriam, Nina Sosanya has a nice mix of professional detachment and scientific enthusiasm. Yet the play is too short to cure its audience of its need to know and explore more.