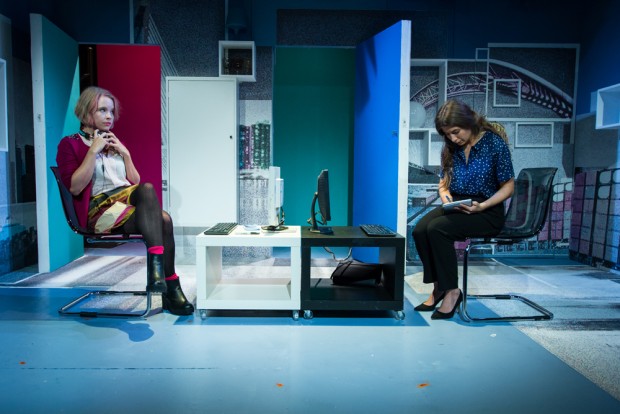 How many genders are there? The simplistic answer is two, but if you really think that then it’s time to go to the back of the class. In recent years, the rapid growth in perception of the fluidity of gender identity has meant that although there has been an increase in transgender stories in the news, culture has lagged a bit behind. Now every art form wants its own The Danish Girl. Step forward playwright Jon Brittain, who was inspired to write the hugely enjoyable Rotterdam after a couple of his friends transitioned in the late 2000s. Aware of the comparative scarcity of transgender stories in the wider culture, he created this tale of Fiona and her girlfriend Alice.

First staged at Theatre 503 last year, the play begins on New Year’s Eve in the Dutch city of its title. British twentysomething Alice has decided to tell her parents, who live in the UK, that she’s a lesbian — and is just about to email them. But before she does so, her lover Fiona tells her that she/he has always identified as being a man. In fact, he now wants to start living as a bloke called Adrian. So Alice faces the first of several gender-bending questions, including ones about her own identity: if your lesbian lover becomes a man, what does that say about you? Does it mean that you’re straight? And have you really been straight all along?

In the next few scenes, Brittain complicates this situation by adding Josh, a thirtysomething Briton who is the former lover of one of the couple, and the Dutch youngster Lelani, a work colleague. Compared to the rather repressed Brits, Lelani is a wonderfully conceived character, provocative, outspoken and truth-telling. And a lot of fun. In the pre-show warm-up her dancing tells you that she’s gonna rock. And she does. The various complex relationships between the characters create a satisfyingly tangled situation, which is brilliantly and humorously observed, and told in a well-structured and exciting way. With its thumping soundtrack, which touches all the right pleasure cells, and Ellan Parry’s versatile and modernistic set, the evening takes off on a fine mix of laughter and is sustained by thought-provoking issues.

It has to be said that when Brittain writes about sibling rivalry and couple relationships, he is more convincing than when he describes the feelings of Fiona/Adrian, where the writing occasionally feels more like research than genuinely imagined personal experience. But does this matter? Not a bit! It doesn’t really affect the fun aspects of this show, which is smart, sharp and emotionally moving. So much so that when Adrian finally says, “I don’t want to change the world, I just want people to see me the way I want to be seen,” you feel like cheering and punching the air.

Setting the story in the Dutch port city enables Brittain to introduce the theme of homesickness and distance, and to bring up questions of how personal identity relates to national identity. As the cultural differences accumulate, the famous politeness of the English begins to appear increasingly like moral cowardice and even like covert violence. Passive aggression indeed. In this story of the disruptive power of desire, relationships are seen as based on secrets and lies, which gradually are blown away by the hot breath of truth. And the truth is often best told by outsiders. With enormous energy, Donnacadh O’Briain’s pacy production takes the evening by storm, allowing its cast of four plenty of room to breathe and change.

Anna Martine and Alice McCarthy are both outstanding as the sharply contrasting Fiona/Adrian and Alice, being convincing in their confusion, their joy and their despair. They feel real and very much alive. In support Ed Eales-White as the slightly underwritten Josh and Jessica Clark as the magical leftfielder Lelani are likewise equally watchable. All four convey both the hilarity and the emotional truth of this occasionally painful, but fundamentally heartfelt and good-natured play. It’s great!