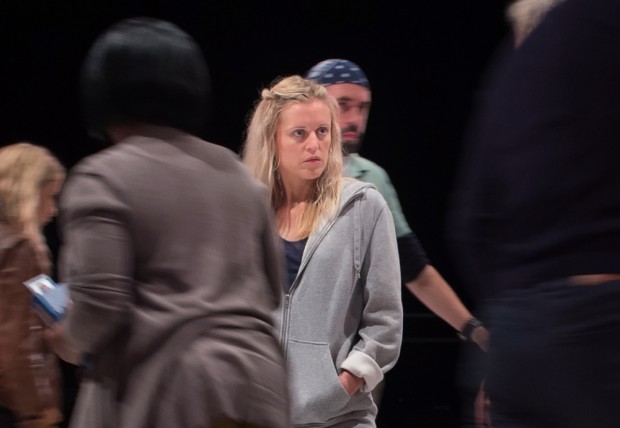 We all know what the word “addict” means, but what does it feel like to be one? Thirtysomething Emma — a smalltime actress played with immense conviction and quirky charm by Denise Gough — knows exactly. At one point in Duncan Macmillan’s engrossing new play, she says, “People who aren’t addicted to anything are really missing out, you know?” For the addict lives a life of glory: they feel complete, and loved and satisfied. Yes, that’s it. They love their addiction — and their addiction loves them back. Well, Emma should know: she has bottles stashed all around her flat, and a pharmacopeia in the bathroom.

But the trouble with addiction is that it interferes with your work. And threatens your life. In the first scene of the play, we see Emma playing the part of Nina in a small production of Chekhov’s The Seagull — and she is visibly drunk. As she stumbles around the stage, her co-actor (playing Konstantin) is aghast and we the audience immediately experience the same sense of excruciating embarrassment that Emma’s audience must be feeling. This clever beginning is typical of Macmillan’s appealing intelligence and wry humour. But on with the story.

Appalled by the blackouts she has been suffering, Emma soon fetches up at a rehab clinic and her doctor introduces her to the 12-step programme of Alcoholics Anonymous. When our heroine objects to the spiritual side of the therapy, bigging up her own rationality, an interesting debate ensues about whether AA is a cult or a cure. At first resistant to group therapy, Emma is gradually drawn into the programme — with its inevitable downs as well as ups. This is no surprise: after all, most addiction stories are the same old story.

But if Macmillan’s plot is not original, it is certainly compelling. People, Places and Things hums with ideas and occasionally even shouts its message across the footlights. It is informative, funny and often touching. At times it even breaks down and the tears flow as unwelcome truths emerge. Yes, it’s an emotional journey, and one which director Jeremy Herrin — in a co-production between the National Theatre and his Headlong theatre company — puts together beautifully on Bunny Christie’s white-tile set, which glows with a hard clinical aridity that is a visual metaphor for the difficulties of kicking destructive habits.

For better or worse, this is — despite a large cast of patients and carers — essentially a one-woman show. Everything is seen through Emma’s eyes, and Gough is onstage for the entire two-and-a-half-hours of running time. At first scornful, armoured and intelligent, her desperate desire to stay in control gradually cracks, with her face and body stricken by the agonies of cold turkey and then her attractively open features crumpling with the pain of facing reality. But if the whole play is her subjective experience, and Gough carries it all convincingly, Herrin helps by illustrating her hallucinations, her delusions and her highs. Lights flash, clones dance and the music builds. Yes, that’s the trouble with mixing drink and drugs — it can sometimes be fun.

The fact that it is one-sided means that the play has only brief interactions between the main characters. The chief casualty of this is the doctor, who is less a character and more of a mouthpiece for didactic statements about the theory and practice of therapy. And sadly, apart from an artfully constructed domestic family scene, when Emma goes home to confront her Dad and Mum, there are few moments of revelatory drama. Instead there are lots of ideas about addiction, about acting as a way of avoiding reality, and about, yes, the kindness of strangers.

If at times Macmillan is a bit too clever for his own good, there’s a lot to enjoy in a show that combines moments of pulsing dance music, of trippy lighting and disintegrating walls, and some very good jokes. As well as Gough’s bravura performance, there is excellent support from Barbara Marten, who doubles as the doctor and Emma’s Mum, and Kevin McMonagle as Dad and a troublesome patient, while Nathaniel Martello-White and Alistair Cope are similarly excellent as the sympathetic patient Mark and a care-worker. The result is an immensely absorbing, occasionally harrowing, and often moving evening. Tears flow offstage as well as on.

Sometimes a particularly intense performance can almost blind you to a play’s weak points. Almost. Gough is so great in the role of Emma that it makes writing about other aspects of the production quite difficult, especially with a play that stays with you so naggingly because of its strong production values. I couldn’t stop thinking about it, and her. And comparing this play to Nick Grosso’s Ingredient X, David Eldridge’s The Knot of the Heart and Lucy Prebble’s The Effect. Central to Macmillan’s drama is the idea that Emma suffers from such low self-esteem that she is completely devoid of feeling: she has to act in everyday life; she can’t just be; she can’t feel. Hence her choice of career: as an actress. For the entire play, she slips from one assumed personality to another. This is great, but Macmillan never really says exactly why she has turned out like this. As with so many addicts, the parents are implicitly to blame — and, also typically, when we finally meet them at the end of the show, they seem quite ordinary. As an example of the playwright being a touch too clever, you can’t beat the episode when Emma gives an account of her life that echoes Ibsen’s Hedda Gabler. Of course, this chimes nicely with the idea of her being an actress in daily life, but is it plausible that another patient recognises this immediately? Just asking…