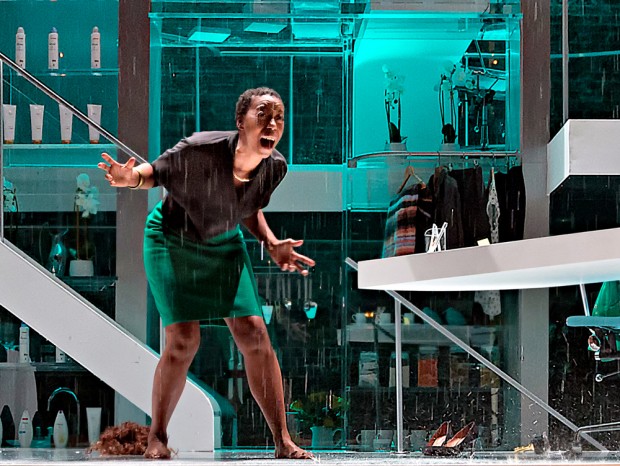 Don’t you just love celebrity hype? Kim Cattrall’s name alone sold out this show, which runs over the notoriously difficult Christmas period. But sometimes star-casting backfires, and when she had to withdraw from the production for medical reasons, the theatre had to find a replacement. Step forward Noma Dumezweni, an Olivier-award-winning performer who’s due to make her directing debut at this venue next February. But that’s enough, for the moment, about celebrity — what about the writer and the play?

The story, written by playwright Penelope Skinner, starts off with the title character Linda Wilde in action. She’s a 55-year-old Senior Brand Manager for the Swan Beauty Corporation, and she’s making a pitch about selling cosmetics and anti-ageing cream to the older woman, so often invisible to the sexist eye of contemporary society. (You can see at once why Cattrall was originally cast in the role.) Linda’s idea is that “I’m not just pitching an ad, I’m starting a revolution.” Behind her, the huge set, designed by Es Devlin, glows like a shining beauty counter, all metal, glass and products with her slogan, “Changing the world one girl at a time”, projected onto it, so she’s in her element. Oh yes, she is. Unstoppable.

In scene two, we arrive at her home, in her kitchen, also all metal, glass and products, while Linda prepares a meal for her husband Neil (54, a teacher who also plays in a rock band), and their two kids, the half-sisters Alice (25) and Bridget (15). In this clean domestic environment, the tensions of work — where her boss Dave is encouraging a much younger executive, Amy, with her very different ideas about beauty — seem far away. But wait a minute. Isn’t Alice a bit old to be wearing a skunk onesie, and what can Bridget choose for her drama audition when most playwrights write better roles for men than for women?

This softly feminist picture of normality is about to be ripped to pieces as Linda, who initially comes across as an attractive character, is revealed to be not so nice after all. Skinner plots the play to bring out Alice’s damage, due to some rather familiar internet-based experiences at school, and then condemns Linda to a very similar fate. The harmony between their experiences, and the way that the mother follows the daughter to a similar doom, is one of the more gratifying aspects of the play. At the same time, Skinner introduces not one, but two Nemesis figures: there’s Amy at work, and also the 28-year-old singer Stevie, who is in her husband’s band. So it’s one oldie against two young ones. Not really a fair fight. The dice are further loaded against Linda by the fact that her daughter is undermining her.

It has to be said that Linda is a monster of a role, a highly successful and award-winning woman who falls spectacularly from grace. Her self-absorption, self-belief and self-worth are brilliantly signalled by Dumezweni, who during tonight’s press night played some of the scenes with a script in hand due to the hugeness of the part and the fact that she stepped in only 10 days ago. In a performance of bravery and compassion, she brings out the character’s vulnerability as well as her selfishness, and tackles the evening with believably high-octane strenuousness. It’s simply great to watch.

But while Linda is also self-deluded, even as she is perfectly clear about other people’s drawbacks, this is not exactly a tragic story. Despite some very sad moments, the character never really takes off. This is not due to Dumezweni, but to Skinner, whose storytelling is unnecessarily drawn out, disappointingly predictable and often banal. A lot of the dialogues are over-explanatory, and the themes about body image, older women and intergenerational conflict are stated and restated with woeful repetitiveness. The result is a plod that gets bogged down in almost three hours of stage time. The joys of the revenge scene, and of the climactic tempest, are smothered by scenes that are too long and dialogues that are often redundant. The female King Lear theme is superfluous.

So despite some good satirical points, and some good jokes, Skinner takes the temperature of the times with a rather insensitive thermometer, one which is frustratingly unsubtle. Neither Michael Longhurst’s vigorous directing, nor the set alone, can save the show. The talents of the actors playing the rather underwritten other characters, namely Imogen Byron (Bridget), Karla Crome (Alice), Jaz Deol (intern), Amy Beth Hayes (Amy), Dominic Mafham (Neil), Merriel Plummer (Stevie) and Ian Redford (Dave), fail to lift a play whose occasionally passionate passages and offhand topicality are lost in pages of banality.