Home » Reviews » This May Hurt a Bit, St James Theatre

This May Hurt a Bit, St James Theatre 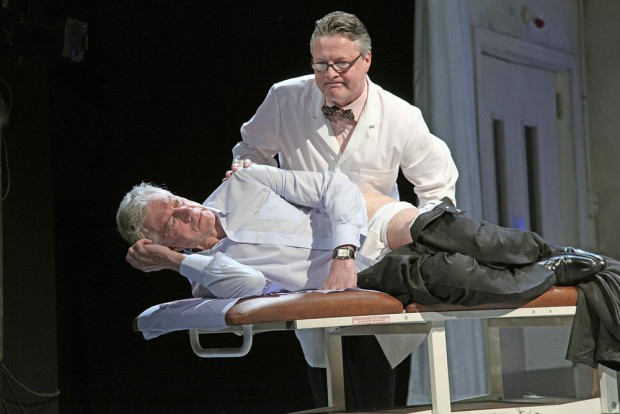 When I first heard that the new play from Out of Joint was about the NHS I thought this might be a delayed result of the impact of Opening Ceremony of the 2012 London Olympics: all those prancing nurses surely deserve a play of their own. In fact, the emotional fuel behind Stella Feehily’s new play comes from nearer home. In 2006, Max Stafford-Clark, her husband and the play’s director, suffered a stroke, which means that much of this drama’s depth of feeling comes from the couple’s first-hand experience.

The play tells the story of one family. When Nicholas James, a widower, begins to suffer prostate problems, he seeks medical help from the NHS. But his ability to book a check up is delayed by a malfunctioning computer. Meanwhile, at the home of his mother, Iris, his rich-bitch sister Mariel and her American husband, Hank, who is an orthopedic surgeon, are over from New York on a visit. These characters debate the good and bad points of the NHS, with the Americans advocating private medicine while the Londoners remain loyal to free state provision for all.

In the second half, Iris has had an attack of “transient global amnesia”, a rare condition that results in her believing that she’s back in the 1970s. She is treated with kindness and consideration by the ambulance crew, and admitted to a Stroke/Geriatric ward at a local hospital. Here Iris, along with Nicholas and Mariel, experience the depressing details of life in a not-untypical hospital: dirty ceilings spattered with blood and nurses run off their feet because of staff cuts.

As well as being an account of the fictional experiences of one family, the play also features a barrage of theatrical effects designed to show that introducing the market will damage the NHS: there’s an attack on the Coalition government’s Health and Social Care Act, a lecture on the effects of disastrous private finance initiatives, choruses of medical professionals, interruptions by demonstrators, dance sequences, songs and other Brechtian effects.

Having been in hospital myself a couple of years ago, I must say that Feehily’s picture of the NHS is perfectly accurate. There’s an odd, occasionally surreal, mixture of caring, hardworking staff along with some frustrating instances of incompetence; not all nurses are angels. And even those that are very good can lose their tempers. But most NHS workers manage to behave well during emergencies — which is when you need them most.

The best moments in a short and episodic evening are those where the diagnosis of the troubles of the NHS has a strongly metaphorical edge: the NHS appears as an aging bed-ridden patient; the institution’s prospects are delivered as a weather forecast; Nye Bevan, the saintly Labour founder of the NHS, locks horns with Winston Churchill, the cynical arch Conservative. Margaret Thatcher appears as a talking budgie. The Grim Reaper crosses the stage.

This May Hurt a Bit is a piece of blatant agitprop, and it is proud of the fact. At times, its effects are rather crude and obvious, and there’s a strain of sentimentality in the constant evocation of the spirit of 1948, the date of the NHS’s founding. Criticism of the Coalition government is rather repetitive, and Thatcher’s free market policies are an easy target for scorn. Although I laughed at the jokes, and was quite moved at times, I also felt that the whole piece — which confirms all my own prejudices — while perfectly topical, is a bit too easy.

Still, Max Stafford-Clark directs with briskness and imagination, and his cast, most of whom play several parts, are uniformly impressive. Stephanie Cole is heartwarming as Iris, Brian Protheroe is stoic as her son, and Jane Wymark delightfully snobby. Frances Ashman and Natalie Klamar as patient and nurse are both excellent. The set, designed by Tim Shortall, works well. At the end of the evening, I left the theatre full of a sense of my own mortality and fervently hoping that the next siren I hear will not be an ambulance that’s been called for me.