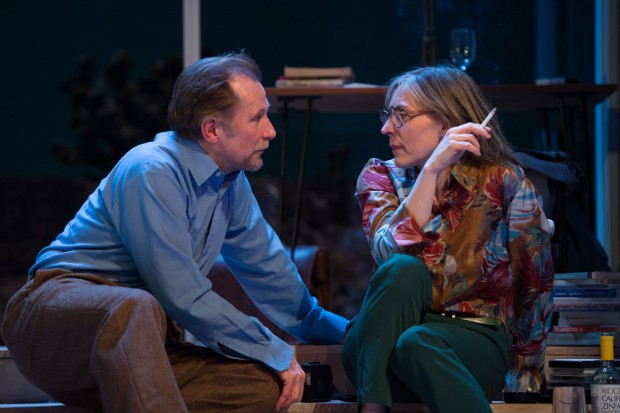 What exactly is unconventional about an unconventional couple? In Abi Morgan’s new two-hander, an adaptation of last year’s book of the same name by She and He (a West Coast American couple now aged 90ish), the situation is simple. Boy meets girl at college, they lose touch, then meet again 20 years later, when both are married with kids. When they start an affair things go wobbly, but then she asks him to sign an agreement: in return for a house and income, she will provide him with “mistress services”.

Okay, it’s not your usual prenuptual agreement, so what does it involve? First, they live in separate houses. He is very rich. Second, she agrees to provide “All sexual acts as requested, with suspension of historical, emotional, psychological disclaimers”. Eh? Quite. Basically, he is allowed to have sex with her whenever he feels like it. Well, he is very rich. But how does this all work out in practice?

Like the book, the play is a series of recorded real-life conversations between He and She, which take place in bed (surprise), over dinner (surprise) and on the phone (surprise). Alright, no surprises here. They talk about sex, but not very much. He likes blow jobs; she doesn’t. He once could fuck five times a day. Or so he says. And, er, that’s about it. For an unconventional story about remarkable people this is as straight as a church tea party. Chaucer, Shakespeare, Stendhal and Zola will make you more randy than this couple.

Instead of exploring sex, they talk endlessly about feminism, about men and about women. Well, the story starts in the 1970s, and Her dissatisfaction is entirely recognisable. But the problem is that their conversations are almost completely impersonal; the words they use are abstract, not concrete; they are bookish, not felt. There is no sweat on the sheets of this relationship. There is no passion; the emotional temperature is chilled. If Madame Bovary discovered in adultery all the boredom of marriage, She and He unsurprisingly discover all the serenity of an old married couple. Not so unconventional after all.

Abi Morgan’s adaptation reproduces all the faults of the original book, and this piece has none of the excruciating moments that make her Shame, Lovesong and Sex Traffic so memorable. In terms of playwriting, this is a cliché festival that manages to avoid wit, humanity and emotional force. Now this is probably some kind of achievement; surely, it can’t be that easy to write so blandly. Apart from one scene about cancer, there is nothing here to frighten the horses.

Vicky Featherstone directs this maddeningly PC tract, with its hectoring and complaining She, and dryly charmless He, with reasonable economy, yet neither Saskia Reeves nor Danny Webb are remotely convincing. For this play to work, you need to believe that their relationship once had fire, once had spit, once had conflict and climaxes. Instead, you get a couple for whom inertness would be a compliment and who seem to be as arid as the desert in which their meetings take place. As the characters acknowledge in the end, the best thing about this show is its title.