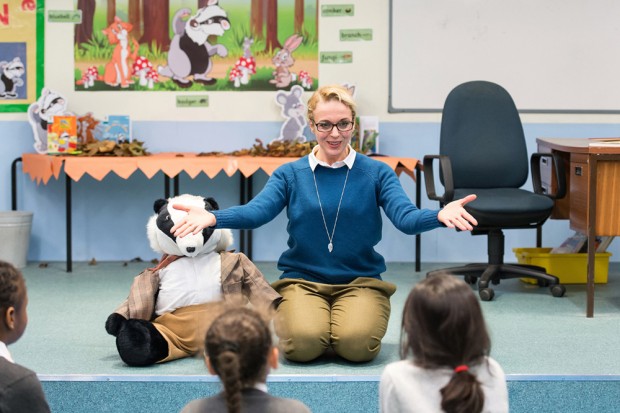 Much of the recent programming of the Royal Court has flaunted a preference for gimmicky gestures rather than the hard work involved in developing new playwrights. So after its staging of book adaptations, fictional documentaries and monotonous lectures here comes the latest gimmick: a play with a cast of a dozen eight-year-olds. Given that the story of the play is about an uprising of primary-school kids is this: a) literalism gone mad; b) an interesting and challenging idea; or c) an innovative approach to casting?

Okay, children, are you now all sitting comfortably? Then, I’ll begin: once upon a time, there was a school called Castlegrave Community Primary School and this school had a class called N4, which was decorated with pictures of people from Willowy Wold, and was taught by the nice Ms Newsome. The school head was called Ms Evitt and she was being very helpful to the government by trying out a new teaching scheme called Badger Do Best.

At first, the lovely children of N4 loved Badger because Ms Newsome told them sweet little stories about him. Then, one day, the children got fed up with Badger because they were tired of being told what to do al the time. Then one little girl, called Louie, sang Badger’s little song, but she changed the words to “poo” and “piss”, and this made the other children laugh. Soon Louie was “king” — and then the fun really started because the grown-ups got very angry.

As a metaphor for constant changes to the educational system, Molly Davies’s God Bless the Child is powerful and pertinent. Sali Rayner, the character who perfects the Badger Do Best system, is dangerously passionate about teaching children good behaviour rather than the three Rs. And Ms Evitt, Ms Newsome and Mrs Bradley the classroom assistant all have different motives for cooperating, or not, in this radical experiment, which is a pilot soon to be rolled out across the nation.

But although this satire is joyfully acute, both observant and intelligent, there’s a real problem with its parody of child-led progressive education. In the play the only alternative is a regime of rigorous tests and fact-based learning. So really, the contest between the two methods has no winners, except perhaps the kids, who are led by the fascinating Louie, and whose power over her classmates comes from her ability to tell better stories than those created by the adults.

Yet the kids’ rebellion, timed to coincide with Sali Rayner’s visit to the school, turns out to be more of an idealistic fantasy than a real anarchic act. It’s not If…. Still, if you can forgive the sweetness of this portrait of young kids, there’s a lot to enjoy in this engrossing and punchy satire of a money-led, rather than child-centred, educational system. Although some of the extracts from the Badger Do Best stories are over-complicated and longwinded, it’s hard to quarrel with the play’s final line (amended from a more defeatist one in the printed play text): “And that is how the girl learnt that it takes more than one child to change the world.”

Vicky Featherstone’s lively production takes place in Chloe Lamford’s super-realistically recreated primary-school classroom, and features a cast of bright young boys and girls, led on press night by Nancy Allsop as Louie. But these boisterous kids are only part of the show. The adults in the cast are familiar faces such as Amanda Abbington (Sherlock and Mr Selfridge), Julie Hesmondhalgh (Coronation Street) and Nikki Amuka-Bird (Small Island). Abbington’s Sali Rayner is relentlessly upbeat and contrasts nicely with Amuka-Bird’s Ms Evitt and Ony Uhiara’s Ms Newsome, with Hesmondhalgh as the down-to-earth Mrs Bradley.

Oh, and the answer to the multiple-choice question in the first paragraph is, of course, b.