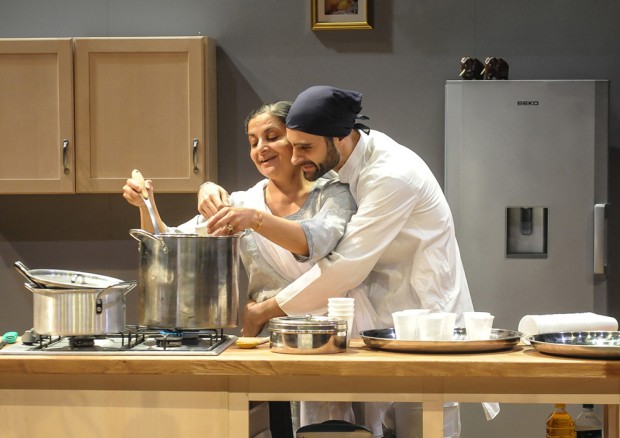 Some days, I feel very sorry for playwrights, especially those that become notorious through no fault of their own. If their most famous play causes enough controversy, it can take decades before people forget it. So now, 10 years after Gurpreet Kaur Bhatti’s early play, Behzti (Dishonour), caused violent protests at the Birmingham Rep because of its depiction of a rape in a Sikh temple, I can’t think of any other way of starting this review of her latest without mentioning it.

Khandan (which means family) is a co-production between the Royal Court and Birmingham Rep (where the play premiered in May) and a less provocative work, being a warm and well-rounded study of two generations of a migrant family originally from the Punjab. Having arrived in Britain in 1969 with her now-dead husband, the sixtysomething Jeeto Gill dreams of returning and retiring to the family farm. Her son, Pal, has inherited his father’s shop but plans to sell it to fund a special retirement home for Asians.

This international business — helped by an Indian investor — keeps him preoccupied, while his white wife Liz, who has been in conflict with her own family because of her decision to marry Pal, desperately wants a baby. He is less bothered about passing on his genes. Nor is his older sister Cookie, married to the builder Major, much of a homebody. She prefers to run her beauty salon, and has a secret of her own. And then there’s cousin Reema.

With a deft touch, Bhatti puts all these ingredients on the table in Act One; then, in Act Two, she throws them into the pot and turns up the heat. Gradually, a very funny comedy of manners turns into a darker tale of crushed hopes and savage turns of fortune. As tea is boiled up in pans of water, the symbolic sharing of food gives us time to get a taste of the piece’s other themes: the power of family honour; the importance of land; the possibility of surrogate parents; illusions of home; the disruptive force of sudden desire. And there’s some great music too.

What the play does brilliantly is to expose a whole series of contradictions behind the facade of the traditional family: fathers that drink, husbands that drink, wives that can’t conceive, wives that want to have affairs, mothers that don’t like children and fathers that are stuck with them. Reality proves tougher and more taxing than the illusion of the happy family. This might not be an original conclusion, but Bhatti presents it with enormous compassion — and using a really fine mix of humour and sadness.

As one setback follows another, Jeeto grows in stature from a comic crabbed figure into a powerful matriarch whose powers of endurance show her true grit. Whenever Pal struggles to do the right thing, she is there, urging him on, injecting a touch of iron into his soul. At the end of the play, none of the characters are happier than they were at the start, but all have learnt to take life’s knocks. And to bounce back.

But Bhatti’s most wonderful gift to the audience is her vivid characters. And this, which is characteristic of her work, is especially true of her women: the foul-mouthed but matronly Jeeto, the Brummy-tongued Cookie, the desperate Liz, the bookish but passionate Reema. At just over two and a quarter hours the play is almost too short: I felt I wanted to spend more time with these people, and I left the theatre imaging how their lives might unfold.

Roxana Silbert’s bright production, with its shiny perfect kitchen designed by Jamie Vartan, is entertaining as well as moving, and her cast is perfect: especially Sudha Bhuchar (Jeeto), Rez Kempton (Pal), Lauren Grace (Liz), Preeya Kalidas (Reema) and Zita Sattar (Cookie). Khandan is a wonderful account of one particular family that also seems to raise a mirror to the nation. It might not be the most cutting edge work, but there’s no need to feel guilty about enjoying its pleasures.