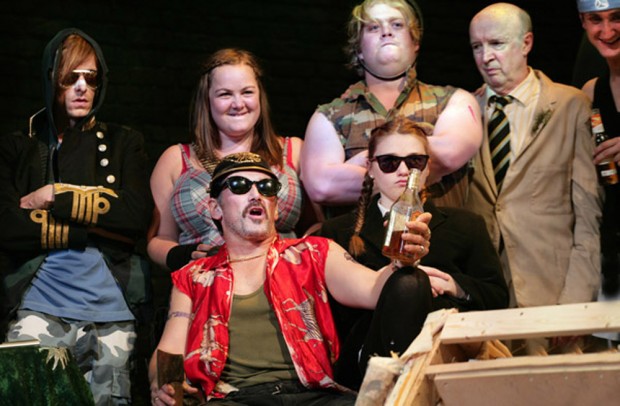 In October 2009, BBC television celebrated the fortieth anniversary of Monty Python’s Flying Circus, one of the iconic programmes of postwar British culture. Watching the Python antics now, what’s striking is their thrilling mix of satire about everyday life with surreal and absurd elements. And on mainstream television too! The show also poses the question: if a mass medium can be so adventurous, so unnaturalistic while remaining completely comprehensible, why is British theatre still tied to the straight road of social realism?

Certainly, 2009 has been a good year for theatre as social comment, with a distinct focus on the big three issues: economic collapse, religious segregation and racial disharmony. Without doubt, the biggest hit has been Lucy Prebble’s Enron (Chichester/Royal Court), in a highly imaginative production directed by Rupert Goold for Headlong theatre company. With wonderful clarity, the play explains the complex fraudulent financial instruments developed by the company’s execs by using a variety of theatrical devices, from the straight lecture to visual metaphors involving three blind mice, baby dinosaurs or light sabres. Although this is a story about a Texan energy giant, its account of virtual capitalism spoke directly to audiences affected by the global credit crunch. It was a show that, for all its defects (the storytelling is not always clear and the ending lacks a showdown), seemed to soar.

By contrast, David Hare’s The Power of Yes (National) kept its feet firmly on the ground. Although its subject was the global financial collapse, Hare chose to dramatise this by putting himself onstage, and telling the story of his meetings with some key players. Sadly, he had little access to Americans such as Treasury Secretary Henry Paulson or Alan Greenspan, so the play exaggerates the importance of the City of London. If verbatim theatre populated by men in suits can be visually dreary, Angus Jackson’s production proved that if you move them around the stage fast enough, then a docu-drama can be cerebrally satisfying even if it looks dull.

Equally insular, if much more vivid as a piece of writing, was Jez Butterworth’s Jerusalem, which lit up the Royal Court stage with its state-of-the-nation pastoral. Set on St George’s Day, it shows what happens when the local council tries to evict Johnny Rooster Byron from his woodland mobile home. The opening snapshot, a nocturnal bacchanalia of house music, gyrating girls and drug-addled wildness, introduces this account of a green unpleasant land. Brilliantly embodied by Mark Rylance, Rooster is an absent father, incompetent male and has a suspicious liking for very young girls. At the same time, he’s a hippie anarchist who seems to be directly plugged into an olde myth of Deep England, rural, pagan and dreamy.

But the most controversial plays of 2009 were those which scratched at the issue of segregated communities. Richard Bean’s England People Very Nice, given a huge and hugely popular production by Nick Hytner at the National, looked at several hundred years of migration to London’s East End by fielding a squadron of racial and cultural stereotypes. Although this epic comedy was full of laughs, it’s hard to deny that it managed to be both offensive and something of a one-joke evening. At the same time, its picture of Muslims who refuse to assimilate did articulate an urgent social problem.

Belatedly, British theatre started gathering plays about Muslims. These include Alia Bano’s Shades (Royal Court), Atiha Sen Gupta’s What Fatima Did… (Hampstead) and Cosh Omar’s The Great Extension (Stratford East). Equally controversial, although much shorter in length, was Caryl Churchill’s Seven Jewish Children, a ten-minute piece written in response to the Israeli attack on Gaza. This beautiful play provoked the defenders of the state of Israel into bilious paroxysms of hatred, and Churchill was regularly accused of every variety of anti-Semitism and racial hatred. Needless to say, these thought crimes were more in the minds of her accusers than in the text of the play.

An index of the confidence of the new writing scene is the number of big projects, with the Tricycle Theatre leading the way with two seasons, The Great Game: Afghanistan (thirteen short plays about the country’s history) and Not Black and White (three plays about race). Last year, there was Mark Ravenhill’s epic play cycle, Shoot/Get Treasure/Repeat; this year saw several double bills, the best being Steve Waters’s The Contingency Plan, two plays about climate change. Such ambitious projects reflect the rise in state funding for new writing.

As far as theatres are concerned, the key word was continuity. So the Royal Court continued its exploration of American drama by staging a Wallace Shawn season, as well as a German season, and promoting a small group of new writers such as Polly Stenham and Mike Bartlett. The Bush theatre continued its exploration of different kinds of theatre space and different kinds of teen angst, but experienced problems with a leaky roof. The Soho theatre continued its search for a defining political play but only found Steve Thompson’s Roaring Trade and Everything Must Go!, a review on the subject of the credit crunch. And the National continued to stage nostalgic history plays.

This was also the year in which the Hampstead Theatre celebrated its 50th anniversary, having originally been set up by James Roose-Evans in 1959 as a fringe theatre before fringe theatre was even invented. Although artistic director Tony Clark staged competent revivals of work ranging from Noel Coward to Philip Ridley, his own taste in new plays inspired an exaggerated loathing among critics, who regularly dismissed each new offering as a dud. By the autumn, Clark had had enough, and resigned.

Outside London, it was business as usual at new writing venues such as Live Theatre, the Liverpool Everyman, Manchester Royal Exchange and Birmingham Rep. At the Edinburgh Festival, trend spotters zeroed in on the growth of what the Daily Telegraph’s Dominic Cavendish called the theatre of intimacy: for example, the Traverse’s Internal invited half a dozen spectators at a time to pair off with an actor for a round of mock speed-dating. Suicide was another theme: Daniel Kitson’s The Interminable Suicide of Gregory Church (Traverse) and Kim Noble’s show (Kim Noble Will Die). Other plays ranged from in-yer-face aggression to romantic comedy, that is from Dennis Kelly’s Orphans to David Greig’s Midsummer. But, despite such successes, there is a feeling that the good old Traverse has been partially eclipsed by the new kid on the block: the National Theatre of Scotland.

In Wales, the establishment in 2007 of a specialist venue dedicated to new writing, when Sgript Cymru joined forces with the Sherman Theatre in Cardiff, under director Chris Ricketts, has been followed in 2009 by the setting up of a National Theatre of Wales. Organised on the Scottish model, as a production company rather than a flagship building, it is led by artistic director John E McGrath, and will be staging one show per month starting from March 2010.

Elsewhere, the onward march of site-specific theatre resulted in a long life for shows such as Caravan, Look Left Look Right’s verbatim account of flooding, or Clare Bayley’s The Container, about migrants, where the audience shared tiny claustrophobic spaces with the actors. More interesting were the bigger projects, such as Adam Brace’s Stovepipe, a Bush theatre show about military contractors in Iraq that was staged as a promenade in an underground car park. As far as more self-reflexive work is concerned, Tim Crouch’s England and The Author prove that he is one of the most intelligent performers working in British theatre today, and his satire on the typical Royal Court in-yer-face play in the latter work was hilariously accurate.

The good news about strong new writing from established names such as Simon Stephens (Punk Rock), Roy Williams (Category B) as well as newcomers such as In-Sook Chappell (This Isn’t Romance), Alexi Kaye Campbell (Apologia), Bola Agbaje (Detaining Justice), Lucy Kirkwood (It Felt Empty When the Heart Went at First but It Is Alright Now) and Nick Payne (If There Is I Haven’t Found It Yet) is offset by a general lack of energy and excitement. There’s also a feeling that although new writing responds to the great public events, it tends to do so in ways that are traditional and, with only a couple of notable exceptions, not very exciting theatrically. Compared to the glorious legacy of the Pythons, British new writing remains curiously timid in form, content and sensibility.