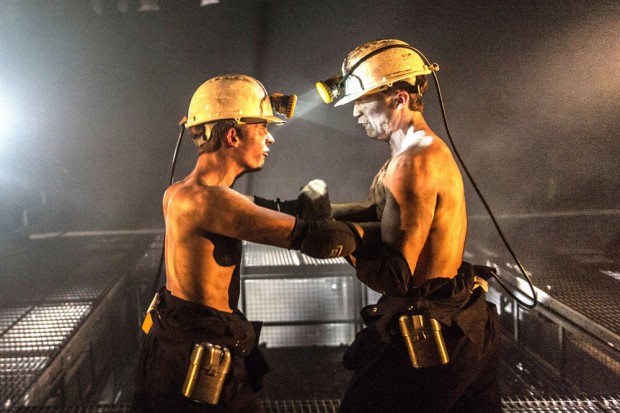 When, before the great miners’ strike of 1984-85, Britain still had a coal industry, the miner was at the centre of a never-ending class war: you could see him either as an honest proletarian, in the vanguard of the struggle for better pay and conditions, or as a uppity worker, whose union held the country to ransom. Since the dismantling of the coal industry, an element of sentiment has entered the equation. Now, we miss the horny-handed sons of toil — and shed quiet tears when we watch films such as Brassed Off.

So Beth Steel’s new play, Wonderland, which looks at both the personal and political lives of a group of miners, comes with more then the usual amount of baggage. Those who were grown up in the 1980s will have firm opinions about the struggle; those born after might not really care. And why should they? Still, in what is clearly a labour of love, she does her best to engage us by taking the audience down the pit right at the start of the play.

With seating on four sides of designer Ashley Martin Davis’s impressively powerful and evocative set, Edward Hall’s muscular production feels like a visit to a netherland, a secret world which has its own codes and behaviours. Two 16-year-old lads, Malcom and Jimmy, take us down with them on the first day of their work as pitmen. It’s a classic way of showing us the many rules and regulations of life deep underground, and it works perfectly well. This world is a fascinating place.

In this hellishly hot darkness, men sweat and toil in unbelievable conditions. Steel introduces the old hands — Tilsley, Colonel, Bobbo, Spud and Fanny — and gives us glimpses of their fierce loyalty and complex camaraderie. She shows how the danger of this unpredictable Hades results in strict codes of conduct, and how the new boys are inducted into the job. There are dirty stories, black humour and earthy advice. These are real men — and the play throbs with testosterone.

With evident pride, one man claims that his wife has never heard him swear nor fart in his married life. But these traditional masculine declarations are mixed with some more affectionate moments: at one point, an old hand kisses one of the apprentices on the lips. Like one of those work plays of the 1970s, there’s a lot of sweaty effort in these scenes, alleviated by songs (although I suspect that real miners often sang pop songs as well as working-class mining ballads) and plenty of jokes.

From the start, these underground scenes alternate with others that show another universe: that of monetarist economists, Tory government ministers and Coal Board leaders. And the odd maverick. We see, in a series of documentary snapshots, how the Thatcher government planned the strike that ended up by destroying the coal industry. And how Arthur Scargill’s National Union of Miners walked into the trap.

In the second half, we watch how the characters we’ve been introduced to go on strike, attack scabs and finally participate in the great Battle of Orgreave. Once again, the forces of law and order, bolstered by plainclothes cops and quasi-military personnel, are better prepared. Miners are beaten up, miners are arrested, miners are harassed. The final, painful half-an-hour shows how the strike is broken, and the effects of defeat. It’s both moving and depressing.

Steel’s writing is at its best when she goes down the mine and shows us how the powerful bonds between the men are forged in the heat of work. Once she tells the story of the strike, the tension is defused and the pace slackens. The big set piece battles need more bodies on stage than this production can muster and the general effect is slightly weak. More seriously, Steel and Hall can’t help but evoke a lost world — and this gives the show a touch of nostalgia, and a tang of sentimentality that both struggle to avoid, not always successfully.

At its worst, the play is a bit declamatory, and although women are mentioned, I found it odd that we never see any on stage. A very committed cast — with David Moorst and Ben-Ryan Davies as Malcom and Jimmy — and including good work from the likes of Nigel Betts, Gunnar Cauthery and Paul Rattray, connects well with the emotional force of the workers and strikers. But even the most passionate speeches couldn’t distract me from the core sadness of this tale.