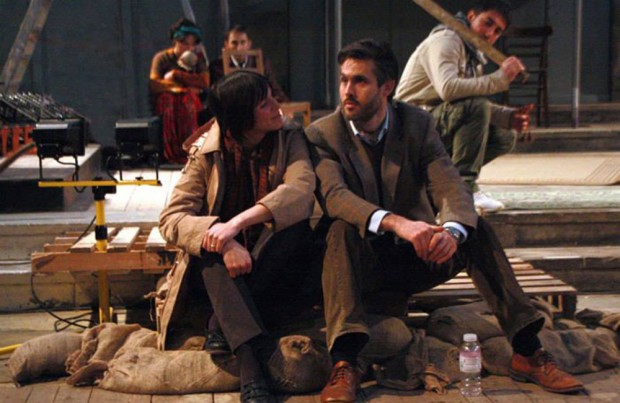 Yesterday, I went to see a revival of David Edgar’s 1994 masterpiece, Pentecost, directed by Gavin McAlinden at St Leonard’s church in Shoreditch. The play tells the story of a fresco discovered in a Balkan church which could overturn our ideas about the history of western art, and in turn the story is overturned when the place is taken over by a group of refugees who hold the painting hostage. Although the pews were hard, the location was a joy: it was lovely to see the church’s stained-glass window alive with the light of day slowly fading to black, while the battered walls and stone floors were just right for the play. There is also something very fitting about a work called Pentecost, and which tells and retells variations on the Christian story of the resurrection, having its final performance on Easter Day. But the best aspect of the production is the large multi-ethnic cast, the actors having been chosen to reflect the rainbow nationalities of the play in a way that was not really possible in 1994. In this case, the casting carried much of the meaning of the play, which among other things explores the changing identity of Europe in the years after the Fall of the Berlin Wall. In other European countries, there are simply not enough actors of different ethnicity for this to be possible. But we can do it in London. Isn’t this a cause for celebration?