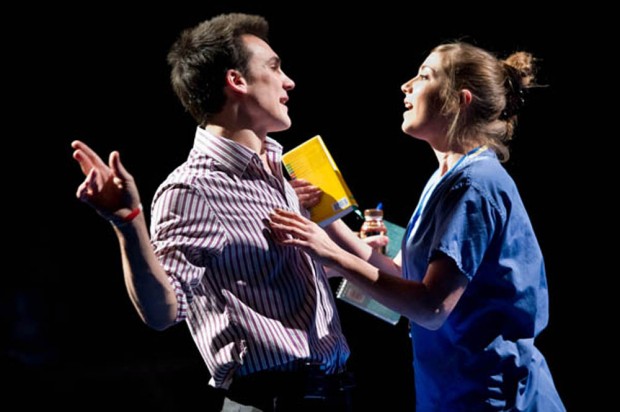 Playwright Nina Raine has a gift for evocative play titles. Her 2006 debut was called Rabbit, and her sellout success at the Royal Court last year was Tribes. This time, we seem to be on safari with Tiger Country, but appearances can be deceptive. Raine’s titles conceal as much as they reveal: Rabbit was not about furry creatures, but about chatty women; Tribes was not about anthropologists, but about a family and the deaf community; and Tiger Country is located not in South-East Asia but in a busy London hospital.

On an open theatre space, designed by Lizzie Clachan, the play invites us to watch a series of rapidly performed surgical operations, attend acute medical emergencies and witness arguments among a group of fractious professionals. Unlike many hospital dramas, such as Tamsin Oglesby’s Really Old, Like Forty Five, which look at the patients in hospitals through the eyes of fantasy, Raine’s play focuses realistically on the doctors and surgeons, mainly in the manic atmosphere of their workplace. This is a play about scrubs, swabs and injections.

Unsurprisingly, our main guide is a new doctor: young Emily is bright, obsessive and good at her job. Gradually, however, the reality of hospital life — patients dying despite your best efforts to keep them alive — puts a strain on her own health, and on her relationship with James, another doctor. All around this archetypal story of the blooding of the new recruit is a welter of other ongoing tales: the conflict, for example, between the ambitious Vashti and the bullish Mark, and then a whole roster of other characters, from the sassy Rebecca to the wise Brian. There is even one doctor, the intuitive John, who himself falls seriously sick.

For most of its running time — and boy, there’s a lot of running as ambulances arrive and stretchers are wheeled on and wheelchairs whiz here and there — this is a play about what the experience of working in a busy hospital must be like. Emergency follows emergency: there’s a cardiac arrest, a sudden stroke, trauma from a big fall; a lung is drained and a testicle is removed. People in medical gear run on and off the set — lives are at risk, and some are lost. It feels powerful, compelling, the stuff of a dozen soaps.

At the same time, Raine sketches out some elements of a bigger picture. There’s a couple of poststructuralist passages about how doctors use language to help patients talk about their pain; bureaucratic procedures are shown to be life-threatening; medical hierarchies are questioned; medicine is described as if it was simply a question of performance; the mind is shown to control the body; there are echoes of ritual and folk medicine, talk of clairvoyants and horoscopes. Incidentally, the metaphor-rich title of the play refers to dangerous territory, such as the fearsome business of sticking scalpels near arteries during surgery. Sadly, this kind of more philosophical material is pushed to the margins as the experience of hectic emergencies takes centre stage.

Although Emily comes over as attractively idealistic, and her independent spirit is broken on the routine of the job, her character — played with real gutsiness and strong emotion by Ruth Everett — is the only one that gets any kind of real development. The rest of the large cast seem like walk-ons, or should that be run-ons? Still, there’s good work from Henry Lloyd-Hughes as James, Thusitha Jayasundera as Vashti, Adam James as John, Pip Carter as Mark, Sharon Duncan-Brewster as Rebecca, and Nicholas Tennant as Brian. As directed by Raine herself, this is an absorbing, action-packed drama that will make hypochondriacs queasy and the rest of us just plain nervous.