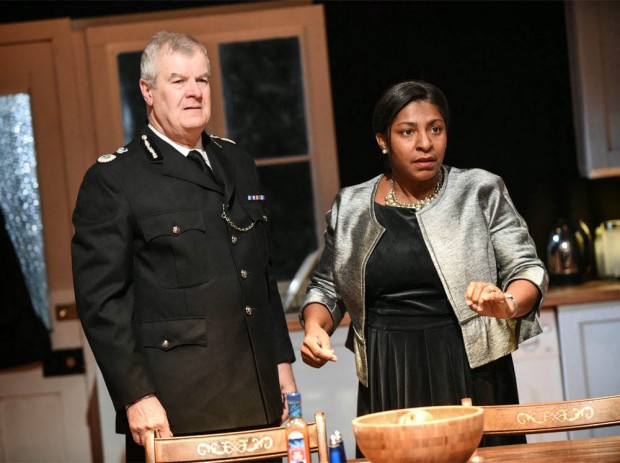 There are so few plays that explore ethical questions in a compelling way that when one does arrive it’s worth raving about it. Atiha Sen Gupta’s new play, State Red, which is currently playing in the Hampstead Theatre’s Downstairs space, is a brilliant account of a moral dilemma. Luke is an ex-cop, and the mixed-race son of Richard, a white top cop, and Joyce, his supportive black wife. When he returns home after disappearing for a year following the shooting of a young black man, he confronts his family — which includes his police colleague Matthew — with his version of the truth. As the play unfolds, with the forensic precision of an inquest, Luke’s version of events contradicts Matthew’s memory of what happened and everyone in the room has to choose between the truth and the cover up. Yes, this is one of those plays in which you’re forced to put yourself in the shoes of the characters and ask: if this was me, how would I behave? State Red is powerfully written, with a really intelligent questioning of issues around class as well as race. Like the best contemporary theatre, you instantly recognise that this is a perfect picture of the state of the nation. Directed by David Rintoul, it is excellently performed by a crack cast led by Samuel Anderson as Luke. You leave the theatre wishing the drama was slightly longer, but delighted that, like the best of Ibsen, it asks serious questions in a morally complex way about how we live our lives today.