Land of Our Fathers, Theatre 503 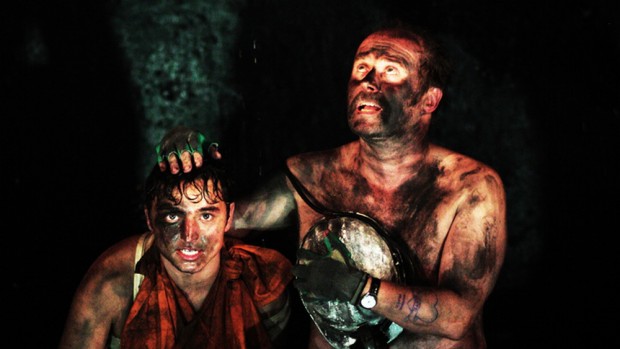 There are several signs that political theatre is making a comeback — and many examples of this can be found on the fringe. But the current climate does not favour didactic finger-wagging agitprop. Instead, today’s typical political play is written in a much more humanistic style, with often a fascination for history. At best, it is a fully rounded slice of working life — and a strongly compelling theatrical experience.

Chris Urch’s Land of Our Fathers, at the unfunded Theatre 503 in London’s Battersea, is a straight play, but a brilliantly written one. The situation is pretty stark: in a deep mine in South Wales, six miners are trapped after a rock fall blocks their tunnel. As they wait for help to arrive, the relationships and tensions between the men are explored.

At first there is some antagonism between Bomber, an old experienced hand, and Mostyn, a young man on his first trip underground. Because he admits to liking musicals, he gets nicknamed Julie (as in Andrews). The other miners — Hovis, Curly and Chewy — are led by their Deputy, Chopper, and at first their banter is all about sex, and about being rescued.

They divide up their rations, organise the precious resource of water and tend to their wounds — Bomber has a bad leg and Chewy’s arm has been broken. Then they organise shifts to dig their way out of the tunnel. Occasionally, when they are not working they sing, first an impromptu version of “My Favourite Things” from The Sound of Music and then a harmonious attempt at “Pretty Vacant” by the Sex Pistols. I loved these moments.

The date on which all this starts is 3 May 1979, the day of the General Election which brought Margaret Thatcher to power for the first time, so there is a clear political dimension to Urch’s play. However, he deliberately underplays explicit discussion of the Conservative victory, preferring the much more indirect and interesting route of showing how the ethos of the individual miners is a collective socialist one. But because the men are such well-drawn individuals they don’t all agree with this collectivist ideology, and there are strains between them. As their leader, Chopper, says at one point: “I know my place. It’s at the front. I steer this ship.” For him, leadership is earned, not given. But is his leadership enough to maintain the men’s increasingly fragile hope that they will be rescued?

Urch’s writing is beautifully controlled and he mixes laughter and sadness with a perfect sense of balance. His characterisation is convincing, his dialogues go straight to the point and the picture he paints of a workforce in a now forgotten industry is vivid and memorable. There are many good speeches which explore political activism, such as Curly’s: “Fuck policies. Fuck agendas, campaigns. What you have to do is ask yourself two basic questions. One. Do I trust this person? And two, can they relate to my needs?” This is as relevant now as it was then. As a snapshot of the state-of-the-nation on the eve of Thatcherism and the Miner’s Strike of 1984, as well as a play for today, this is compelling stuff.

As directed by this venue’s artistic director Paul Robinson, Land of Our Fathers is an excellent evening, both emotionally humane and thought-provoking. In the hot atmosphere of this small fringe theatre, Signe Beckmann’s claustrophobic tunnel set works very well, and the acting is superb. Patrick Brennan’s majestic Chopper is well matched by Kyle Rees’s lumbering Curly, while Clive Merrison as Bomber, Paul Prescott as the Polish Hovis and Taylor Jay-Davies as Chewy are all unforgettable. Joshua Price — who is still at drama school — plays the new boy Mostyn. Great stuff!