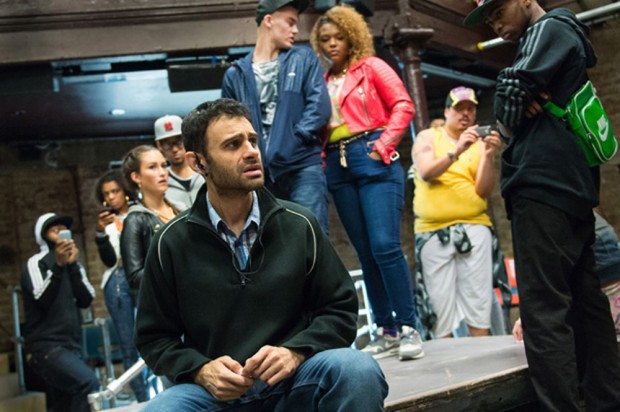 Dramatic national events such as riots tend to attract verbatim theatre practitioners like smashed shop windows attract looters. In this new play, Alecky Blythe — who specialises in recording ordinary people and editing their words into a humane story — takes to the streets to see what people were saying during the English riots of summer 2011. The main problem at the outset is that citizens armed with new digital media have already filmed and recorded memorable scenes from these events. So does Blythe have anything to add to what we already know?

The first thing you notice is that director Joe Hill-Gibbins has remodelled the Almeida auditorium to create a theatre-in-the-round, a device that is now becoming trendy to the point of cliché. The second thing that occurs is that Blythe puts herself into the story, and — in a piece of dismaying literal-mindedness — plays herself on stage, giggling nervously as she takes her dictaphone for an airing. She then recreates one of the initial rehearsals for this play, explaining how the edited voices of her interviewees are piped into the ears of actors through earpieces, enabling them to reproduce the original accents and intonations as closely as possible.

Then the story of the riots begins. As well as showing random encounters during the disturbances, Blythe focuses on a community meeting, which has been called in order to support Siva, a local shopkeeper whose store has been comprehensively looted. We see a middle-class couple, Tony and Sarah (played by Imogen Stubbs), organise fund-raising, ably supported by a local councillor and the rector of Hackney, East London. A BBC Radio 4 reporter hovers; other people muck in. It’s all very English.

Outside the ethnic landscape is more mixed: there’s a Turkish shopkeeper, a Romanian migrant, a West Indian matriarch, a black barber, mixed-race kids — the familiar kaleidoscope of London. As well as help for Siva, the most important event of the story is the organisation not of the street clean-ups, but of a party (funded by Marks & Spencer). There is a lot of loose talk about communities, a few banalities about class differences, a lot of giggling from Blythe’s stage character, and a kind of recognisable British stoicism that emerges despite the clash of ideas.

One of the problems is that the main protagonists are all irredeemably middle class. They are good at articulating their feelings, great at making pointed remarks and excellent at elaborate intellectualising. But you never feel that they really understand what’s going on. Sure, they talk about poverty; about the criminalisation of the Hackney youth; about the gap between rich and poor. But they patronise Siva rather than connecting with him. They just seem out of touch — and so does Blythe. I understand that she isn’t giving a straight account of the riots, but I must say that I’m much less interested in her brand of postmodern autobiography, with its predictable notions about truth being hard to uncover, than in what the kids were doing in the streets.

However professionally put together, with its chorus of 31 local volunteers as well as cast of top-notch actors, there’s something profoundly dispiriting about this piece. In a revealing final scene, Blythe rushes to interview the barber Colin on the afternoon when the results of the enquiry into the police shooting of Mark Duggan — which provoked the riots — are being broadcast. She hopes he’ll have a strong opinion. She’s a soundbite vampire. After all, he’s the one who talks about the disturbances being “a little revolution”. Disappointingly, he has nothing much to say. It’s embarrassing.

Little Revolution tells us nothing we didn’t know about the 2011 riots; it comes late after the event; it says more about the difficulties of recording people in stressful situations than about the events themselves; it seems to have no politics; worst of all, it has no imagination and lacks any metaphoric resonance. Blythe’s method of getting actors to speak the words of her interviewees seems more like an exercise in mimicry than in acting. And, despite being less than 90 minutes long, the play feels shapeless, banal and tedious. I was bored. More a poor reaction than a little revolution.