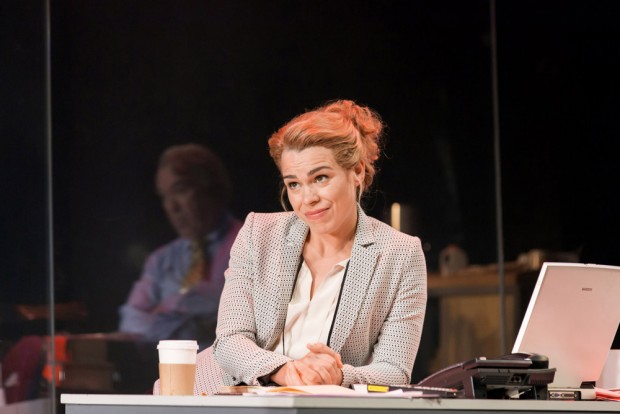 The National Theatre delayed the opening of this play about newspapers for two weeks as it waited for the results of the phone-hacking trial. Is this what a tabloid would call “legal health and safety gone mad” — or what a broadsheet would characterise as “a sensible precaution”? Either way, in the wake of last week’s verdict on former News of the Screws editor Andy Coulson, who was found guilty of phone hacking, Richard Bean’s new play is certainly timely. And it stars the charismatic Billie Piper, who can make a legal dictionary sound interesting.

Piper plays Paige Britain (geddit?), the young and ambitious news editor of The Free Press, a redtop not completely dissimilar to The Sun. Her editor is Wilson Tikkel (quite unlike Kelvin MacKenzie) and her proprietor is Paschal O’Leary (not a bit like Rupert Murdoch). As you can tell from the silly names, this epic satire is as lurid in its cartoonish detail as the lurid and cartoonish British popular press. It’s a tabloid play about a tabloid scandal.

Under the slogan of “We go out there and destroy other people’s lives — on your behalf”, The Free Press evolves from feeding the public’s relentless appetite for celebrity gossip into something much more sinister. Paige learns how to hack phones, and then a sensational murder case helps her sell more copies and brings her into contact with some pretty important policemen. When O’Leary appoints his red-haired darling Virginia White (no resemblance to Rebekah Brooks) to the editorship of the paper the plot jumps up a gear.

Bean has taken the phone-hacking scandal, added some instances of MPs’ expenses, changed all the names to protect the guilty and then written the whole affair as a cross between The Beggar’s Opera and a stand-up routine. It’s clever, it’s slick, and it’s often very funny. In Asian Met Commissioner Sully Kassam Bean creates one of his typically hilarious and wonderfully eccentric characters, who lights up the stage whenever he opens his mouth (usually to put his foot in it). It’s vivid, comic writing from the man who brought us the wonderful One Man, Two Guvnors.

In Piper’s hands, the amoral Paige is also an appealing character. She’s gutsy, she’s spiky, she’s sexy and she’s good fun. She also has no conscience and doesn’t care what she does — as long as it sells copies. Rarely has a villain been so attractive. Yet, after almost three hours of stage action, I have to admit that a certain tedium sets in. Tabloid humour, filthy language and sexual innuendo are best taken in small doses and this epic story sprawls at inordinate length. Some scenes are completely superfluous. It badly needs an editor. There’s a crudity about the satire that gets mighty tiresome and even the most jovial vulgarity can be boring after a while.

When, after ages and ages, Paige finally comes onto the stage to accuse the audience of complicity and complacency, no one seems to care. And this seems to be the general effect of the show: only the tasteless jokes about disability get a sharp intake of breath. Otherwise, we are all swept away by the one-liners, the video projections and the humorous headlines. But the effect is wearying in the end. And some of the jokes are simply lame. What’s lacking is any sense of real surprise; there’s too much finger-wagging — funny how populist satire can’t quite shake off the dead hand of Teacher.

Still, while not exactly challenging, there is plenty to enjoy in Nicholas Hytner’s vigorous and often charming production (designed by Tim Hatley), which opens without the usual previews. The cast is large and hardworking, with Piper confidently leading the audience through the story, and Robert Glenister (Tikkel), Aaron Neil (Kassam) and Dermot Crowley (O’Leary) all enjoyable to watch. The best bits — the Queen playing drums for the Hitler Youth and the laser-sharp jokes about Rebekah Brooks — are great, but I long to see an abbreviated version.