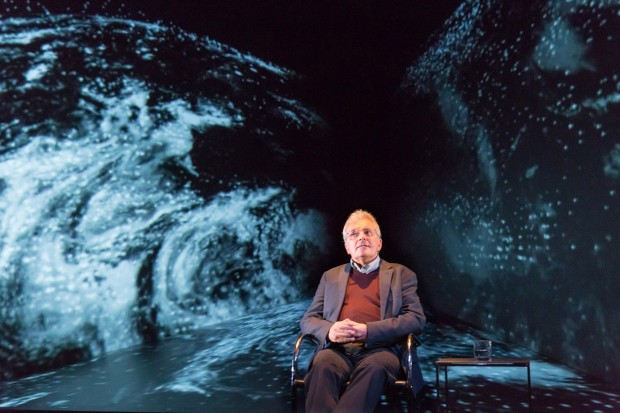 When science and the arts combine they form a new genre, which has the unlovely name of “artsci”. But although there have now been several plays about climate change in recent years, can an innovative partnership between a playwright, a scientist and a director throw any more light on a subject — global warming — that is vital, yet seems to leave most people cold. More tellingly, can theatre tell us anything about it that we don’t already know?

The title of the piece, 2071, comes from the idea that this will be the year in which, as the scientist Chris Rapley says, “my oldest grandchild will be the age I am now”. To show what the future might bring, Rapley, who is Chair of the London Climate Change Partnership and Professor of Climate Science at University College London, teams up with playwright Duncan Macmillan and director Katie Mitchell, whose previous “artsci” collaboration, Ten Billion — with scientist Stephen Emmott — was at this venue in 2012.

This time, like a good piece of verbatim theatre, the play focuses on the scientific facts of climate change. Sitting alone in the middle of the stage (no wonder the theatre was slow in releasing production photographs), Rapley outlines his distinguished career as a scientist, one with a particular interest in Antarctica. He then goes on to recount the facts behind global warming and climate change, explaining why we have to do something about it if our children and grandchildren are not to inherit a dead planet.

As everyone knows, the science behind this subject is very complex and Rapley, bless him, is authoritative rather than charismatic. His 75-minute lecture is systematic, but dull to the point of parody. In December 2015, 196 nations will meet in Paris to discuss climate change, blah, blah; maps of the Antarctic ice sheets show, blah, blah; 3.5 billion years ago, blah, blah; rising sea levels, blah, blah; 2 degrees of warming, blah, blah; hopeful signs of, blah, blah.

In this lecture, there’s no conflict so there’s no drama. The whole project displays a naive, almost breathtakingly so, belief in cool objective facts. Where have these people been? Don’t they know that science is always a contested territory, even when there is a great deal of consensus about some things, such as human-made global warming? But the things that are agreed on are banal — isn’t theatre meant to be about struggle leading to change?

Despite the dreariness of the lecture, a couple of human touches have emerged during the editing process. Rapley talks about having an atlas when he was ten years old in 1957: over the Antarctic landmass, pictured in white, were the words: “Region unknown to man”. Likewise, his account of flying over the south Pole and seeing a huge glacier breaking up, or of him breathing the air released when a sample of ice from a huge distance under the ice cap is brought to the surface, both testify to the human side of science.

Of the rest, the arty side of artsci is made up of dull videos, as monochrome as Rapley’s delivery is monotone, and some space music that would cause any teenager to cringe. Far from making anybody inspired to find out more about the subject, this show seems guaranteed to put you off. The conclusion, that science can only describe what’s happening, but that human beings must choose their own future, is flatly platitudinous. And the aftertaste is also sour: there is something both pretentious and elitist about those who believe they have all the answers. It’s like a new secular religion, and it stinks.

When Vicky Featherstone, artistic director of this venue, announced that she was devoting this autumn and winter season to exploring the theme of revolt and resistance, I welcomed the prospect of plays whose imaginative metaphors would stimulate our political understanding. Sadly, this is not happening. Instead the Royal Court has become a place of gesture politics, of soft socialism, where preachy lectures numb the mind. Wouldn’t it be nice if, just for a change, this so-called writer’s theatre actually staged some exciting new writing?