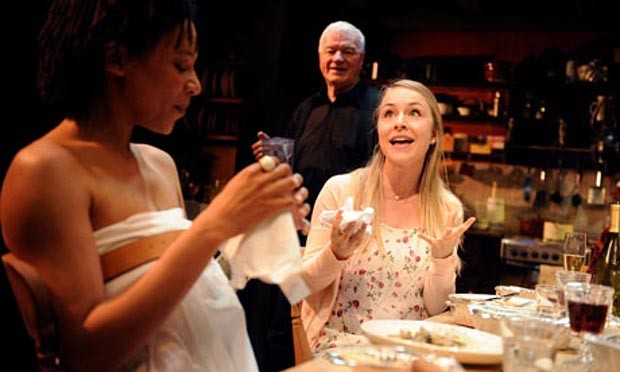 Usually, naturalistic stagings are seen as low risk. No big visual metaphors to fall flat, no auteurish effects to annoy the critics, no straining after effect. But, despite this commonsensical approach, naturalism can have its drawbacks. Last week, I went to see Alexi Kaye Campbell’s Apologia (Bush), a family reunion play set in a kitchen somewhere in the English countryside. Clearly, the set (by Peter McKintosh) was a rather attractive kitchen with a big table and the usual furnishings. So far, so naturalistic. When the audience arrived, they recognized instantly where they were. Some even said that they would like a kitchen like this in their own homes. In fact, the director Josie Rourke’s use of real food (Chinese takeway for an evening meal) and toast (for breakfast) added to the atmosphere of this most intimate of theatres. You could smell, and therefore almost taste, what the characters were eating. But, as I said before, naturalism has its own risks. At one point a character was saying her lines when she was upstaged — by a toaster. As she paused in her speech, the toast popped up. A lovely piece of preposterous punctuation. It took a real effort not to laugh.