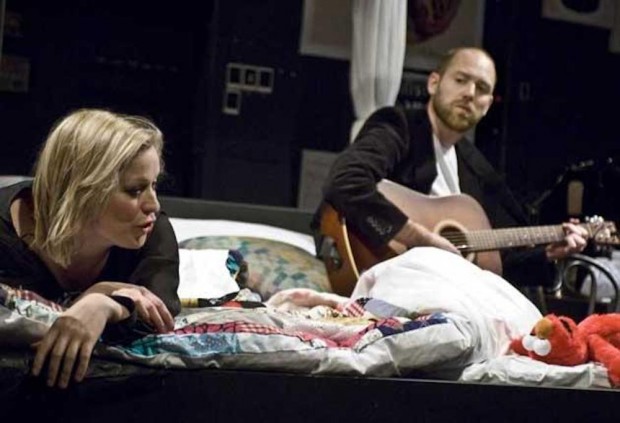 What are the politics of rom-com? Are modern romantic comedies just lame adverts for the failing institution of marriage, an attempt to boost weddings, which in our consumer-squashed age invariably cost much more than you want them to? Or can rom-coms also be a serious exploration of love, one of the core human emotions? In David Greig and Gordon McIntyre’s delightful Midsummer, music helps us digest the food of love.

The story starts with a man and woman in bar (nothing new there!). Helena is a divorce lawyer and Bob is a petty criminal. Coming from opposite ends of the social spectrum gives their affair a representative quality, with drink being the great uniter of these lost Edinburgh souls. Over one long rainy Midsummer weekend, a drunken one-night stand turns into a chase movie, with pauses for meditations on desire, human needs, the rom-com in fiction and the power of money.

It’s a comedy, by turns wry, knowing and often hilarious, and Gordon McIntyre’s songs and music give it a transcendent feel that lifts it way above the vomit-spattered pavements that its characters cross, and often contribute to. As Helena arrives at her sister’s weeding with a heavy hangover, and Bob attempts to bank £15,000 of illegally acquired dosh, the narrative confidently flies in the face of coincidence — and the two keep meeting each other.

As representative figures of today’s Britain, the female lawyer and the poetic crim are both pushed away from and pulled towards the family. Helena both wants and doesn’t want the baby she thinks she’s conceived during her affair with a married man (an obvious refuge from being married herself) and her attitude to her sister’s wedding is hardly supportive. Similarly, Bob has an estranged son from his failed marriage, and doesn’t exactly want to repeat the experience. These are real commitment-phobes.

Yet, such is the power of romance, that you can feel the pull as this odd couple get together, and the hormones fairly dance as the music kicks in. The fact that the show is so compulsively watchable is down to the actors in this two-hander: Cora Bissett plays Helena with a perfect understanding of the character’s loneliness, as well as a handful of other characters, from a local hoodie to a chirpy weathergirl. Matthew Pidgeon thoughtfully conveys Bob’s poetic aspirations, and his essential neediness. Onstage, their chemistry is heartwarming and the result is almost two hours of feelgood joy, with peeks of sublime emotion (don’t be ashamed of crying!).

Of course, Midsummer is also a love letter to Edinburgh, and the city squats like a beautiful, if rain-soaked, third character in the drama. No surprise that it has come down from the Traverse. Greig’s text — directed by the playwright and designed by Georgia McGuinness — is a very Scottish mix of vaudevillian direct address, gutsy narrative and big acting, as the characters share their thoughts with us. It’s a rollocking urban tale that mixes earthy realism with sudden vistas of acute feeling, from the longings expressed in the songs to the solitary sadness of the two main characters. Of course, this is not a play that gives a realistic picture of daily life in Scotland: it’s a fantasy story and, because of that, gives us a superbly enjoyable reminder of the way that love can tear you apart.