Home » Reviews » If There Is I Haven’t Found It Yet, Bush Theatre

If There Is I Haven’t Found It Yet, Bush Theatre 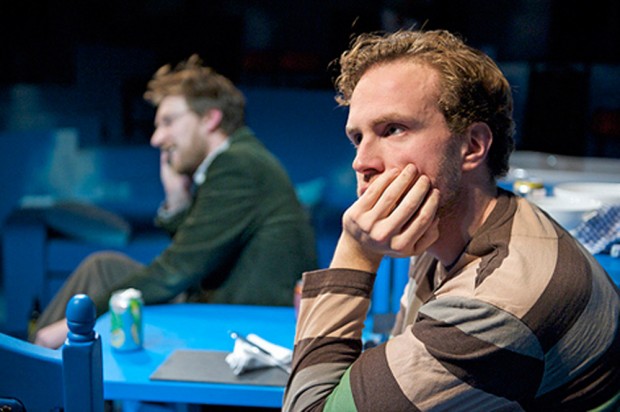 Family life can be bad for your health. Especially if you are an overweight teenager. Take Anna for example. She’s 15, a bit on the plump side, and having a rough time. At school, where — horror of horrors — her Mum is a teacher, she’s attracted the attention of some bullies. But worse than unwelcome attention is parental neglect: her Dad is too busy writing a book about saving the planet from climate change to pay much attention to his daughter, or his wife. But help is on its way.

When Anna’s wired uncle, Terry, comes to stay, things start to look up. At least he talks to her. And stands up for her. And tells her how to handle boys. And what to do on a first date. But Terry also has problems of his own: he’s fixated on an ex-girlfriend who is not keen on seeing him again. You can see why: he torched her new man’s car. Slowly, as Terry and Anna, this contemporary odd couple, get closer, things begin to change, and Anna gets her first lessons in heartbreak.

Nick Payne’s beautifully observed play is an engaging mix of wild, drunken hilarity and sobering sadness. Written with impressive confidence, the story bounces off the joys of transgression and into the arms of seriousness, often within a single sentence. As well as showing us the familiar contours of teen angst, it also dips its toe into the more troubled waters of depression and marital break-up.

As Anna, Ailish O’Connor delivers a restrained and convincing performance, her eyes shining with infatuation or stricken with disappointment. Compared to her calmness, Rafe Spall is a mesmerising stage presence, in equal degrees appealing and appalling. His drunken rants are excruciating, and highly entertaining, both at the same time. When he’s not on stage, he’s sorely missed — by us as much as by Anna.

The relationship between her parents, with the sensible and sincere Fiona at odds with the goofy, fanatical George, leaves more to the imagination. Central to the play is the contrast between eccentric George’s quiet determination to save the planet by never going on holiday abroad, and the mess of his private life. One of the play’s messages is: activist, save thyself. But the struggle of Fiona and George to make their marriage work is as deeply felt as their clumsy attempts to reach out to their unhappy daughter. Her situation, and her discontent, is familiar enough and, just as George can save neither the planet nor his marriage, so his brother Terry himself needs saving. After all, it’s easier to give advice to a 15-year-old than to sort yourself out.

Josie Rourke directs flawlessly on Lucy Osborne’s amazing set, which spreads across the entire theatre space, its wash of sky-blue colour urging escape from smalltown life while its many hanging lamps glow or dim every time climate change is mentioned. Psychologically acute, often funny, this is an evening that is both bruising and enjoyable.