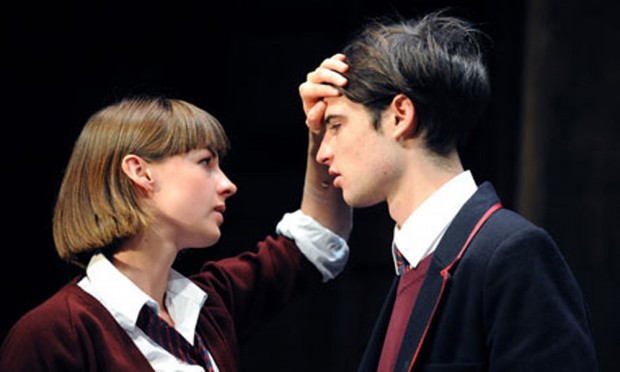 Is youth wasted on the young? Well, precious few grown-ups who watch Simon Stephens’s new drama, Punk Rock, will develop a sudden urge to be a teenager again: his portrait of a group of middle-class youngsters is every parent’s nightmare. They are either foul-mouthed and aggressive bullies, or deeply troubled neurotics — and the gradual escalation of their conflicts ends in the kind of mindless violence that in real life stays on the front pages for days.

Set in a Stockport grammar school, on the eve of A-level exams, the play starts off with the tender encounter between two 17-year-olds, local fantasist William and newcomer Lily, who has just arrived from Cambridge (where her father was a don). He asks her out; she says no. When he discovers that she’s going out with another boy, the athletic Nicholas, the temperature rises. Meanwhile, another boy, the arrogant bully Bennett, is tormenting both the school swot, Chadwick, and another girl, Tanya. Very slowly, the tensions rise and boil over.

It has to be said that Stephens is less interested in the state of British schools than in the clash of individuals within an isolated group. This is not a journalistic issue-play, but a study of emotional tensions. Despite their comfortable backgrounds, his teenagers are a tight fistful of fears, from the dread of failing exams to discontent with body image, and from the acute anxieties over sexuality to self-harm and homicidal rage. As such, they symbolize the fears of parents, and present a snapshot of a Britain beset with dread.

At one point, when William discovers that Lily burns herself with a cigarette lighter, a rare moment of empathy and hope radiates from the stage. More typical moments, however, are those scenes in which Bennett exults in humiliating his classmates, and the provocative episode which climaxes with him spitting at Tanya draws gasps of outrage. Whether these kids are mocking the local chavs, or dreaming of escape from Stockport’s claustrophobic confines, there is a nihilistic undercurrent that tastes like black bile just below the surface.

And although Chadwick’s apocalyptic vision of a future Britain ripped apart by social breakdown is balanced by an optimistic speech from Lily, which concludes that 99 per cent of young people are alright, the disturbing violence of the play’s ending is shocking enough to stay with you long after you leave the theatre.

Yes, this is a play that will split audiences. Older spectators might seriously question whether it is right to show such nihilistic violence without providing a rational reason for it. In fact, Stephens expressly rejects any explanation for the events he puts on stage. For younger audiences, this seems to be less of a problem, and they are bound to recognize these characters and the uncertainty, rawness and fierceness of their emotions.

The youthfulness of the story is enhanced by the youth of the actors, several of which are making their professional debuts. Tom Sturridge’s naïve William, Jessica Raine’s mixed-up but passionate Lilly, Henry Lloyd-Hughes’s vicious Bennett and Henry McEntire’s brainy Chadwick are well supported by Katie West’s Tanya, Nicholas Banks’s Nicholas and Sophie Wu as Bennett’s girlfriend Cissy. The callowness and vulnerability of the cast add a gauche sensibility to Sarah Frankcom’s thrilling, if slightly uneven, production which, for all its imperfections, bears its youthfulness like a badge of pride. And its gothicky design by Paul Wills is beautifully atmospheric.

Punctuated by blasts of rock music from the likes of Sonic Youth, the Stooges and the White Stripes, Punk Rock conveys a wild sense of the hormonal confusions, anarchic fantasy and psychological precariousness of British teenagers today. For all the awkwardness of the acting, this is a play that sticks your fingers into an electric socket, and holds them there. If you’re young, it will speak directly to you; if you’re not, it will make you glad of the fact.