The Power of Yes, National Theatre 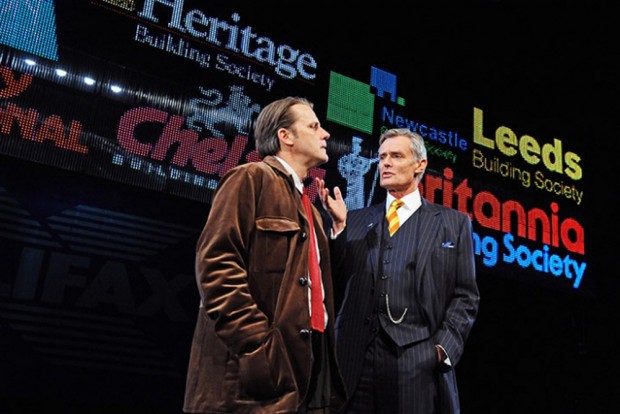 David Hare is one of the giants of contemporary British theatre. His skill is to be the Balzacian social secretary who records the mood of the day. And his recent work has examined the state of the nation in a poetic rather than a literal way, with the result that it has usually been emotionally powerful and resonant. Whether the subject is Thatcherism in Skylight (1995) or New Labour in Gethsemane (2008), Hare is the man the National Theatre calls whenever it feels the need to update us on the temperature of the times. But tonight, as his new play, The Power of Yes, opened at the nation’s flagship venue, the literal facts for once seemed to get the better of poetic truth.

The Power of Yes covers familiar ground: about a year ago, the financial institutions of world capitalism hit the buffers. Why, and how? To guide us through the mysterious and complicated world of sub-prime mortgages and credit default swaps, of hedge funds and leveraged banks, the National asked Sir David to write, in the words of their publicity, “an urgent play” about the worse economic collapse in over half a century. And here it is.

Hare comes up with a work that uses a mixed bag of skills: there’s a lot of everyday journalism (interviews with the heavy hitters of global finance) plus a dash of drama (okay, so it’s not a tragedy, but it does make a good story). As in his previous plays, The Permanent Way (2003) and Stuff Happens (2004), Hare has talked to the main players, this time the fat sharks of the financial world, and distilled his interviews into a series of spiky scenes that illustrate the power of money, the illusion of prosperity and the almost unbelievable fact that, in his words, when “the banks went bust, capitalism was replaced by a socialism that bailed out the rich alone”.

The good news is that Hare is a brilliant editor. Assembling his verbatim material into a coherent tale, he revisits well-known landmarks, from Wall Street to Threadneedle Street, and journeys from cheated homeowners in the United States to industrious savers in China. Look, there is Northern Rock. Oops, it’s gone. Look, there is Fred Goodwin. Oops, he’s off. And look, there’s Gordon Brown. Oh, he’s still here. The biggest laugh comes from the idea that the employees of Lehman Brothers were not taking away their possessions in those large cardboard boxes, one of the iconic images of the past year, but looted foodstuffs from their canteen!

To humanise this slice of contemporary history, Hare puts himself into the show, and the play is less about the actions of bad bankers than about the Author’s attempts to put together his story. As played by Anthony Calf, Hare comes across as sincere, inquiring and not averse to laughing at himself. One of the best jokes of the evening is about his dismissive attitude to theatre critics. His chief guide to the world financial system is Masa Serdarevic (played by Jemima Rooper), the 23-year-old journalist who leads him, and us, into the rarified regions of high finance.

Angus Jackson’s production — designed by Bob Crowley — features a large cast, impersonating the household names that have led us into disaster, and an equally large array of theatrical projections. Men in suits are rarely easy on the eye, but Jackson has understood that if you keep them moving fast enough, the audience will soon forget about their dubious taste in ties. Instead, the chief delight of the play is its ideas. This is one for the cerebrally inclined: a thrilling, and depressing, story told with wit and wisdom. It’s great entertainment, even if it adds little to what we already know.

So what’s missing? For me, the main lack was any sense of urgency; I never felt angry that my life was now on the line. At one point, the symbolic image that flashed up was of the queues outside Northern Rock, yet the voices of such people were not invited to this particular party. Instead, we have an account of economic collapse told by the powerful and the articulate. Somewhere, out in the cold, the others remain. Who will tell their story?