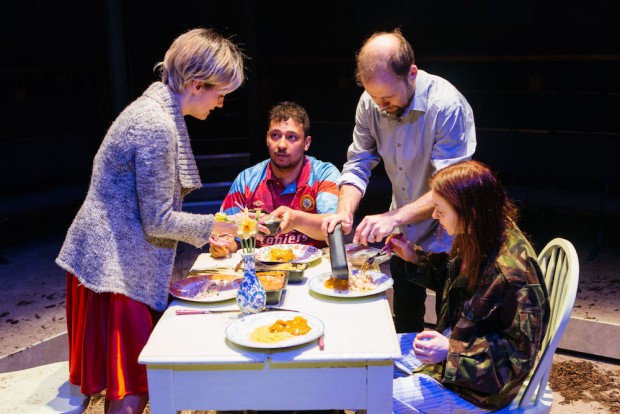 The Orange Tree Theatre is a champion of new writing. Under artistic director Paul Miller, the venue has put on plays by excellent new writers such as Alice Birch, Alistair McDowall, Elinor Cook, Brad Birch, Zoe Cooper, Deborah Bruce and Adam Barnard. Key to the encouraging of new voices is the Orange Tree Writers Collective, which helps playwrights develop their talents. One of its graduates is Joe White, whose debut, Mayfly, is a family play that although marketed as “ethereal” is actually much more rooted than that. It also expresses a deep sense of loss. And, with its title in mind, shows how some things can change in a single day.

Set somewhere in the middle of Shropshire, on a quiet Sunday in early May, the story is about a forty-something country couple, Ben and Cat, who have a 25-year-old daughter, Loops. Today is exactly one year since the family was hit by tragedy. And their grief is palpable. In fact, they really are not coping at all well. Ben has decided that he can’t take it anymore and is about the drown himself in a local river, Cat keeps phoning a mobile and leaving messages that get no response and Loops (short for Louise) has borrowed one of her mum’s old party dresses and gone out. She’s looking for 27-year-old Harry, who works in the local pub, and she is set on seducing him. In one way or another.

Harry, an ungainly young man who is cringingly shy, has in fact already met another member of this collapsing family: in the opening scene he interrupts Ben’s suicide attempt. Saves his life. He then meets the two female members of the family in two separate incidents, each of which is toe-curlingly embarrassing. This social awkwardness is the emotional key of a story that deals with loss by showing its various effects on different people, creating ripples of quiet devastation and despair. In the final part of the 95-minute play, Harry is brought home by Loops, and finds himself in another fraught situation: a commemorative meal whose significance he doesn’t understand.

When Harry saves Ben from the river, he doesn’t know what to say so he starts chatting about dragonflies. Then the older man puts him right: mayflies. “Only live one day. Hatch in the morning, mate in the afternoon, die at night.” To which Harry replies: “Amazing what can happen in a day.” This simple exchange elegantly introduces the thematic unity of Mayfly, the way that all of the characters’ lives are affected by loss, even though each individual experiences pain in a different way. White pushes this idea further by having the characters wear different clothes — army camouflage fatigues, shiny red dress, a football shirt — as they try to armour themselves against hurt. For these are lonely aching souls, adults consumed by their feelings.

White writes the monologues and dialogues of the story with a great flair for the awkward embarrassments of incompetent social exchanges. His characters are so English in their emotions that you just long to give them a hug, but they are also given to flights of fantasy and eccentricity that momentarily light up the stage. From Cat’s belief in her horoscope’s message that “today a very special person will appear from out the blue” to Loops’ fixed idea that, when she was born, the doctor said that she was “hard as fuck”. Each character is given time to tell us about themselves, their experiences, their memories.

The form of the play, with Harry meeting each family member by themselves before sitting down to eat with all of them, covers a single day which means that there is little time for character development, and White’s implicit idea that only by opening your heart to strangers can you gradually heal your wounds is only fitfully demonstrated. His other message, derived from W H Auden’s poem ‘Musee des Beaux Arts’ (the one that starts “About suffering they were never wrong,/ The Old Masters”, and is reprinted in the programme), is that even when we individually experience catastrophe society just carries on regardless. To this he adds the insight that nature is indifferent to individual human agony.

While the central theme of the story, that grief takes a variety of forms and has to be slowly worked through, comes across strongly, Mayfly is not a perfect play. The socially awkward exchanges rapidly become repetitive, the story lacks dramatic punch and the characters cry out for deeper exploration. But these are pardonable faults in a debut play that is so rich in small pleasures: the story of Breughel’s Icarus retold, the black bin bag mistaken for a ghost, the nipple soulmates and the magic mushroom feast. At one point, Loops writes notes to help her on her date — in black ink on her bare arm. White’s complete empathy for the outsider, for the misfit, for the person who feels unreal, for the failures and lonesome ones, and his ability to convey shades of sadness, leaves you with a feeling of tender sympathy.

Guy Jones’s direction carefully controls this sense of undemonstrative desolation, while Cécile Trémolières’ dark set, a rather grotty sunken square which can be a river, a hill, a pub or the inside of the unkempt family home, is enhanced by trills of joyful birdsong and nice lighting touches. In this socially decayed if naturally beautiful rural world, Irfan Shamji’s tongue-tied Harry is completely convincing as a young man who’s out of his depth — and knows it. If the rest of the excellent cast, Simon Scardifield (Ben), Niky Wardley (Cat) and Evelyn Hoskins (Loops), each nurse their grief close to their hearts, they also convey the sliver of hope that change is possible. And give this imperfect new writing debut a rare, understated emotional force.