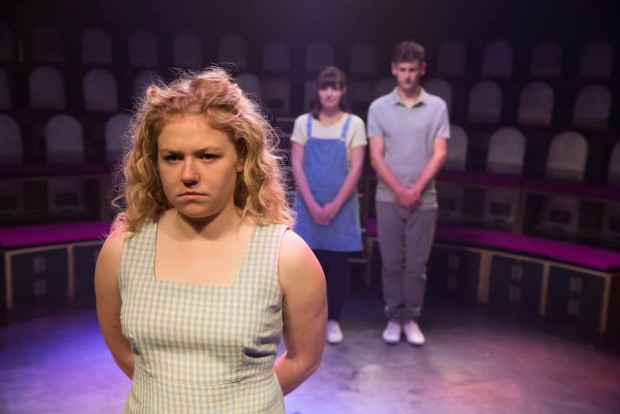 Hype is a dangerous thing. It often raises expectations beyond the reasonable, and disappointment inevitably follows. It also prioritises PR over artistic activity, putting the publicity cart before the creative horse, sucking energy away from plays to feed the marketing machine. Take the example of Paines Plough, a new writing touring company led by James Grieve and George Perrin, which — in a co-production with Theatr Clwyd and Orange Tree Theatre — have brought a trio of new work in repertory to this Richmond venue. Hyped as the product of the “de facto national theatre of new writing”, and a big success at last year’s Edinburgh Festival, do these plays live up to their billing?

Part of Paines Plough’s Roundabout project (a flatpack pop-up playing space with no props or costume changes which aims to bring plays to places that have no theatre venues), the repertoire is two adult plays and one piece of children’s theatre, all directed by Grieve. The best one is Elinor Cook’s Out of Love, a 70-minute account of female friendship, a relationship that at one point is memorably expressed as “that fire between two women”. Set in a small northern town, the play tells the story of Lorna (Sally Messham) and Grace (Katie Elin-Salt) from childhood playground to adult life, and spans some 30 years.

Although the working-class Grace is in many ways cleverer than the middle-class Lorna, she is the one to get pregnant as a teen and stay behind while her best friend goes to university and then makes a career by adopting one of Grace’s best ideas. Cook adopts a structure that jumps around in time, juxtaposing more than 20 scenes, each of which offer short but sharply contrasting snapshots of female rapport. Starting with a couple of hectic embraces, the story brilliantly conveys the cruel directness of children and their rapid changes of mood. As the girls grow up, the uncertainties of their teen years segue into the power games of their grown up selves.

Cook’s writing is a bit banal in its everyday details, but retains a strong emotional core that pulses movingly and deepens as this short play progresses. She writes very well about the physical sense of being a woman, self-conscious about body smells and body image, and doesn’t shirk the tempestuous rivalry that teens can experience. There’s also a welcome grace note of tenderness that runs through the play. Grace and Lorna’s attitudes to sex come across well — as well as their obsessive feelings of love and desire. It is a heartbreaking story impressively acted by Elin-Salt and Messham (with Hasan Dixon playing about eight male roles), although, given its length, it cannot be much more than a small play.

Similarly brief, but so much less satisfying, is Brad Birch’s 70-minute Black Mountain. Billed as a tense psychological thriller, it shows what happens when Paul and Rebecca (played by Dixon and Elin-Salt), a couple whose relationship is under strain, go to stay in an old house in the middle of nowhere in order to have some space to talk. Except that they don’t. Talk. Very much. It’s one of those bad ideas. As the house they’re staying in begins to feel haunted, a woman from their past makes an appearance. Quotidian irritations, gloomy exchanges and a sense of foreboding raise the expectations — but this short slight piece tails off badly. Instead of gothic horror we get lost in the mists of ambiguity.

Frustratingly, Birch pictures the wronged woman here as one of those furies that are as traditionally misogynist as Greek tragedy and as recent as Mike Bartlett’s increasingly preposterous Doctor Foster. To say that this is demeaning to women is an understatement; to say that it makes for good drama is simply untrue. For while the set up is interesting, the story evaporates into an inconclusive mush. Everything seems to be happening inside Paul’s head. Dixon plays him as a convincing study in untrustworthiness while Elin-Salt is Rebecca and Messham the mysterious woman. Using some good lighting effects and sound (thanks to Peter Small and Dominic Kennedy), Grieve directs an atmospheric production that is frustratingly low on suspense and decisiveness.

Also in Paines Plough’s three-piece repertory is Sarah McDonald-Hughes’s 50-minute How To Be a Kid, a play for younger audiences in which the same cast perform the story of Molly, a 12-year-old child who has to mother her sick mother. As the publicity says, the production features dancing, chocolate cake and an epic car chase. If this works well, and the play’s short length is no disadvantage, this comment on brevity is less true of the other two. Out of Love especially would benefit from at least 90 minutes of stage time. When you begin to get interested in characters, it’s a shame to let them go after a mere hour or so.