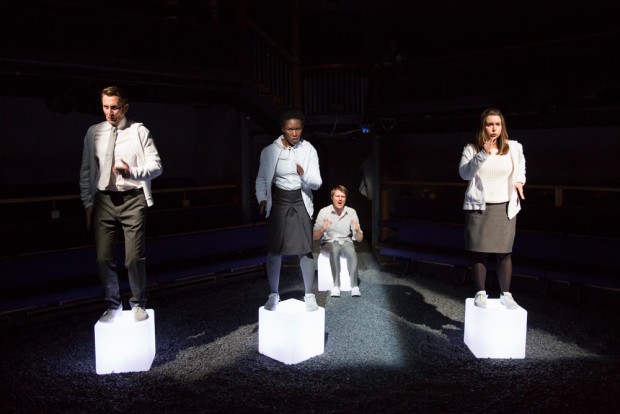 Sometimes, a playwright has a visionary moment. My favourite example is Leo Butler, whose play Redundant features an grandmother, who lives on a council estate and at one point says in exasperation, “Someone should bomb this bloody country. That’d wake us up a bit. Saddam Hussein or someone. IRA, bleedin’ whatsisface? Bin Laden. Yeah. He could do it. Drop a few tons of anthrax. Teach us what it really means to suffer.” On the press night, the reference to Osama Bin Laden was cut. And you can see why — it was 12 September 2001, the day after 9/11.

I had a similar double-take moment when I was watching Brad Birch’s wonderful new play, The Brink. Right near the start a couple of young teachers, Nick and Jo, are talking about a get-well card for a sick colleague, which happens to have a picture of Jesus on it. When Nick queries, “Jesus Christ?”, Jo replies: “What other Jesus is there?” And adds, “Jesus is Jesus. Like Prince.” Hearing this less than a week after the rock star has died feels once again as if the playwright had somehow been granted a glimpse of the future. Spooky.

In fact this is a play about visions. Or rather dreams. The 28-year-old Nick is a secondary school teacher who lives with Chloe, who is the same age and works as a project manager for Martin, a self-made businessman. When Nick starts having dreams about his school being blown up by an underground bomb, Chloe thinks he might be depressed, or just anxious. Nick’s head teacher, Mr Boyd, also thinks it’s stress, and Nick’s colleague Jo agrees. But Nick is taking his apocalyptic dreams very seriously, and when he voices and elaborates his concerns things begin to spiral rapidly out of control.

Although the play is only 75 minutes long, Birch has fully imagined not only the ins and outs of Nick’s mind, but also the characters who surround him. In a couple of excruciating episodes, the adult teacher confides in Jessica, a 15-year-old pupil, a gambit that backfires really badly. As Nick starts acting more and more strangely, not only do his thoughts jump around the stage, but the sense of place — the secondary school and The Brink, a patch of land that adjoins the main building — comes vividly alive.

There’s a strong metaphorical charge in this account of a man’s psychological collapse. Like Henrik Ibsen’s classic An Enemy of the People, Nick’s feeling of being right clashes with the social mores of compromise and resignation. You can almost sense a very English whisper of “Don’t rock the boat” emanating from every encounter. As a portrait of millennials, this story resonates with contemporary anxieties. Are we, say today’s twentysomethings, achieving our potential? Should we have a mortgage and family by the age of 30? Do we need to watch our weight and exercise more?

Yet such recognisable worries can’t stop the fear of what Chloe calls “stasis”, the sense that while this young couple doesn’t change the world is passing them by, nor the dread of death. And Nick’s anxiety about making changes in his life is also allied to the current political situation, where the age of austerity seems to hit Generation Rent much harder than anyone else, apart from the very poor. Likewise, current fears about terrorism are here represented as bad dreams, in fact dreams whose badness can unhinge the mind. If Birch’s play raises more questions than it answers, then it does so with enormous wit, charm and perception. Some moments are as hilarious as they are well observed.

Mel Hillyard’s well-paced production has a neatly abstract set by Hyemi Shin, who has covered the floor with grey chippings and uses versatile white light boxes as the main props. Ciaran Owens (Nick) and Shvorne Marks (Chloe) make a thoroughly convincing couple, and Marks doubles well as young Jessica, which has a psychological resonance, as does Vince Leigh’s doubling as Mr Boyd and the odious Martin. Alice Haig’s Jo is similarly just right, and the David Bowie soundtrack has an agreeably ironic slant. This is a small play, but a really beautifully written, dark and powerful one.

Talking of visionary theatre, and spooky coincidences: on 12 May 2016, an unexploded 500lb world war two bomb was found under the playground of a school in Bath — a very similar situation to the central dream fantasy of Brad Birch’s play. It was removed and defused, but thousands of local residents had to be evacuated.