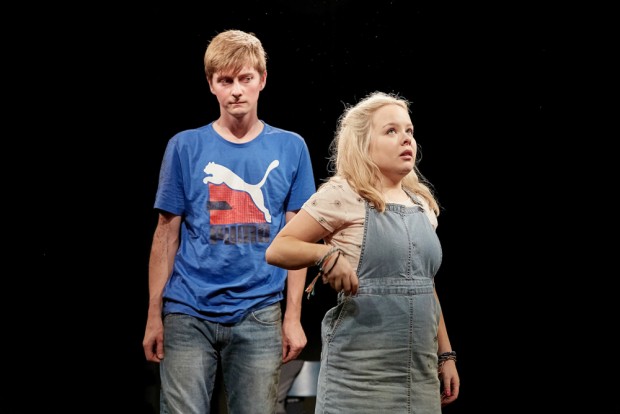 We’re living in the age of the small play. Although there are plenty of baggy epics around on our stages, they are outnumbered by the small and short two-hander, whether it’s John O’Donovan’s gloriously titled If We Got Some More Cocaine I Could Show You How I Love You at the Old Red Lion or the equally gloriously acted Counting Stars by Atiha Sen Gupta at Theatre Royal Stratford East. And, sure enough, the latest new play at the ever-enterprising Orange Tree, Zoe Cooper’s Jess and Joe Forever, is likewise small and short. But it is also a hugely enjoyable romcom.

The story starts with Joe and Jess as nine-year-olds, when they meet on the edge of a small river in Norfolk, where he lives and she is holidaying, and then follows this odd couple — he gawky and she super-confident — through the ages of 11, 13, 14 and finally 15, as they see each other every summer holiday. At first, they have almost nothing in common. She is a middle-class Londoner who goes to a private boarding school, and has a nanny. After Norfolk, her family has a “proper holiday” in Italy. He is the son of a working-class farmer, and attends a special school. During the holidays, he helps his father by digging ditches and putting up fences. The gulf of class, education and region seems insuperable, but gradually it narrows as both discover who and what the other really is.

Although the knowledge that this is a romcom means that the audience anticipates a happy outcome, Cooper deliberately plays delightful tricks with our expectations, in a way that is both joyous and highly emotional. The early scenes are a comedy of manners as we are introduced to the Norfolk locals, from Joe’s rather saturnine father to the horrendous Mad Michael, a shopkeeper who is also a thunderously religious bigot. Then there’s Ryan, who is apparently Joe’s best friend, and Mrs Evans, the village busybody. The contrasts between Joe and Jess’s backgrounds provide a lot of laughs — and her precocious utterances are a real joy. But there are also subtle mysteries: why is Joe small for his age, and why is he being bullied? Is he gay? And what family problems are being concealed by Jess’s perky know-all optimism?

But it is Cooper’s choice of theatrical form that raises this small narrative to sublime heights. As Joe and Jess tell the story of their relationship, they comment on it and each other, involving the audience in their occasional disagreements and misrememberings. In Derek Bond’s very funny and quietly intense production, deftly designed in a minimalist and increasingly muddy space by James Perkins, the initial laughs disguise the growing emotional tension of the piece, and as dark shadows begin to fall over the situation its ability to move us just grows and grows. By the end, I had to hold back my tears. The big themes of gender, and psychological damage, arrive as a surprise that has the awesome power — just like Jess’s well-judged blow at one point — to knock us right over.

As in Jon Brittain’s Rotterdam, the purpose of the play is to set up strong binary oppositions — in this case, city/country, middle/working class, female/male, straight/gay, overweight/thin, healthy/troubled — and then gradually question all of them. By introducing this complexity, the characters of Jess and Joe not only come across as more fully rounded human beings, but they also seem to become much more like each of us in audience. And the knowing humour of the meta-theatrical playwriting is a constant pleasure that is equally cerebral and gutsy.

In this 70-minute two-hander, Nicola Coughlan and Rhys Isaac-Jones are perfectly cast as the young friends, enjoying themselves in each other’s company on stage, and being convincing at every age they play. Coughlan is both radiant and naive, determined and anguished; Isaac-Jones is awkward, subjective and sincere — and these young actors blossom in the wondrous transformation scene towards the end of the show. Both not only play their own characters at different points in the story, but also their present selves, looking back at their younger lives, as well as all of the other characters. The effect is quirky, funny, moving and theatrically thrilling — a small play that packs a big emotional punch.