Home » Reviews » Vs, The Yard Theatre

Vs, The Yard Theatre 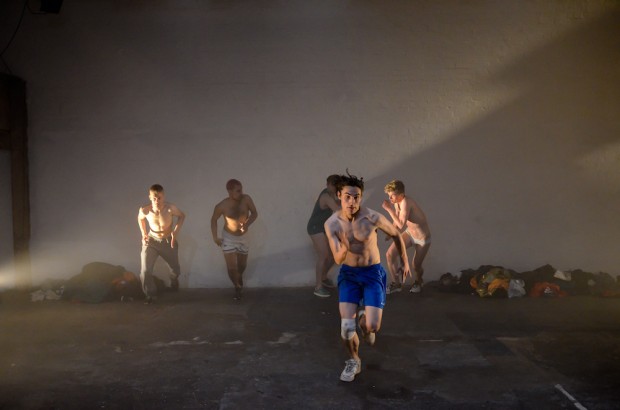 Ponyboy Curtis are a cult phenomenon. Chris Goode’s queer performance collective have won plaudits galore ever since they made their debut at The Yard in 2015. I’ve read wild accounts of how amazing their shows are, how transformative, how they make your journey home from the theatre sing with pleasure. How alive they are. How revolutionary. How beyond words. As usual, I’m a little late to the party, but I was curious to see what all the fuss was about. So, beyond all the hype, how good is Vs, their new show?

Instead of a programme, Goode has produced a photocopied mini-magazine, Tread Lightly, a tribute to punk culture in which he says quite bluntly, that this “isn’t the kind of programme you usually get at the theatre”: it has no credits, “the name of the performers are a muddle/ there’s nothing about who designed it/ who choreographed the lighting”. The reason? “Ponyboy Curtis don’t make the kind of performance usually seen on stage”. So that’s why. It’s a confrontational approach that challenges everything we might expect from radical theatre. But it also sets the bar almost impossibly high. Can Goode really be as revolutionary as the Living Theatre, as Gay Sweatshop, as Peter Brook even? The answer, sadly, is no.

In Vs, Goode uses the music of Igor Stravinsky’s modern dance piece, The Rite of Spring, whose original performance in Paris in 1913 caused a sensation. On a bare stone-floor set, there is a large circle of clothes, mainly causalwear, some designer labels, some underwear, and some shoes and bits like capes. It feels promising, like the place of an arcane ritual. After a few warm-ups, the six-man cast — whose names are given as Andre Ponyboy, Craig Ponyboy, Hector Ponyboy, Raphael Ponyboy, Samuel Ponyboy, Zack Ponyboy and Griffyn Ponyboy — roar into action.

After a long communal howl, the Ponyboys walk and run around the circle of clothes, taking some off, trying some on, and then they fling themselves into what’s called their “signature blend of revolutionary horseplay and boy-on-boy romance”, which is meant to “conjure an unconstrained love poem to the feral city and the queerness of the ground beneath our feet”. In fact, what they do is a kind of dance, which both celebrates a tough kind of masculine togetherness and satirises some of the ballet gestures of The Rite of Spring: there’s a lot of jumping, rigid gestures and mini-processions. No words are spoken, except for a late voiceover about desire, and that leaves only the ritual, maybe a queer version of, or comment on, fertility and on the original’s “Ritual of Abduction”, “Ritual of the Rival Tribes”, “Mystic Circles”, “Glorification of the Chosen One” and “Sacrificial Dance”.

Vs is a short but energizing piece of dance theatre. It’s fun, but it would be even more fun if it didn’t come clothed in the relentless hype that Goode and his admirers have created around the show. You are entitled to believe that queer performance is the future of British theatre, but really you can only believe that this kind of devised live art is brilliant if you have no historical memory whatsoever. However enjoyable, the Ponyboys are simply not as good as DV8, nor Matthew Bourne, nor Frantic Assembly, nor any number of more skillful devised dance groups. Their semi-erect pricks show that they are not even as good as male porn stars (or, am I being too heteronormative?). But they are touchingly vulnerable, and very committed: they do put their bodies on the line. But, for me, the show is too impersonal and too déjà vu. And I wish they’d drop all the hype.