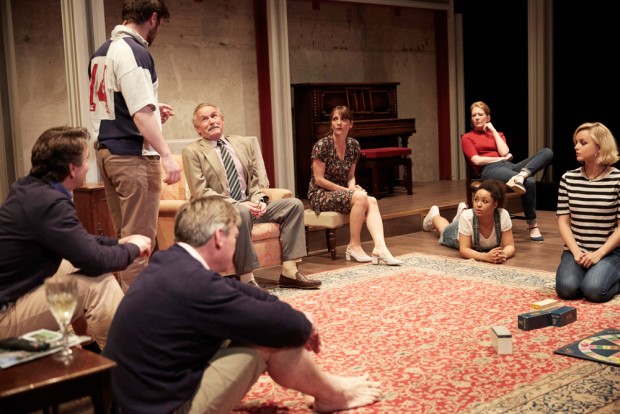 Celebrity casting is a time-honoured way of getting audiences to visit theatres. It is based on the liveness of the art form, on the desire to be in the same room as a famous person, breathing the same air, sharing their presence. This week, two plays, one in the West End and one Off-West End, enable us to get relatively close to Stephen Merchant — in the revival of Richard Bean’s The Mentalists — and to 1960s veteran Jane Asher in Andrew Keatley’s new play, The Gathered Leaves. Both these dramas also contain portraits of right-wing fanatics. An odd coincidence, or a sign of the times?

The patriarch, William Pennington, at the centre of  the drama is a singularly unattractive character. A lifelong Tory, he has lost one brother in the second world war and now — the play is set at Easter 1997, just before the electoral triumph of New Labour — is a semi-retired high-court judge whose health is failing. He has distinctly olde worlde views about family and about how to behave. Despite his encroaching dementia, he is determined to rule over his brood, the upper-class Penningtons.

On the occasion of William’s 75th birthday, his family gathers to celebrate. There’s his wife Olivia (Asher), and their sons Giles and Samuel. Giles has a wife, Sophie, and two children, 22-year-old Simon and 19-year-old Emily. On this anniversay, for the first time in more than 17 years, Giles and Samuel’s sister, Alice (played by Asher’s real-life daughter Katie Scarfe) and her teen daughter Aurelia, are also expected. Years ago, Alice transgressed against William’s strict moral code by getting pregnant outside of marriage and, horror of horrors, with a black man. Although these views are archaic, William is pretty unrepentant and Giles’s wife Sophie, for one, feels free to endorse them, to the disgust of her son Simon, who is much more liberal. Thankfully, Simon’s sister Emily has no problem getting on with the mixed race Aurelia.

Guess what, this play is about all of these things! It’s exhausting, and superficial because none of these promising situations is developed. So the experience of seeing this traditional family reunion drama is very odd. And very unsatisfying. Like Gary Owen’s Violence and Son, a far superior play, the story begins with a boy acting out his fantasies of Doctor Who. Then the young actors playing the boy and his brother are never seen again! It’s a very literal beginning to a very literal play. In fact its structure is much too pedestrian and several of the early scenes of exposition could easily have been cut. Then there’s a filmic sensibility to the writing that means that many scenes are broken off just when they start to get interesting. In the end, despite some very well observed tensions between different family members (especially good are the aggressive exchanges between siblings Simon and Emily), the story solicits our sympathy for William, but it never feels as if this sympathy has been thoroughly earned.

Defenders of the play will doubtless point out that it is a study of truth-telling — symbolised by Samuel, who like the similarly autistic hero of The Curious Incident of the Dog in the Night-Time simply cannot tell a lie — which contrasts with the family secrets that, in this genre, predictably come spilling out of the family mansion’s airing cupboard. But no one really learns anything from the moments, some rather good, of raw confrontation, and the genial air of forgiveness that hangs over the final scene feels anticlimactic in the extreme. And while it is nice to be reminded that in 1997 the Tory party was mired in sleaze, this alone is not enough to give the story a satisfying contemporary resonance.

Okay, Anthony Eden’s efficient production, designed by James Perkins, has some hilarious jokes and some quirky incidents, such as the second scene when William’s birthday cake arrives, having been made in the shape of the large country house in which the action takes place, or the rather more sentimental episode when Alice plays the piano, transporting her relatives back to the years of her youth. In general, the cast — which includes the excellent Alexander Hanson and Nick Sampson as the brothers Giles and Samuel, with Clive Francis as William and Tom Hanson (Alexander Hanson’s real-life son) as Simon — are able enough. But the play’s over-complicated range of incidents makes this a rather unsatisfactory evening, which never quite takes off.