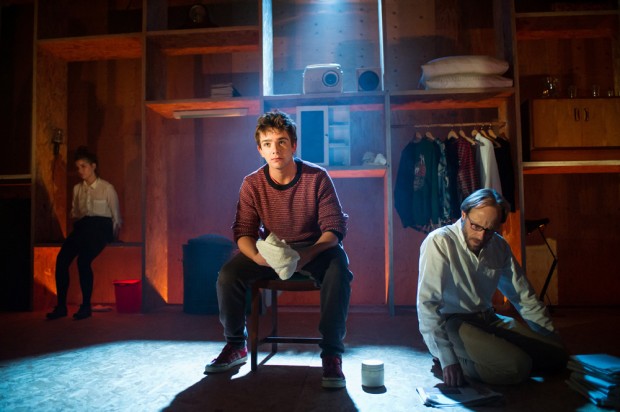 One of the most notable effects of the upsurge in new writing in Britain in the 1990s was inspiring playwrights all over Europe to try out their own versions of in-yer-face theatre. One of these was the young Marius Von Mayenburg, whose debut Fireface electrified audiences across Europe after its German premiere in 1997. Last Friday, I saw a revival of the English translation at the Young Vic. The play tells the story of a typical middle-class family: Mum and Dad have two teenage children, Kurt and Olga. Gradually, Kurt’s adolescent angst turns into a psychotic drive to burn down buildings and his rage against the parents becomes murderous. At the same time, the siblings begin an incestuous relationship which is very bad news for Paul, Olga’s boyfriend. This is a play whose wonderful text, translated by Maja Zade, is sometimes naturalistic and sometimes surreal and poetic. You feel as if you are entering into the minds of the kids, seeing the world through their increasingly aggressive eyes. Normality gradually becomes distorted and you begin to feel the flames warming your cheeks. In this production, directed by Sam Pritchard — winner of this year’s James Menzies-Kitchin Award for young directors — there’s an excellent mix of naturalistic stand-offs and more distant groupings which perfectly reflect the distance between the characters. At 90 minutes, the play is never boring, and the cast is great, particularly Helen Schlesinger as Mum and Aimee-Ffion Edwards and Rupert Simonian as Olga and Kurt. A wonderfully evoked nightmare.