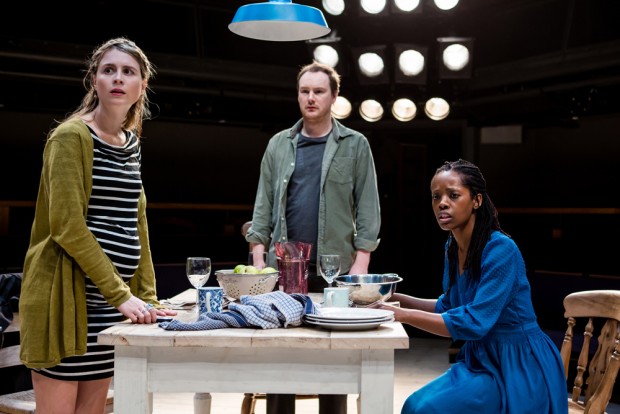 Ah, so this is Alice Birch. For a while now, I have been aware of her name, but somehow managed to miss all of her plays. How silly is that? I tried to catch up by reading Many Moons (2011) and that was good, then I tried to read Revolt. She Said. Revolt Again. — which was a big hit for her last year at the RSC — but on the page that innovative play only offers up half of its secrets. For once, you really have to see the work on stage — and I missed it. Drat!

This time, thanks to Paul Miller’s excellent programming at the Orange Tree Theatre, I saw her latest, Little Light, which is actually one of her first plays. Written just after she left university, it was her first full-length script. And it is a real revelation. Despite the influence of other playwrights such as Sarah Kane and Philip Ridley, here is an authentically original new voice. And, by contrast to the epic scope of Revolt. She Said. Revolt Again., the focus is deceptively domestic.

Every year, Teddy and Alison hold a special Sunday lunch at their seaside home to which they invite Alison’s sister Clarissa. Every year, they perform the same rituals, tell the same stories and make the same jokes. Even the food has to be the same. They find comfort from repetition, from sameness. But why do they need comfort? Comfort from whom? From what?

This year, some things are different for Teddy and Alison. For a start, Clarissa is pregnant; and her new man, the rather jovial Simon, has gatecrashed the event. The arrival of this uninvited stranger into the tight first of this highly wrought family, where Teddy is clearly suffering from a breakdown — making huge and manic building renovations to let in more light — and Alison is seething with resentment, precipitates the climactic showdown. But this description makes the play sound as if it’s a straight domestic drama. It isn’t.

Little Light is based on a very interesting playwriting device. Ostensibly, this is a very naturalistic piece, but for a great part of its short length it deliberately avoids one of the necessary duties of naturalism, which is clarity of exposition. Instead Birch uses a style of super-realism in which the characters don’t talk about what they themselves know. So her naturalistic play comes across as anti-naturalism. Neat! Yes, the excitingly original aspect of the play is that it deliberately doesn’t tell you what all the characters already know so that, like Simon, the audience finds itself in a strange place, dark with mystery and only gradually do we understand what is happening.

The truth, when it emerges, is horrible, and Birch not only presents this with great dramatic flair, but she also writes in a beguiling mix of sibling bitchiness and a real understanding of deep emotional undercurrents. Like the sea outside, there are great tides of feeling in this play. It heaves with sisterly rivalry, guilt and shame. Little Light also has its moments of comedy and its moments of gothic horror. The meal, cooked this year by the fragile Teddy, quickly turns pretty horrible, and the ritual of storytelling is a mask for avoiding the truth. The symbolism of the play is deftly interwoven with the plot, and never feels too heavy.

I used to use the word “gobsmacked” a lot in reviews. But now that word feels sadly dated. So very 1990s. Yet it seems to describe the effect of this play. Listening to these characters as they describe the past, and struggle to shrug off its repetition, its rituals, trying in a way to reinvent themselves, there are moments when you feel that you have got a blow to the face. Or, more accurately, a thump to the guts. Truth — we are told — will set you free, but it can also be deeply upsetting.

Atmospherically directed by David Mercatali, on a set where sheets of plastic (Teddy’s home improvements) lightly billow in the draughts and where doomy music keys perfectly into our sense of dread, the play has a great colour-blind cast: Paul Rattray (troubled Teddy), Lorna Brown (flinty Alison), Yolanda Kettle (feisty Clarissa) and Paul Hickey (jocular Simon). Wow, Little Light is a blaze. New writing doesn’t come much better than this! Note to self: don’t you dare miss Birch’s next play.