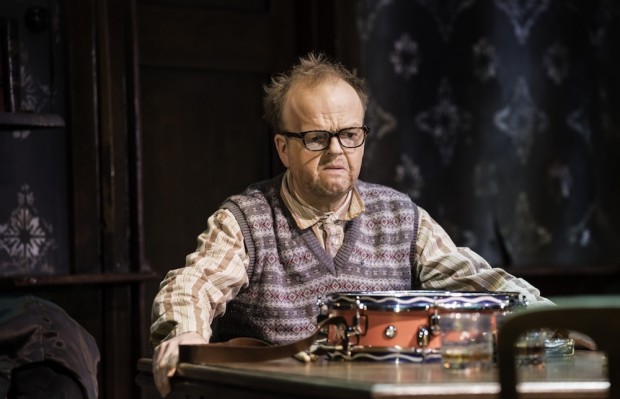 Is modernism dead and buried? Anyone considering the long haul of Harold Pinter’s The Birthday Party from resounding flop in 1958 to West End crowd-pleasing classic today might be forgiven for wondering whether self-consciously difficult literary texts have had their day. In Brexit Britain, where everyone is a populist now, there might not be much of a demand for difficult art, but people still seem to crave entertainment. So it’s good to see that this 60th anniversary revival of Pinter’s most canonical drama still works both as a funny situation comedy and as a thought-provoking disturber of the peace. And with a crowd of stars in its cast too!

Set in a seedy seaside boarding house, run by Meg (Zoë Wanamaker) and Petey (Peter Wight), the plot shows how Stanley (Toby Jones), an unwashed and washed up pianist, is visited by a sinister duo, Goldberg (Stephen Mangan) and McCann, who terrorise him into submitting to their demands. It’s a play about the power of psychological torture and the horror of the knock on the door that brings nemesis. It is also an absurdist drama, during which Stanley’s surreal birthday party — with surprise guest Lulu, the girl (or rather woman) next door — turns into an unexpected attack in the dark, as well as a comedy of menace in which words such as “succulent” suddenly acquire a crazy titillating lustre.

Years after the original production closed after a mere week at the Lyric Hammersmith, Pinter claimed that The Birthday Party was a political allegory, in which Goldberg and McCann represent the twin socio-political monsters of our time: Judeo-Christian morality and conformism, with a sense of oppression thrown in for good measure. In Ian Rickson’s extremely well-judged and starry revival, staged at the West End venue named after its Nobel-prizewinning author, the text is treated as if it is a new play, with the barnacles of accumulated preconceptions scrubbed off, and a freshness of vision sweeping through the whole show. The result? A thrilling evening in which every episode shines with new insights.

Although the opening scene, which introduces Meg, Petey and Stanley is played as customary for laughs, it is immediately clear that the performances are outstanding. Wanamaker and Wight are a completely convincing old married couple who have little new to say to each other, but who still care. When Jones’s Stanley arrives for breakfast, Wanamaker develops the feeling, grounded in the text, that she is a childless woman longing for a male child, mothering her sole tenant with a mixture of coyness and yearning. As the story develops, her absent-mindedness suggests the onset of dementia, her conviction that it is Stanley’s birthday perhaps being totally delusional. All three actors come laden with a feeling of loneliness, individual isolation.

In his buttoned up pyjama top, looking grubby and dishevelled, Jones’s Stanley comes across as a sad little boy, who resents being mothered but has a deep fragility: the minute he hears that Goldberg and McCann are coming to stay, all the fight goes out of him. He’s crestfallen and sits down. His habit of striking matches and gazing at the flame has the air of a dreamer and fantasist, someone who has already given up on life and retired from engagement. Every time Jones’s shoulders droop, or he makes a nervy gesture you just know that he doesn’t really have a chance. Stanley is wound up so tight, the slightest thing will make him snap.

Goldberg and McCann make an excellent contrast here: Mangan’s Goldberg is a big man with an easy domineering charm, a heartiness and bonhomie that is clearly put on, his smooth words empty of real sincerity. His stories are so much honey poured over any situation to sweeten the atmosphere and achieve compliance. Only occasionally does the mask slip: at one point he wags his tongue suggestively when talking about purity, and when Lulu sits on his knee he gets an obvious, and awkward, erection. Tom Vaughan-Lawlor’s McCann is smaller, thinner, much more gawky, with a fierce control, precise diction and an almost vampiric sense of repressed appetite — in his case for violence.

Pearl Mackie’s Lulu can do little with a part that is notoriously underwritten, and early Pinter is very much a man’s game. But she manages to deliver a performance as detailed and intelligent as those of the main characters. The moments of psychotic craziness and psychological breakdown are well staged and Rickson cleverly suggests the underlying ferocity and the essential sadness of the story. His aesthetic of heightened naturalism is reflected also in the set, designed by the Quay Brothers, which drips with grease and decay, so that even the morning summer sun is chilled when it hits the inside walls.

With its episode of a game of blind man’s bluff being both very funny and rather horrible, this is a Birthday Party for a generation brought up on The League of Gentlemen. There is a nightmarish clarity about the action and freshness of performance in which even the most surreal passages make sense while at the same time they continue to disturb. The stage pictures, helped by Imogen Knight’s movement direction, offer vivid and powerful images of domination and resistance that stay in the mind. A truly excellent revival. Okay then, Harold, I surrender, modernism is alive and well.