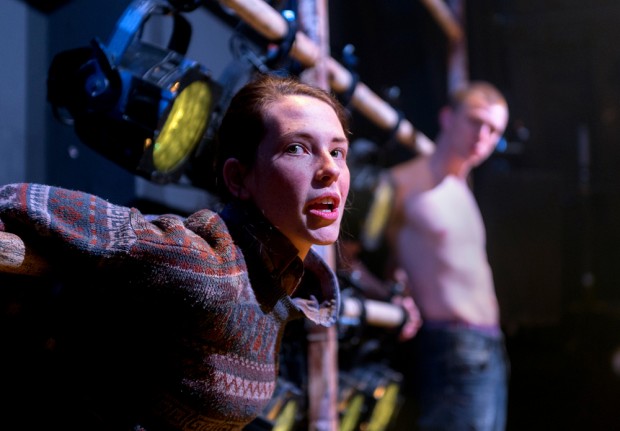 Feral kids are a media stereotype, but they make good strong subjects for drama. In Anna Jordan’s new play, which was first seen at the Manchester Royal Exchange last year after winning the Bruntwood Prize for Playwriting in 2013, we are introduced to two young brothers who have been abandoned by their parents. Hello Hench, who’s 16 years old; and hello Bobbie, who’s only 13. They have no father and their diabetic and alky mother Maggie stays away with a succession of boyfriends, the latest one called Minge-face Alan. As a symbol of their aloneness the two brothers have only one single T-shirt to their names — which they take turns to wear.

Hench and Bobbie live in a twilight world of video games and hardcore porn on an estate in Feltham. They don’t go to school, they nick food and drink from local shops, and they spend most of their time in one squalid room, which is dominated by a huge television screen. In the next room is their neglected dog (called Taliban “because he’s vicious — and he’s brown”). This snarling beast is like a primal id in the psychology of this picture of neglect and absence. Its offstage growling and barking presence seems to seep into the boys’ every minute, colouring them vile.

While Bobbie is hyperactive, Hench is more morose. The boys don’t wash, they don’t eat, they don’t clean up after Taliban. They have problems, big problems. Only one of which is masculinity. Despite some flashes of humour, it’s a pretty depressing story — that is, until Jenny appears. An animal-loving teen from Wales, she has also lost her father, but her mindset is different: she wants to help. She brings them fried food and something for the dog to eat, and doggie toys; she brings new ideas and a new feeling. When she says “I understand” I swear that mine was not the only heart to crack.

Jordan’s writing has an enormous vigour and vitality, with an emotional undertow that sucks the tears right out of your ducts. It’s raw, it’s rude and it’s often bleakly funny. But as some rays of light begin to penetrate the darkness of this squalid flat’s isolated world, your spirits lift even though you hold your breath. At some moments, such as the exquisitely sensitive sex scene, it feels like communion, or like watching a new life being born. But although the play has incidents of the greatest delicacy, like a little finger tracing a scar across a damaged young body, it also has confrontations of horrendous brutality. It’s touching, but also terrifying.

That said, it is also true that towards the end of the 100-minute show, the confidence of the storytelling begins to falter a bit, and a look at the playtext confirms that the production has never been able to solve this problem. Yet despite this wavering, Yen is still one of the most intensely felt dramas I have seen for a while. Ned Bennett’s production, which is designed by Georgia Lowe and is reminiscent of the hectic worlds of Philip Ridley’s Mercury Fur and Alistair McDowall’s Pomona, mixes imaginative staging (the dog is “played” by an electric bar fire, and two sets of gym bars enable the cast to move vertically around the claustrophobic confines of their isolation) with emotional truth. (And the title is explained too.)

Although the effect of the story is emotionally stunning, in a cooler mood you could perhaps object to two things: one is that the world of the play is so constricted and constrained that there is little sense of the society outside of the grotty flat. And, secondly, that it doesn’t really challenge the familiar stereotypes of working-class life. Although Maggie does fight against the effects of alcoholism, her kids — despite the feeble rays of hope — do seem to be doomed to an outcast life, while Jenny does sometimes veer dangerously close to an image of female sainthood.

Nevertheless, the acting is uniformly impressive, from Alex Austin’s downcast and deeply damaged Hench to Jake Davies’s manic but fragile Bobbie; and from Annes Elwy’s Jenny, whose idealistic willingness to heal is in sharp contrast to Sian Breckin’s Maggie, who seems quite capable of wrecking everything. Everyone is convincing and moving. What’s beautiful here is not the tawdry tale so much as the humane balance of hope and hopelessness, love and lovelessness, in a place where pain is deeply expressive and tenderness can be as disfiguring as violence. Exceptional. I now long to see more plays from Jordan’s pen.