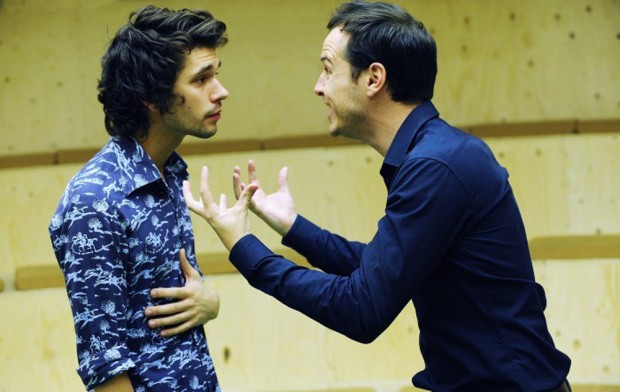 Last night, at the opening of Mike Bartlett’s new play at the Royal Court, there were plenty of opportunities for ribald jokes about the play’s title, Cock. It was also a welcome addition to a litany of in-yer-face Royal Court titles, which have already attracted parodies. A couple of examples: Mark Ravenhill’s Shopping and Fucking (1996) kicked off the trend, which was taken up by Gae Cleugh’s Fucking Games (2001). In the playtext of Simon Farquhar’s Rainbow Kiss (2006), there was a note that said that explains that his original title was Fuck Off. Oddly enough, he claims that he changed it “not because of an uncharacteristic prudishness on the Royal Court’s behalf, but because it was in danger of causing the play to be misperceived.” To which, the only answer is: yeah, right. Such titles have been deliciously parodied not only in Tim Crouch’s The Author (2009), which tackled the content of these kinds of play, but in a book by Christopher Douglas and Nigel Planer (no less) called I An Actor (written under the pseudonym of Nicholas Craig), which is a satire on British theatre today. Here, the author says he has been called everything from the “Blowtorch of the Barbican” to the “Uncrowned Vesuvius of the English Classical Stage”, and mentions one role in which he found himself “wading through a sea of syringes and crème fraiche” in a play called Fist F***ing which was staged — and you really get no prizes for guessing this — at the Royal Court in 1994. “I still have a burning need,” says Nicholas Craig, his tongue practically bursting out of his cheek, “to perform, to communicate and to immerse myself in all the roiling, squalid splendour of life — quite literally in the case of the notorious kitchenette scene from Fist F***ing”. A lovely reminder that these titles can never be given in full, without asterisks, on public notices — for fear of prosecution. Anyway, Cock has no such problems — and, oh, it’s a cracking play too!